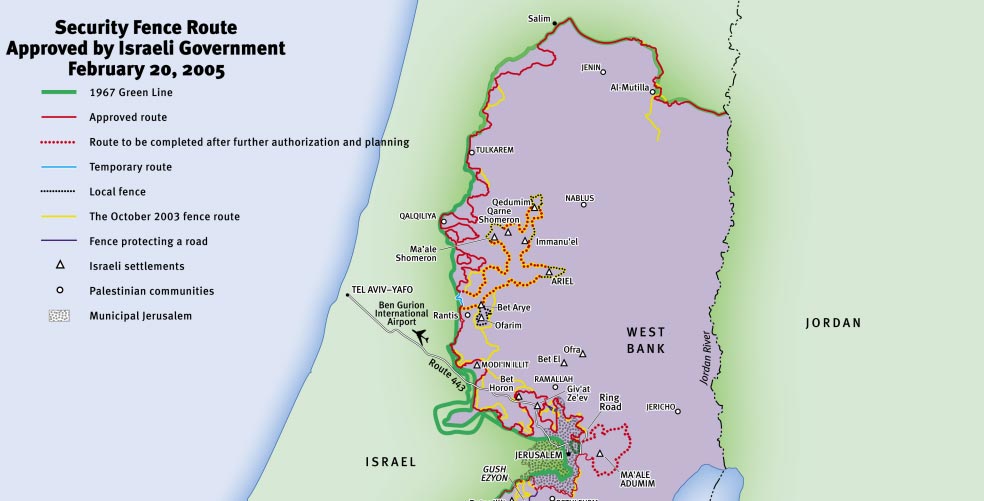 There is a code of silence about what is being discussed  ​when the US and/or the Israeli government discuss settlement blocs.

In March, 2005, Yuli Edelstein, then a deputy government minister and now the speaker of the Knesset, ​was the only Israeli official to warn about what “confinement to settlement blocs” means.

When Edelstein ​appeared at the Alon Shvut community center in Gush Etzion at the time,he reported to a stunned audience that the February 20, 2005 retreat decision of the Israeli government did not only apply to Katif and to four small Jewish communities in Samaria.

Edelstein warned that the February 20, 2005 Israeli government decision was to apply to all areas that Israel acquired in the 1967 war.

The new map, approved by the Israeli government, he said, was immediately posted on the web site of the Washington Institute for Near East Policy,

Without any further government decision, the Israeli government is authorized to order the IDF to implement the next stages of the February 20, 2005 Israel government retreat decision

A Prominent member of that Israeli government included Benyamin Netanyahu, now the prime minister of Israel, then the Minister of Finance.

Jewish communities slated for destruction under the 2005 Israeli government decision are spread throughout Samaria, Judea, Hevron and the entire Jordan Valley, demarcated on the National Geographic Atlas as parts of the “west bank”, alluding to the west bank of the Jordan River

That February 20th, 2005 retreat decision empowers the Israeli Security Establishment to implement surrender of almost all of Samaria, Judea, Hevron, and the entire Jordan Valley to an entity which remains in a state of war with the state and Israel.

In other words, the conclusion of current Israel Palestinian talks has already been reached.

Here is the Israel government approved retreat map which the government of Israel should share with the Israeli public, the Knesset, and the media.

IF people in Israel seek a legislative initiative to work on, the repeal of the Feb. 20, 2005 retreat map would seem to be a priority