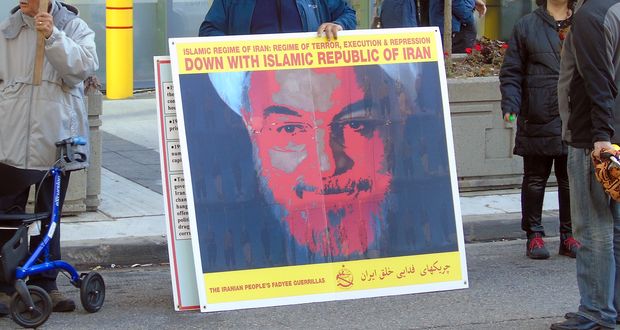 Rachel Avraham explains how the re-election of Rouhani was not really a victory for the Iranian moderates as it was portrayed in the Western media. At the same time, she examines, how will the Iranian election results affect the Palestinians, the Kurds and the greater Middle East?

Certain elements in the Western media have praised the re-election of Iranian President Hassan Rouhani, claiming that it is a victory for the moderates. For example, CNN described Rouhani as “a moderate” who was a “key architect of the 2015 nuclear deal with the United States, European Union and other partners.” The Washington Post and the New York Times also referred to Rouhani as a moderate and praised his re-election.

Iranian journalist Mohsen Bezhad Karimi does not agree with such assessments: “The Western media mainly those in line with George Soros, the Democrats and Carnegie etc. (which includes the Canadian government) portray him as a business partner. So they portray him as moderate. But what moderate do we see? What change in regional policy has there been over the past four years? Nothing! Where is the moderation of Mr. Rouhani? Domestic policies? There were 977 executions. Foreign policy? Yemen, Syria, Iraq, Hezbollah? Where is the moderation? It’s only a wrapping paper. Rouhani is only a nice shiny wrapping paper for selling the Iranian regime to the international community. If his opponent won, we would at least face the reality of the regime.”

Iranian journalist and human rights activist Kaveh Taheri concurred: “The Iranian regime decided to re-elect Rouhani for another four-year presidential term due to the international pressure on the Iranian regime to show off its glamorous face. Rouhani admitted in his TV debates with the other candidates that he has no control over the economy, security, military, foreign policy and the judiciary. The regime re-elected an akin to a wolf in sheep’s clothing, although Rouhani failed in his presidential promises to improve the economy and human rights in 2012.” Taheri claims that Rouhani is merely “a head fake” that the regime desperately needs to cover up its aggression in the Middle East region. According to Taheri, Rouhani has had blood on his hands: “He asked MPs to come out in support of commands to execute dissidents in public in the 1980’s.”

According to Karimi, none of the candidates were allowed to formulate original foreign policy ideas for the Iranian presidential elections. He emphasized that in the Islamic Republic of Iran, the president is a mere figurehead and only the Supreme Leader alongside the Iranian Revolutionary Guards has the right to formulate any kind of foreign policy. As Karimi emphasized, “If they were forbidden about talking about these issues in the campaign, how can they have any influence? How can they make any change?” Given this, he stressed that regardless who is elected, Iranian foreign policy will remain the same. They will still be chanting death to America and death to Israel. They will be still committing massive human rights abuses in Syria, Iraq and Yemen. They will still be propping up Hezbollah and other terror groups across the Middle East. He argued that the moment that any of these policies changes, then the Iranian regime will no longer exist and for this reason, there won’t be any changes.

Israeli scholar Dr. Mordechai Kedar stressed that the Iranian regime decides who wins each election in advance. Due to the election of US President Donald Trump, he noted that the Iranian regime presently feels the need to appease the world, to try to make a nice face, to hide their true intentions and this is why Rouhani was re-elected: “The Iranian elite is very much afraid especially now with Trump enhancing relations with the Saudis and the Emirates with all kinds of agreements and conferences. They are very worried especially regarding the arms supplies to Saudi Arabia, which might be dangerous for Iran. Hezbollah doesn’t help them and can’t face America. Russia does not help them as much as they want. At the same time, they want to absorb local anger for the oppression and corruption, which is why they promoted Rouhani, who has a nicer face than the other guy. This recent election was to flatter and smile to the world as if it can work.”

However, while the level of Iranian aggression across the Middle East region is expected to remain the same, Dr. Reuven Ehrlich, the head of the Meir Amit Intelligence and Information Center, noted that with the re-election of Rouhani, Iran will be distancing themselves from the Palestinians especially in the wake of the recent Hamas policy document and possible peace negotiations: “They don’t like it. Their interpretation is that Hamas changed its policy. The reformists, say, I told you so. Iran should be first and don’t deal with the Palestinians. They are suspicious towards the new document. It will get worse. If Mahmoud Abbas adopts the American track towards peace negotiations, the Iranians won’t love it. They won’t improve their relations. The honeymoon that was in the past doesn’t exist anymore. But on the other hand, they need Hamas and they have interests to be influential in the Gaza Strip, so we will see what happens. I think that if there is a genuine real peace process, Iran will do its utmost to undermine it via its proxies Islamic Jihad and possibly Hamas because if they have a common interest to undermine America, they will forget all of their difficulties. But if it goes nowhere, the interests to launch terrorist activities will not be as critical as under the first scenario.”

The question remains, how will all of these developments in the wake of the re-election of Rouhani affect the Kurds? Kurdish rebel Mohammed Alizadeh proclaimed, “For the Kurds, it makes no difference for all of the Iranian Presidents are liars. None of them do anything for the Kurds for they want a radical Islamist state and a Shia crescent in the Middle East. An estimated 13 million Kurds live in Iranian Kurdistan, making up 18 percent of the population but they are a majority among political prisoners. Of the 93 people charged with enmity against God in Iran in 2015, 63 were Kurds.”

Former EU MP Paulo Casaca also feels that there will be no change on the Kurdish front in the wake of the recent Iranian elections for Rouhani is just as hardline as the conservative faction and Iran’s Kurdish policy anyways is in the hands of the Iranian Revolutionary Guards, not the Iranian President: “The Kurds as usual will be played by the local powers Iran and Turkey. They will gladly use the Kurds as cannon fodder in their disputes.” He noted that Turkey recently built a wall along the Iranian border in order to keep the PKK out for that Kurdish group has training camps in Iran: “All of the established states there oppose Kurdish independence but according to their conveniences, they use the Kurds for harassing their rivals.” He argued that if Israel seeks to counter Iranian aggression in the region, then they should encourage Kurdish unity so that Iran cannot use Kurdish divisions for their own benefit. He stressed that the best way to encourage Kurdish unity is by supporting the Kurdistan National Assembly of Syria, which is a pro-Israel Syrian Kurdish group.

In conclusion, Iranian Canadian human rights activist Shabnam Assadollahi proclaimed: “On May 19th, millions of duped Iranians including those from religious minority groups went to the polls to cast their ballots and voted for the Islamic terror’s sham and illegal elections and once again gave the ultimate power to Khamenei’s regime by assisting him to select a Muslim cleric whose government executed over three thousand Iranians and committed genocide in Syria, Iraq, Afghanistan and Yemen during his 4 years of presidency from 2013-2017. Now that the Iranians inside Iran and abroad happily and voluntarily have endorsed the Islamic Sharia law constitution, anyone especially the women who voted for sharia law deserve to be ruled by those tyrants they elected and should not badger or complain to us about anything that happens to them. If they are not happy with the regime they fully supported and brought to power, they should find the solution themselves. I am among those Iranian born patriots who has never voted for the Islamic terror regime in Iran but was never allowed by Canada’s mainstream media to share my opinion. I will always remain as a true voice for Iran and as an Iranian patriot, I continue my fight for Canada’s sovereignty, freedom and be a loud voice against the Islamic Republic of terror from Canada. As Kahlil Gibran said: ‘You may chain my hands, you may shackle my feet; you may even throw me into a dark prison but you shall not enslave my thinking because it is free.’”