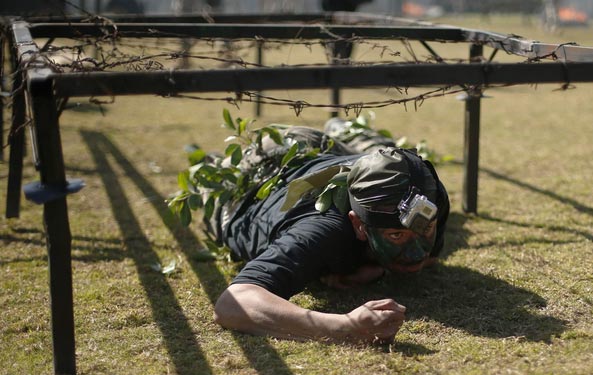 This year, as in previous years, summer camps were held throughout the Gaza Strip, attended by tens of thousands of Gazan children and adolescents. Most of the camps were organized by Hamas, some by other terrorist organizations and institutions.1 The camps provide a wide range of activities, from ordinary summer pastimes (sports, arts and crafts, computers, day trips, etc.) to military training and ideological indoctrination. Hamas attributes great importance to the summer camps, considering them an effective means for influencing the younger generation and training a cadre of operatives and supporters for its military wing and movement institutions.

An examination of some of the closing ceremonies of the 2017 summer camps shows they emphasized military topics coordinated to the age of the participants. The older the campers were, the more and varied military training they received. The adolescents, some of them who would join Hamas military wing in the near future, wore uniforms and learned how to dismantle and reassemble weapons. They also practiced simulating infiltrating Israel through tunnels, attacking IDF posts, taking control of tank positions, and capturing IDF soldiers and abducting them to the Gaza Strip. They trained with real weapons, mostly light arms and RPG launchers.

The various military tactics taught and the activities practiced were similar to the training Hamas has given its military and security forces since Operation Protective Edge. That may indicate that Hamas intends to use tactics such as infiltrating Israel through tunnels, taking over IDF posts and abducting IDF soldiers more extensively during the next confrontation with Israel.