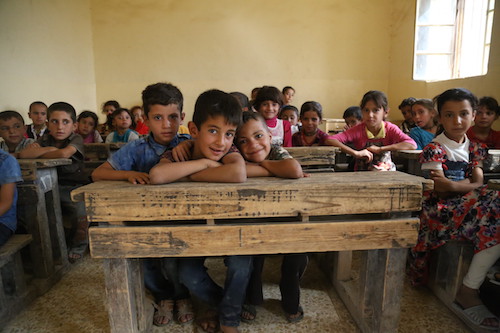 If tolerance and acceptance are not part of the educational system of Iraq, what kind of future does that country have?

While ISIS has been uprooted from most of Iraq, years of bitter struggles and wars have deprived an entire generation in Iraq. According to the Iraqi Institution for Development, in ISIS controlled areas, subjects such as history, geography, literature, art and music were removed from the curricula. They were replaced by Islamic law, physical fitness and jihad education. Military training, religious extremism and recruitment to the terror group was a major component of the ISIS educational system.

For example, a book used for 6-year-old children was titled “The Islamic State is Remaining and Expanding.” The illustrations in this book show children using weapons and wearing ISIS attire. An ISIS math textbook asked children the number of explosives needed to kill a Shia Muslim or an unbeliever in a suicide bombing. Furthermore, the plus sign was eliminated for ISIS claims that it references the Christian cross. ISIS deprived students of basic components to deal with the modern world.

As a result of this curriculum, many Iraqi parents opted not to send their children to school. Also the children who attended ISIS schools are lagging behind in their education and are traumatized from the entire experience of having their childhood robbed from them. There are horror stories of ISIS taking school children to watch executioners crucify and behead people. Aid workers stress that these children have nightmares to date from this experience. As a result, Iraqi children who have been liberated from the yoke of ISIS are several years behind in their studies.

However, there is a huge question mark whether the Shia Popular Mobilization Units that have contributed to liberating Iraqis from ISIS will be much better. Iranian political theorist Reza Parchizadeh noted that Nouri Al-Maliki is close to the Iranian regime: “He incites hatred against Sunnis, Jews and Westerners and has influence on the educational system. It is natural that he should try to advertise the ideological Shiite values that are close to Tehran.”

A report in Al-Monitor also stressed how the Shia Popular Mobilization Units have already made inroads on Iraqi university campuses, where it is feared by some that they could seek to export the Iranian educational model to Iraq. One example of this was provided by Iranian dissident Mohsen Behzad Karimi, who stated that the Shia-led government is indoctrinating students to support martyrdom.

Iraq expert Gilgamesh Nabeel is more concerned about the plight of minorities under the Iraqi Government’s Educational system: “There is a concentration on Shiite Islamic figures. Minorities are marginalized in Iraq’s curriculum. This left students with total ignorance of their fellow citizens.

There is nothing on the Kurds in Iraq’s Central Government curricula. There is no single trace for the history of Christianity in Iraq. Nothing can be read on Yazidis and Mandeans. There is a concentration on the Islamic era in a way marginalizing even the ancient history of Mesopotamia to just a few chapters in the first intermediate grade. Besides, the Islamic look on non-Muslims might create a gap between Muslims and non-Muslims.”

In contrast, areas under the Kurdistan Regional Government teach children to be tolerant and to respect human rights as well as minority communities. As Kurdistan’s Prime Minister Nichervan Barzani proclaimed, “The KRG has been continually working, so that the education sector will have a modern and sophisticated system that is aligned with contemporary international standards, principles and values.” Kurdistan’s Minister of Education Pshtiwan Sadiq added: “Children in the Kurdistan Region are all taught in their mother tongue, depending on their heritage and location, which is a rare phenomenon.” Every year in the Kurdish educational system, they print materials in Armenian, Arabic, Turkamani, Kurdish and also for the Yezidis.

In addition, the KRG coordinated with the Education Ministry in order to avoid extremists having influence in the educational sector. 18 Islamic extremist books are banned in Kurdistan and some versions of the Koran that teach extremism were replaced with peaceful versions of the Quran in the Kurdish school system.

Even though the Kurdistan region has less money to invest in education than the Iraqi Central Government does due to the economic crisis, thanks to the KRG’s efforts, the illiteracy rate in Iraqi Kurdistan has shrunk between the years 2004 to 2017, down from 34 percent to 15 percent. At the same time, the number of students have risen from 534,962 students to a staggering 1,738,521 students. The number of teachers rose from 21, 389 to 136,302. And, the number of schools also increased from 1,320 to 6,789 schools. There are also 278 international schools are in Kurdistan. However, generally, the education sector is something public. It is totally free. To the contrary, ISIS charged students a fortune just to go to elementary school.

According to a UNICEF study, while the Iraqi government has more money to invest in education, the Kurdish educational system is better developed. This is largely due to the efforts of Kurdish Prime Minister Nichervan Barzani, who considers having a top quality education to be his main priority for a healthy education system means a developed society and community. In other words, as the educational system has worsened in Iraq in recent years due to the rise of Islamic extremism, the educational system in Iraqi Kurdistan has vastly improved since the Kurds gained autonomy. In addition, Kurdistan’s Prime Minister has financed giving a rehabilitation education to ISIS children in prison, where they will be able to catch up on their educational gap in special schools.