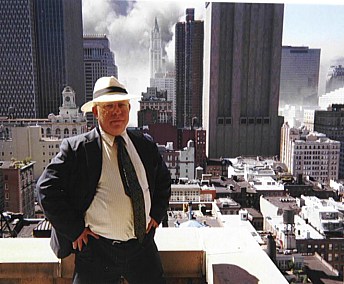 Terror at the Twin Towers caught this reporter in Lower Manhattan, preparing to give a seminar on how the PLO, the seemingly legitimate peace partner with Israel, had incorporated Islamic terrorist organizations and Islamic philosophy within the PLO’s Palestinian Authority, in its school books, media, maps, and evolving legal system. The specific topics to be addressed that day were: The lecture on the subject of the PA’s absorption of Islamic extremism scheduled for the morning of September 11th, in a law office on the 24th floor at 401 Broadway in Lower Manhattan. The first e-mail received that morning: which visual aids would be required for the discussion?. Well, The most horrific visual aid appeared outside the window outside facing east: The towering inferno on top of the Twin Tower closest to us, while WINS News broadcast the news that the PFLP faction of the PLO immediately took responsibility for causing the towering inferno. WINS reported that PFLP story for the next two days

Quickly grabbing a camera, the lens caught pictures of the WTC on fire, and then its sudden implosion. While taking the pictures, this reporter called the news line of The Voice of Israel radio station and reported a 10 minute live report, in real time, of the collapse of the twin towers as I witnessed it. Throughout the next 12 hours, this reporter contacted security sources in Israel to hear their perspective of what had transpired.

Their feedback: Look beyond Bin Laden to determine who was responsible for this horrendous crime. One source at the Israeli prime minister’s office noted that Israel was warning the US to examine the cooperation of several governments, NOT individuals, in the perpetration of the act: Afghanistan, Iraq and Iran, coordinated with Syria and the PLO. Meanwhile, veteran Jerusalem investigative reporter Dennis Eisenberg interviewed former advisor on terrorism to Israeli Prime Minister’s Office, Mr. Rafi Eitan, who said that that all signs pointed to Iraqi leader Saddam Hussein as the leading perpetrator of the act. Yet another Israeli intelligence expert remarked that the Israeli government had warned that US airlines may have been infiltrated by Moslem personnel who could have been activated to carry out such attacks. On the Palestinian side, conversations with Palestinian reporters made it quite clear that the demonstrations of joy that occurred immediately following the attacks in the cities under the Arafat’s control could not have been organized without the direct approval of Yassir Arafat. The Middle East Newsline reported that Arafat’s personnel were in the forefront of the Palestinian street demonstrations that lauded the Twin Tower attacks. It was the Palestinian Authority’s Ministry of Information that alerted and invited AP, Reuters, BBC, CNN and NBC to film the Palestinian demos of support for the terror attacks in the US. And since September 11th marked the eve of Arafat’s first diplomatic visit to Damascus in a generation, it seemed that the PLO chieftan wanted to let the Arab world know that his people supported terrorism against ALL targets in the US, civilian and military. Yet 12 hours after the attacks, AFTER demos of joy took place, Arafat condemned the attacks, and therefore benefited from both worlds with two dissonant messages: Arafat conveyed to the west that he condemned the action and simultaneously conveyed to his own people that they should express their support for such attacks. Message Arafat’s PBC Radio Newsreel Conveyed at the time of the Terror Attacks US

The Palestinian Authority conveyed a strong undercurrent of vitriolic anti-American rhetoric before, during and after the attacks on the World Trade Center and the Pentagon. Only two weeks before, the US government had ordered its delegation to walk out on the UN international forum on human rights in Durban, South Africa after the Palestinian delegation had engineered a series of tendentious anti-Israel events.

“If American does not restrict Israel, then there will be a regional, even a global calamity. If the United States does not stop Israel’s aggression, then it, too (the US) will suffer a great disaster.”

On the after the bombings, on September 12th, Voice of Palestine Radio opened its morning drive-time news show thus: (Nizar al-Ghul announcing):
“Tanks in Jenin, and the Resistance Continues
Tanks in Nablus and the Resistance Continues,
And meanwhile, there is Hell in New York”.
On September 14, Sahir Habash, a senior member of the Fatah leadership, said: “We have to stand firm in these difficult days until the Americans understand that most of the catastrophes that befell them or are likely to befall them are due to their own one-sided-ness and their participation in aggression against the Palestinian people.”

Less than one month after the 9/11 attacks, during the week of October 5th – October 11), the Voice of Palestine has relayed daily reports which claimed Israeli Mossad involvement in the World Trade Center attacks, with the complicity of American citizens, with no mention of any Arab involvement.