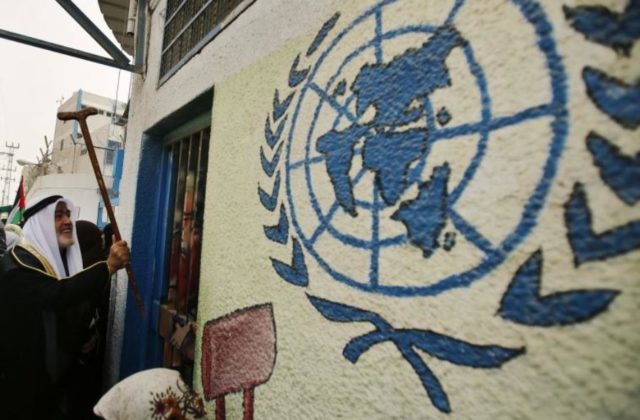 Officials from the Simon Wiesenthal Center and Middle East Forum presented a new report to Representative Doug Lamborn (R-CO) on Tuesday blasting UNRWA for allegedly including calls for incitement and violence against Israelis in its curriculum.  The researchers, Dr. Arnon Groiss and Jonathan Halevi, will also be meeting with the staff of United Nations Secretary General Antonio Guterres in New York on Wednesday.

The United Nations Relief and Works Agency works solely with approximately 5 million Palestinian refugees in the West Bank, Gaza, Jordan, and Lebanon. The United States currently provides UNRWA with approximately 300 million dollars annually. Despite criticism from the Trump administration, U.S. Ambassador Nikki Haley confirmed that Washington will continue to provide the organization with aid next year.

“UNRWA needs to be held accountable for allowing these horrible teachings to exist in the Palestinian school books. They should know better than to let incitement to hatred and violence be taught to young kids,” Lamborn explained after meeting with the researchers.

According to the report, in Palestinian textbooks the label ‘Israel’ frequently does not appear on a map of the Middle East. Instead, the name ‘Palestine’ covers the pre-1967 territories on the map.

Groiss writes that UNRWA teachings accuse Jews of having “genocidal” intentions towards Palestinians. A 7th grade lesson states, “The arrival of the Jewish throngs to Palestine continued until 1948 and their goal was taking over the Palestinian lands and then replacing the original inhabitants after their expulsion or extermination.”

The UNRWA textbook also includes poetry that encourages violence against Israelis, the authors note citing lines calling for “sacrificing my blood” for the Al-Aqsa mosque. Furthermore, the report expressed concern about the teaching of the Palestinian right of return to homes in pre-1967 Israel.

In July, Israeli Prime Minister Benjamin Netanyahu told Haley that UNRWA should be dismantled and accused the agency of “perpetuating the Palestinians refugee problem” instead of solving it.