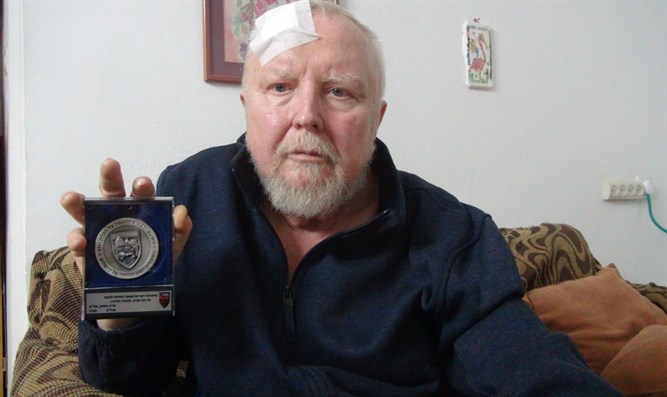 David Ramati, injured in Friday’s terror attack, spoke of the moments before the terrorist rammed into him near Efrat in Gush Etzion.

“When I really looked at him, he actually started smiling, big smile, and I could see in his eyes he was thinking, ‘This Jew’s gonna die.’ That’s when I started to understand that I’ve got no more than four seconds to make a decision,” Ramati said.

“I had a gun in my holster, I could’ve taken it out, it might’ve even hit him or his car, but I’d have ended up underneath the wheels, a Ramati hamburger. The other option is to jump over the protective fence…and get out of his way, which I did. So I started to jump – and that’s why most of my injuries are from the right shoulder down.”

“I decided that I’d have to check it out, I went to learn, and there was a question of how Jewish was I, and on which side,” Ramati recounted. “So Rabbi Moshe Feinstein made a psak (ruling of Jewish law) said, ‘Start fresh. You’re a convert. Start fresh. That way at least you’ll know you’re kosher by every possible way of looking at it.’ And so I did that, and my wife and I came to Israel within two months of finishing all the learning.”

“I served 25 years in the Israeli army and came out as a captain… I consider it a very great honor.

“I don’t have enough money to pay the Israeli and the Jewish people back for the wonderful experience.”