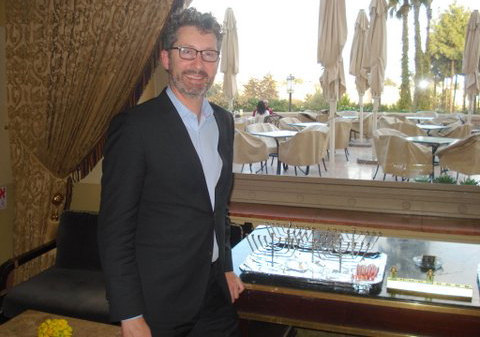 J-Wire’s Israel correspondent Michael Kuttner reports on a conversation he had with Chris Cannan, Australia’s Ambassador to Israel after his first six months in the post.

The venue could not have been more appropriate. Sitting in the lobby of the King David Hotel in Jerusalem with a view overlooking the Old City we discussed a variety of topics including of course the burning topic of the day, namely Israel’s Capital. Following in the footsteps of Dave Sharma, the most popular Australian diplomat ever stationed in Israel was always going to be a hard act to follow. However given his easy laid back manner and eagerness to learn Hebrew, Chris is well on the way to emulating his predecessor.

It’s not easy to be a diplomat in a country like Israel where every word and opinion is scrutinized with a microscope. If one represents a country which consistently displays a hostile attitude towards the Jewish State it is that much harder. Fortunately Australia does not fall into that category as relationships between both countries are close and warm even if they do not necessarily see eye to eye on every subject.

JW: What were your thoughts upon being appointed Ambassador to Israel?

CC: Thrilled. It was my first preference. I looked on it as an exciting challenge in a very stimulating part of the world. There are so many things to be achieved in many fields. The centenary of the Anzac liberation of Beersheba presented me with a unique opportunity and was something I was very keen to be involved with. I see it as a wonderful event to build even more awareness about Australia’s contribution to the establishment of Israel. Of course there also was Dr. Evatt’s positive role at the UN in 1947/48.

JW: Did you have any previous exposure to the Australian Jewish Community and its support of Israel?

CC: I really only had a peripheral awareness. However between being appointed and leaving for Israel I made sure to meet leaders of the Jewish Community in various States and soon realized the enormous contributions made by Australian Jews to Israel as well of course to Australia. Learning about the Shoah and then visiting Yad Vashem has been a haunting experience and makes one realize how this has impacted Jews worldwide. Also, Dave Sharma was of enormous help in bringing me up to speed with many aspects.

JW: What has surprised you or contradicted previously held perceptions since you have arrived?

CC: There really haven’t been too many surprises. Of course Israel is perceived as always being in some sort of conflict but when you live here you quickly realize that life is somewhat different. I knew about Israel’s hi-tech expertise but when you see it up close you discover that it is far more advanced. People are direct but so are Australians perhaps with a little more British reserve. I love the informality here and the laid back lifestyle. (By this time Chris had discarded his tie with much obvious relief). The other thing which stands out is the robust nature of Israel’s democracy with plenty of varying opinions openly expressed and easy access to politicians and decision makers.

JW: Given that the Balfour Declaration, San Remo and the League of Nations all guaranteed Jewish settlement up to (and originally beyond) the Jordan River why are we continually accused of illegally occupying and settling that territory?

CC: Australia has always been a strong supporter of Israel and it is not our position to lecture both sides. We believe in two States for two people living in peace side by side.

JW: Do you think given current circumstances this is a realistic possibility?

CC: We hope so. Jerusalem’s status needs to be resolved by mutual agreement.

JW: Hamas, a declared terror group, is joining together with the PA. What is Australia’s position?

CC: The military wing of Hamas is a terrorist designated group. We are monitoring the situation of the political wing closely.

JW: But isn’t this just like saying that the SS was the military wing and the Nazi Party was the political wing when in actual fact they were both part of the same organization?

JW: Australia is a generous donor to UNRWA. Julie Bishop prior to the last elections was going to set up a Parliamentary committee to investigate how the donor aid was being used and what sort of oversight was being used. In view of the fact that UNRWA schools have been taken over by Hamas and the textbooks used teach incitement and war, will Australia be investigating and re-evaluating its aid to UNRWA?

CC: We have been assured by UNRWA that a framework is in place to assure that it retains neutrality. We are satisfied that the aid we provide is producing positive results.

JW: But why are there still refugees in squalid camps after all these years? The 800,000 Jews who were made refugees from Arab countries are now productive citizens of Israel. What about the textbooks in UNRWA schools?

CC: UNRWA and the UNHCR have different aims. As far as the textbooks are concerned we understand that independent assessments have been made and that there is no problem.

JW: Do you mind if I send you proof that in actual fact the books do indeed present a problem?

JW: Australia has been elected for a 2 year term to the UN Human Rights Council as from 1 January 2018. Will Australia speak out against the bashing of Israel by the immoral majority on this body?

CC: We will vote for what is fair and balanced.

JW: Does this mean not abstaining when Israel is unfairly accused?

CC: Australia will look at each case on its merits.

JW: Trade and commercial ties are stronger than ever. Where do you see further developments in the future?

CC: There are indeed lots of exciting things happening. The Victorian State Government has just initiated some major agreements. The Federal Government’s initiative with the “landing pad” in Tel Aviv is providing wonderful opportunities with 38 Australian start ups being exposed to Israel’s expertise in various fields. Currently there are 16 Israeli companies listed on the Australian stock exchange with more to come. These cover areas such as health, energy, biotech and agriculture. State Governments are also becoming active and a very strong bilateral relationship is becoming even closer. A double taxation agreement is in the pipeline and private initiatives between universities and research institutions are on the increase. The defense and security relationship between both countries is strengthening and it has been decided to hold discussions on these topics every 2 years. There is close collaboration between defense industries and of course cyber security where a leaders’ dialogue is being set up. The possibilities are exciting and I am thrilled to be part of it.

JW: What about tourism?

CC: This is booming and with a code sharing agreement signed between Qantas and El Al it should increase. Cathay Pacific is providing competition and this is good for tourists.

JW: Are direct flights on the horizon? Why do Israelis still need to obtain visas when visiting Australia? Visa free entry would surely boost tourism down under.

CC: Direct flights present all sorts of logistical and economic problems so this won’t be happening in a hurry. Visa free entry to Australia would be great but I don’t know when or if it is likely to happen.

JW: What about BDS?

CC: Australia is against boycotts of Israel and will not support it. As you can see our trade and commercial ties are going ahead in leaps and bounds.

JW: Thank you for spending the time to chat. Hopefully we can continue our discussions some other time.