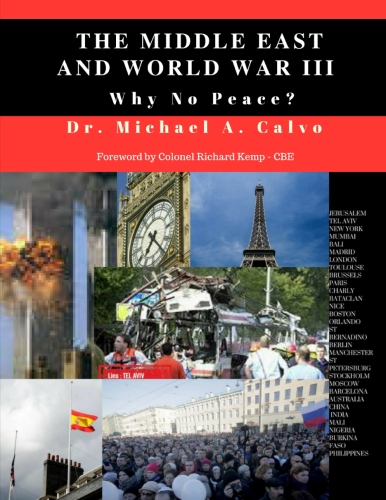 Launch of a new book​:​ THE MIDDLE EAST AND THE WORLD WAR III, on Amazon and World Wide.   Authored by MICHAEL A. CALVO and Foreword By Colonel Richard Kemp.

The Middle East and World War III – Why No Peace?” is the first book that rigorously considers the critical question of why the Middle East seems unable to achieve peace. This book is the first multimedia book to document and expose the terrorist and anti-Israeli Palestinian system and pattern of behavior to eradicate the State of Israel and the Jews on their Land, after delegitimizing them in the West.

By multimedia, we mean that beyond reading, this book enables the readers to see and hear videos, which are on internet, on their smart phone after loading a free QR Code application. For a QR code explanation for the book THE MIDDLE EAST AND WORLD WAR III – Why No Peace, click here: https://youtu.be/bCyX3q4Se9o

​The author, an international lawyer, analyses why the Israeli-Palestinian/Arab/Muslim conflict has not been resolved in spite of the Oslo Agreements and many years of active involvement by the European Union, individual European states, the U.S., Russia and the United Nations. It analyses also the legal propaganda war against Israel covering many fields and how to answer. Are the territories of Judea Samaria (West Bank) occupied, disputed or liberated?  To whom do they legally belong? The Arabs who live there are they a “Palestinian people” or Arabs who came from different countries. Are the Jews the indigenous people?

Between 1978 and the Oslo Agreements in 1993, i.e. over a period of 25 years, 254 persons, Israelis and foreigners were murdered by Palestinian terrorists. Between the signing of the first Oslo Agreement in September 1993 and August 2000, i.e. in only seven years, the same number of persons were killed during the so-called Intifada. The number of victims thus multiplied by 3.6 during those seven years, and then by 30 times from 2000 to 2003. From 2000, through April 2017, over 1,263 persons were killed and 5,143 wounded. This number would be equivalent for a population like the United States to over 64,000 persons killed and 268,000 wounded. Is there a revealing chronology? What happened? Why? The Oslo process was intended to bring peace.

The Oslo agreements were signed to bring peace! But in reality they were a trap, a Trojan Horse, as admitted before his death by Faysal Al-Husseini, Palestinian Authority Minister for Jerusalem Affairs. You will discover that according to the Norwegians the Oslo Agreements are almost identical to the formula Arafat intended years beforehand. They were not the result of reciprocal concessions negotiated between the Israeli and the Palestinians. You will learn that the day of the signing of the Olso Agreement, Arafat stated that the Palestinian flag will fly over the walls of Jerusalem, the minarets of Jerusalem and the churches of Jerusalem. And in 1994, a week after the Gaza Jericho Agreement: “The Jihad will continue”.

The Palestinian leaders promoted murderous Jihad in their schools, on Palestinian television, newspapers and on the internet, in Mosque sermons of Imams appointed by the Palestinian Authority, with the Qur’an in hand. While the Jews are delegitimized, demonized and dehumanized, eternal reward is promised to the terrorists in paradise and financial assistance is granted to their families. Since the establishment of the Palestinian Authority in the 1990s, the families of Palestinian criminals are held in high esteem, letters of congratulation are sent to them by the Palestinian Authority, damages and salaries are paid to them. Streets, schools and colleges are dedicated to the memory of such so-called “martyrs”. These terrorists are elevated as heroes and role models. Palestinian policeman, armed individuals, adolescents and adults, sometimes a father or even a mother of young children, are ready to kill Jews by any means and even to blow themselves to pieces to that end. They were not born hating Jews; they were and are still being incited to hate and to kill Jews. And the Europeans and the Americans continue to finance the Palestinian Jihad against the Jews in their land. Why? If there is an international criminal responsibility, there is also a lack of prosecution.

You will read, see and hear President Mahmoud Abbas say that the terrorists “did what the Palestinian Authority ordered them to do” and witness Mohammad Dahlan confirm the role of his Palestinian Security Forces: “Forty percent of the Martyrs in this Intifada belonged to the Palestinian security forces… and that the “Palestinian Authority has hidden Hamas members against Israeli counter-actions”. You will read, see and hear how the suicide bombers are recruited and brainwashed.

Behind the Boycott, Disinvestment and Sanctions, the Apartheid Weeks and the delegitimization, demonization and dehumanization of Israeli Jews, there is a Jihadist religious conflict, a theological/metaphysical war. How to explain otherwise that the so-called peace process did not lead to peace but to war, and that 1.6 billion Muslims fight a country the size of New Jersey and 6 million Jews with the help of money from the European Union and European countries, the graveyard of a first 6 million Jews?

The author also analyses the rise of ISIS and the alliance of anti-Semites, anti-Jewish churches and questionable societies, radical leftists, Radical Green and Muslims worldwide leading BDS actions against Israel. Why are these actions financed primarily by the European Union and its member states, through European, Palestinian and Christian and Muslim NGOs? Is there a joint European/Palestinian/Arab/Muslim strategy?

The author brings us a wider perspective of the Middle East conflict. Palestinian leaders, the Muslim Brotherhood, most of the Muslim States, Saudi Arabia’s Wahhabis’, Iranian Mollahs and ISIS, share the same Jihadi ideology encapsulated in one sentence: “Allah is our goal, the prophet is our ideal, the Koran is our constitution, jihad is our way, and death for the sake of Allah is our aspiration”.

As stressed in the book, Jews in Israel and abroad are not their only enemies to be destroyed. This ideology justifies the killing of the Jews and all “infidels” whoever and wherever they are, Christians, and non-Muslims, Yazidis, Hinduists, Buddhists, non-believers, and in a general manner all those who do not believe in the religion of truth, i.e. Islam, and also those Muslims who compromise with the infidels, from the United States to China, from Europe to Africa, from the Atlantic to the Philippines. That means almost the entire World. The World is facing terror attacks that Israel has been enduring since the Oslo Agreement in 1993 (suicide bombing attacks, shootings, stabbings, car ramming) under the same cry battle of “Allahu Akbar” (G.d is Great).

It is thus clear why leading experts and Pope Francis have said that the world has already entered World War III. Whatever happens with ISIS, America, Europe, Israel, the Muslim states, Russia, India, China, and all other states will face World War III from within.

The Israeli-Arab conflict has been analyzed as a territorial conflict that could be resolved by transferring land. In reality, this conflict is a theological/metaphysical conflict of Muslims against the Jews and the non-Muslim world, with no solution in view. Is this in accordance with the Koran? What safe solutions can be proposed?

After reading the book “THE MIDDLE EAST AND WORLD WAR III – Why No Peace?” you will be able to answer many such questions by yourself.

For Colonel Richard KEMP – retired British Army officer who commanded British Forces in Afghanistan and headed the International Terrorism Intelligence Team in the UK Prime Minister’s office – who wrote the Foreword, the book “The Middle East and World War III – Why No Peace?” is “the first book that rigorously considers the critical question of why the Middle East seems unable to achieve peace. It should be read by all political leaders, academics, journalists, students and anyone who wants to understand why there is no peace and what may happen.”

This book is available on Amazon website, or click the following link available now on paperback and kindle format now: