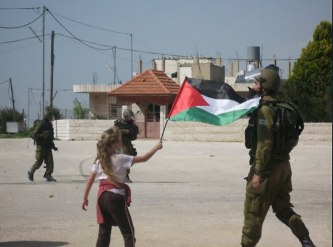 The two girls in the video who taunted and tried to provoke the IDF soldiers were Ahed Tamimi, 17, from the village of Nabi Saleh, and her cousin, Nur Tamimi, 21. Ahed Tamimi is the daughter of Bassem Tamimi, a prominent Palestinian figure (with the so-called “popular resistance”) in the village of Nabi Saleh. It was not the first time Ahed Tamimi was documented taunting and aggressively trying to provoke IDF soldiers. The Tamimi clan and their daughter Ahed have a long history of provocations during clashes with the Israeli security forces.Two years ago she was filmed biting a soldier who had come to detain her brother during one of the weekly riots in Nabi Saleh. In another instance she was filmed screaming at a member of the Israeli security forces in an attempt to make him lose his tempter. The home page of the Tamimi Press website, the Tamimi family news agency[1]. In November 2015 later Ahed Tamimi was again documented clashing with IDF soldiers during a riot where her brother Muhammad threw stones at the Israeli security forces. When a soldier tried to detain her brother, she and other women from the Tamimi clan attacked him. Thus another picture of Ahed Tamimi biting a soldier went viral. After the incident the family again met with Mahmoud Abbas. Promo for the (cancelled) speaking tour in the United States (the Fig Tree and Vineyards blog, December 18, 2016). [1] In the upper left-hand corner of the picture the letters ISM appear, which stand for the International Solidarity Movement. It is a network originating with far leftist activists in the United States and is incorporated into the campaign to delegitimize Israel. ISM activists took part in demonstrations and riots against Israel in Judea and Samaria (along with far leftist activists and anarchists around the globe). Among other locations, they also operated in Nabi Saleh, one of the villages that became a symbol of the so-called “popular resistance” (For further information see the ITIC December 12, 2010 bulletin, “The International Solidarity Movement (ISM) is a network founded by extreme American leftists and part of the campaign to delegitimize Israel,” http://www.terrorism-info.org.il/en/17984/ ↑