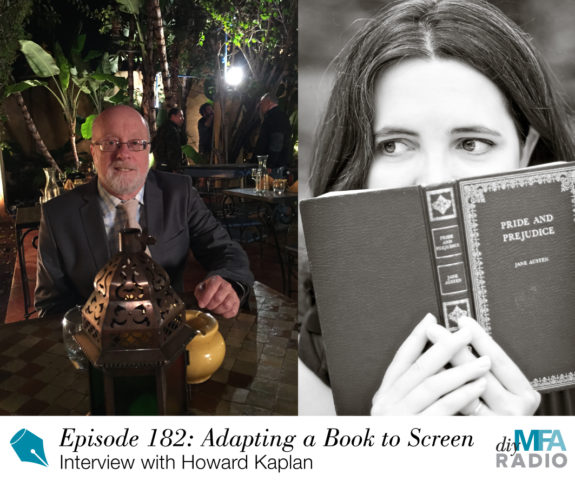 Today I am delighted to have author Howard Kaplan on the show!

Howard is a native of Los Angeles, but he has lived in Israel and traveled to numerous places across the world, including Lebanon, Syria, and Egypt. He also has had some incredible adventures in the former Soviet Union which, along with his time in Syria, inspired his bestselling thriller The Damascus Cover.

Published forty years ago to rave reviews, The Damascus Cover is finally coming to the big screen. The movie debuted in September 2017 at the Boston Film Festival, and is scheduled for release everywhere this spring.

Listen in as we talk about this bestseller, the art of film, and how to take a story from page to screen.

This episode is brought to you by our amazing word nerd fans and supporters on Patreon. If you’d like to help support this show, hop over to patreon.com/DIYMFA.

In this episode Howard and I discuss:

Plus, Howard’s #1 tip for writers.

Howard Kaplan, a native of Los Angeles, has lived in Israel and traveled extensively through Lebanon, Syria and Egypt.

At the age of 21, he was sent on a mission into the Soviet Union to smuggle a dissident’s manuscript on microfilm to London. His first trip was a success. On his second trip, he transferred a manuscript to the Dutch Ambassador inside his Moscow embassy. A week later, he was arrested in Khartiv in the Ukraine and interrogated for two days there and and two days in Moscow, before being expelled from the USSR. The KGB had picked him up for meeting dissidents and did not know about the manuscript transfers.

Howard holds a BA in Middle East History from UC Berkeley and an MA in the Philosophy of Education from UCLA. He is the author of four novels. The feature film adaptation of The Damascus Cover, which is Book 1 in his Jerusalem Spy Series, will be released in theaters worldwide in spring 2018. In a last ditch effort to revive his career, washed out agent Ari Ben-Sion accepts a mission he never would have 30 years ago, to smuggle a group of Jewish children out of the Damascus ghetto. Or so he thinks.

In Damascus, a beautiful American photographer, Kim, seems to be falling in love with Ari, but she is asking too many questions. His communication equipment disappears. His contact never shows up. The operation is only hours away and everything seems awry.Desperate to succeed, Ari might risk everything. Even his life.

Forty years ago, Howard Kaplan’s bestselling thriller, The Damascus Cover, debuted to rave reviews. On September 23, 2017, the film adaptation premiered at the Boston Film Festival as a major motion picture. An action-packed thriller, this film features an all-star cast, including Jonathan Rhys Meyers (The Tudors, Bend it Like Beckham), Olivia Thirlby (Just Before I Go, Between Us) and in one of his last performances, the late, great Sir John Hurt (The Elephant Man, television’s I Claudius).

After ten years of annually optioning the movie rights with director Daniel Berk, the film is finally seeing the light of day, and the story has never been timelier. “My books are generally about reconciliation between Israelis and Arabs/Palestinians,” Kaplan says, “and this film is very much a hard-hitting representation of the excesses of both sides.”

If you decide to check out the book before you see the movie or if you want to check out the writing book Howard mentioning in the interview, we hope you’ll do so via these Amazon affiliate links — The Damascus Cover and Writing to Sell —  where if you choose to purchase via the links DIY MFA gets a referral fee at no cost to you. As always, thank you for supporting DIY MFA!

If you liked this episode…

Head over to iTunes, Stitcher Radio or Google Play and subscribe so you’ll be first to know when new episodes are available.

Also, remember that sharing is caring so if you know anyone who might enjoy this podcast, please tell them about it or leave us a review so other listeners will want to check it out.

Until next week, keep writing and keep being awesome!