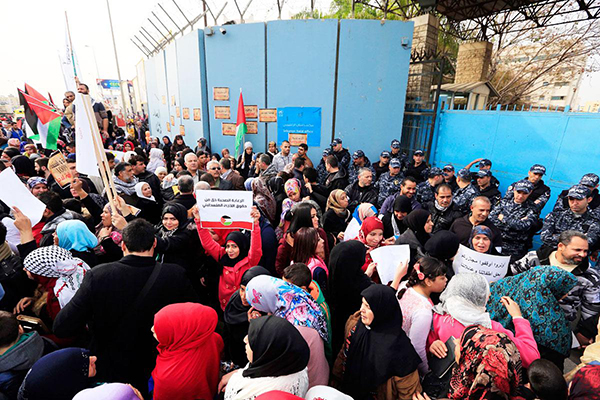 For some, the thought of President Trump’s decision to withhold $65 million in pledged aid to a United Nations agency that provides food, housing, and education to Palestinians in the West Bank and Gaza might seem unfair.

But a closer look at the organization, the United Nations Relief and Works Agency, or UNRWA, reveals a runaway agency that operates with little oversight. Since the agency was created in 1949, the US has committed billions of dollars in funding, and in 2017 it was UNRWA’s largest donor, contributing $364.3 million – or more than one-third of UNRWA’s $1 billion budget.

For decades, the US has stood by silently while observers have called to reform UNRWA. At issue is its mission and leadership. Since its inception, it has recognized the Palestinian “Right of Return,” which calls for Palestinian refugees from the 1948 Arab-Israeli War to return to cities and towns that are have long been under Israeli control. Initially, UNRWA recognized over 500,000 refugees but that number has jumped to over 5 million – as UNRWA now allows refugee status to be passed down from generation to generation. It also does not remove Palestinians who have moved and acquired citizenship in other countries.

But that’s just the tip of the problem. In Gaza, UNRWA has long been controlled by Hamas and Islamic Jihad operatives. For years, its worker’s union has been run by Hamas – and last year, its longtime union president and a former UNRWA school principal, Suhail al-Hindi, was named to the Hamas cabinet, along with Mohammed Al-Jamasi, UNRWA’s director of engineering. Other past UNRWA educators could form a list of “Who’s Who” in the Palestinian terrorism. They include: Hamas founder Sheik Ahmed Yassin, and Said Sayyam, a former Hamas Minister of Interior and Civil Affairs who taught for 23 years in UNRWA schools. Then there is the case of Awad al-Qiq, a former headmaster of an UNRWA school in Gaza who also led the Islamic Jihad engineering unit that built bombs and Qassam rockets.

In its school curriculum, UNRWA rejects the notion of co-existence and calls for an armed struggle against Israelis. UNRWA educators have served as role models for students to take up jihad against Israel, and at the end of the school year, thousands of Palestinian UNRWA students are trained each summer with live weapons at a Hamas Children’s War Camp in Gaza. Hamas terrorists have used UN facilities as rocket launching pads; twice last year, tunnels leading to Israel were discovered under UNRWA schools. Meanwhile, children have heeded their educators’ wishes: dozens have become suicide bombers.

Trump’s sober look at UNRWA’s policies should be applauded by US human rights activists and taxpayers. While other countries may boost their donations to the renegade agency, the US has declared that it is time to reform UNRWA. Within this intractable conflict, this is a step in the right direction to ensure the safety and mental health of young Palestinian students, and millions of Israelis.