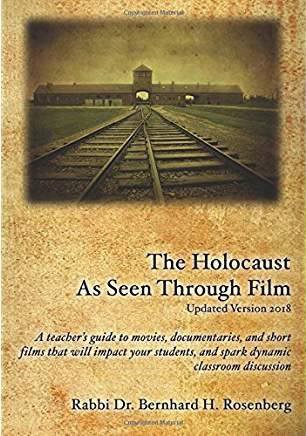 Kansas City native Rabbi Dr. Bernhard Rosenberg has devoted much of his life to making sure the horrors of the Holocaust will not be forgotten. The rabbi also wants to make Holocaust history easier to learn and to remember.

Case in point is Rabbi Rosenberg’s newest book now on sale. The lengthy title and front cover description provide a top-line overview: “The Holocaust As Seen Through Film: Updated Version 2018. A teacher’s guide to movies, documentaries and short films that will impact your students and spark dynamic classroom discussion.”

This revised and updated version of Rabbi Rosenberg’s 2014 book contains 24 additional pages of new material featuring reviews and information of films released since the initial publication. Rabbi Rosenberg said because “I knew the family” he brings attention to the updated edition containing a review of Big Sonia, the award-winning documentary filmed in Kansas City. Other films reviewed in the updated edition include “The Zookeeper’s Wife,” “Woman in Gold” and “Inglourious Bastards.” One’s first impulse is to consider Rabbi Rosenberg’s work an updated textbook for teaching purposes only. “The Holocaust as Seen Through Film” provides historical aspects of the atrocity with literature complying with new common core standards through the pictures, questions, discussions and research associated with each story. The book includes teaching techniques applicable to settings in schools, synagogues or the home. “For any teacher or rabbi lacking materials for a program, it’s all there,” Rabbi Rosenberg said of his book. “I give it to teachers and away they go.”

But the book has value beyond the education arena. Rabbi Rosenberg said films have the ability to provide insight to the Holocaust from different points of view including historic, dramatic and comedic.

“Watching a film is better than sitting through a lecture and easier than reading a book,” Rabbi Rosenberg said. “Some of the videos can hit you and when that happens you learn a lot.”

The breadth of Holocaust-related films reviewed in the book is beyond what can be discovered with a top-line internet search. Rabbi Rosenberg points out that when searching online for “Holocaust films,” search engines provide top-10 lists or titles of specific films and documentaries. His book provides a thorough, hands-on summary of primarily feature-length Holocaust-themed films produced for the theater and television. The book also addresses the respective influence of those films.

“This book is of value to everyone, not just Jewish people,” Rabbi Rosenberg said. “It’s being used in non-Jewish school for non-Jewish teachers for non-Jewish students.”
The book is available through Amazon and on Kindle.