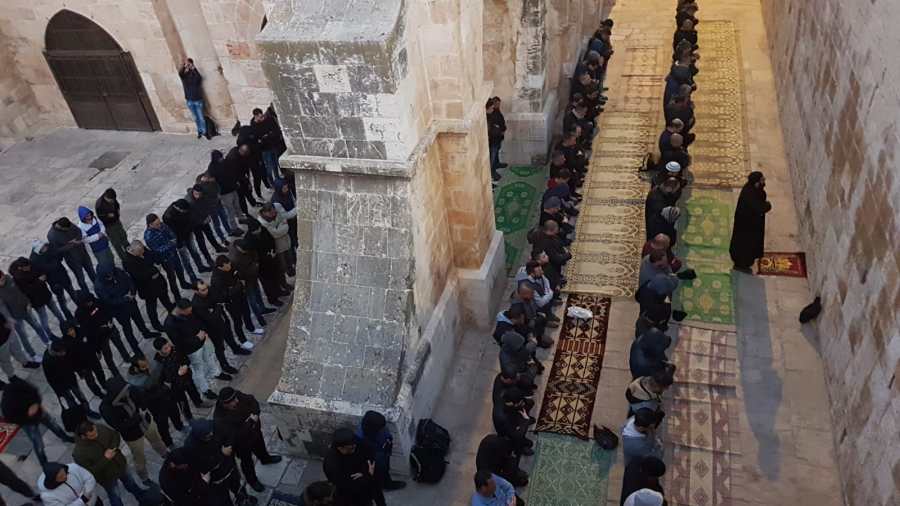 The Gate of Mercy (Shaar Ha’Rachamim) compound is the fifth mosque that the Muslims have created on the Temple Mount. After 1967, there was only one functioning mosque there.

The Muslims are not satisfied with this, and they have been eroding the status quo over the past three decades in many ways. There is no basis for their constant protests against Israel for violating the status quo on the Temple Mount.

The Waqf and the Muslims are turning the tables and rewriting history, which they are well aware of, when they describe Israel’s attempt to close the Gate of Mercy as a breach of the status quo on the Temple Mount.

Israel closed the compound in 2005 because a Hamas-related organization was operating at the site. The closure of the compound in 2005 – first with a military order and then with a court order – was periodically extended until several months ago. However, current Muslim activities in the compound are not only an attempt to retake possession of the compound, which they held in the past (just as they held the entire Temple Mount), but they are also attempting to take a very significant step further – to establish at the compound a fifth mosque on the Temple Mount. This effort demonstrates a process that has been going on for over 30 years to increase the Muslim prayer areas on the Temple Mount and to erode the fragile status quo established at the holy sites.

Here are the facts:

The first and second mosques – After the Six-Day War, only one mosque operated on the Temple Mount – the Al-Aqsa Mosque, where Muslims have always prayed. During the 1970s, in a gradual process, they also used the Dome of the Rock building, which was not originally a mosque, as a site for regular prayers. They now hold regular Friday prayers there, primarily for Muslim women.

Al Aqsa Mosque on the left, Dome of the Rock on the right (Ottoman Archives, circa 1917, Lenny Ben-David collection)

The third mosque – In 1996, the Muslims also converted Solomon’s Stables, in the southwestern corner of the Temple Mount, into an underground mosque. There had not been a mosque in Solomon’s Stables previously, and it had served as a storage area for Waqf equipment and as a kind of site of antiquities, occasionally attracting tourists and researchers under Waqf supervision. The Muslims carried out the renovation work at Solomon’s Stables, converting them into the al-Marwani Mosque, causing serious damage to antiquities on the Temple Mount.

The fourth mosque – A short while after the construction of the mosque in Solomon’s Stables, the Muslims converted parts of ancient al-Aqsa, under the upper al-Aqsa Mosque, into a mosque.

The fifth additional mosque – The seizure of the Gate of Mercy by the Muslims is characterized by the same modus operandi as was employed at Solomon’s Stables. They began holding prayer services at the site, spread carpets, and announced the appointment of an imam for the mosque of the Gates of Mercy.

Taking over more areas for prayer – Over the years, the Muslims have paved extensive areas on the Temple Mount that have also been used for prayer services, especially on Muslim festivals and on Ramadan.

However, these are not the only changes that the Muslims have made to their benefit in the status quo on the Temple Mount over the years. Here are several more, prominent examples:

The only change to the status quo that favors the Jewish side relates to the possibility of allowing Jews to visit the Temple Mount. Until five years ago, the police severely limited the number of Jews entering the Temple Mount at one time. Under the “watch” of Interior Security Minister Gilad Erdan and former Police Commissioner Yoram Halevi, this policy changed, when it was decided that the status quo permits freer access for Jews to the Temple Mount (as opposed to the right to pray there, which is forbidden). In 2018, more than 30,000 Jews visited the Temple Mount, as compared to just a few thousand until 2013. Most of the Jews visiting the Temple Mount follow police instructions and do not attempt to pray there. Demonstrative and public efforts to pray on the Temple Mount are almost always prevented. Silent prayers or prayers whispered in a way that is unseen and not demonstrative are not stopped.

So, the common Muslim protest against Israel’s violation of the status quo is completely baseless. In fact, the opposite is true. It has been the Muslim side that has been violating the status quo over the years on the Temple Mount. Israel has shown helplessness and weakness in its way of dealing with the constant erosion by the Muslims of the status quo on the Temple Mount. The Gate of Mercy incident is another test of Israel’s ability to stand against this ongoing process.