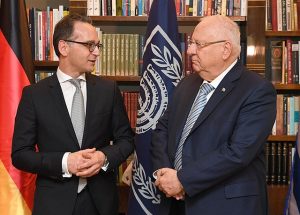 EXECUTIVE SUMMARY: The German government’s official policy is that it makes efforts to fight antisemitism and is friendly toward Israel. At the same time, it actively promotes antisemitism and anti-Israelism. It allows massive migration of antisemites from Muslim countries, supports discriminatory anti-Israel motions at the UN General Assembly, generously finances the antisemitism-supporting UNRWA, and congratulates the genocide-promoting regime of Iran.

The German government’s official policy is that it makes efforts to fight antisemitism. One example is its provision of security services for Jewish institutions. Another is the appointment of a national antisemitism commissioner. It is also official policy that Berlin is friendly toward Israel. One illustration of this is that German ministers visit Israel from time to time to discuss possibilities for collaboration.

Alongside these measures, German policy also promotes antisemitism and anti-Israelism, both directly and indirectly.

Since 2015, the German government has welcomed, without any selection, many immigrants from Muslim countries. Hundreds of thousands of these immigrants are antisemites. A study in Bavaria found that more than 50% of Iraqi, Syrian, and Afghan immigrants agreed with the statement “Jews have too much influence in the world.” Among Germans this figure is between 15% and 25%. One might argue that a nation whose grandparents’ generation murdered 6 million Jews should not open its doors to an influx of new antisemites. Doing so cannot be reasonably justified through humanitarian arguments.

A major example of Germany’s ongoing participation in incitement against Israel is its voting record at the UN General Assembly. The German daily, Bild, reported that in recent years the General Assembly has accepted more than 500 resolutions against Israel – and not a single one against the Palestinian terror group, Hamas.

Bild gave examples from the period 2014-2017. In 2014, of all resolutions directed against a specific country, 87% were against Israel.  In 2016, the number was 77%. In 2017, 78%. At the UN Human Rights Council, more than half the resolutions were against Israel. Bild pointed out that Germany regularly sides with Israel’s enemies. In November 2018, of 21 General Assembly resolutions against Israel, 16 were supported by Germany and on four it abstained.

In the previous government, the leader of the socialist party, Foreign Minister Sigmar Gabriel, was a frequent anti-Israel inciter. Gabriel accused Israel of apartheid and did not apologize for months. While speaking in Tel Aviv in January 2018, he said he was a friend to Israel, adding that his country had a special commitment to Israel’s security. These assertions ring hollow, as Gabriel was responsible for a huge number of German votes against Israel in the UN that undermined its security.

In the current government, Foreign Minister Heiko Maas, also a socialist, has often said that Auschwitz inspired him to go into politics. Yet his ministry continues to support the demonization of Israel at the UN. The 16 German votes against Israel in November 2018 took place during Maas’s time in office.

Under Maas there has also been increased German support for UNRWA after the US pull-out. Rabbi Abraham Cooper, Associate Dean of the Simon Wiesenthal Center, summarized the issue and Maas’s role in it thus:

Following the US’s move to pull support from the group that brainwashes kids on the many “virtues” of martyrdom, German Secretary of State Heiko Maas announced a “substantial” increase in funds from his country to UNRWA. With 100 million euros in aid money, Germany remains one of UNRWA’s largest benefactors. Yes, support for the Palestinians’ quest for a better future is right and important. But Hamas and Palestinian Authority curricula funded by UNRWA amount to textbook child abuse. Nobody I met with in Berlin could assure me that the German money did not directly benefit Hamas.

Furthermore, in February, under Maas’s leadership, the German Foreign Ministry sent representatives to the Islamic Republic of Iran’s embassy in Berlin on the occasion of the celebration of the 40th anniversary of the Islamic Revolution. This was despite the fact that Iran frequently calls for the destruction of Israel.

The German celebration of the Islamic Revolution did not stop there. German President Frank-Walter Steinmeier, also a socialist, “congratulated the Iranian Government cordially on the occasion of the 40th anniversary of the revolution, also in the name of my fellow country citizens.” The daily Tagesspiegel wondered whether one had to remind Steinmeier that Iran is a sponsor of international terrorism, threatens Israel with destruction, denies the Holocaust, oppresses women, executes homosexuals, and punishes religious conversions with death. It concluded: “The moral compass that should guide the words of a President of the German republic has in this case greatly failed.” The German congratulation of the Iranian government is even more striking in view of the fact that when Donald Trump was elected US president in November 2016, Steinmeier, then foreign minister, made a point of stating that he was not offering him congratulations.

The liberal party (FDP), which is in opposition, recently asked the German government to change its policies at the UN. One of the party’s parliamentarians, Frank Muller-Rosentritt, pointed out that in one year, 21 resolutions against Israel were decided while there was only one against Syria. He said this “disproportion shows that the enemies of Israel instrumentalize the UN to delegitimize the Jewish State.”

Direct and indirect assistance to antisemites and anti-Israelis takes place not only at the national level, but also at the level of the federal states. Establishing statistics on antisemitic crimes is their responsibility. The national antisemitism commissioner, Felix Klein, has said that published statistics on this subject are misleading and that he intends to tackle this distortion. The many crimes against Jews in which the perpetrators cannot be identified are registered as having been caused by extreme right-wingers, which is often untrue.

Klein has stressed that the necessary change can be achieved only by convincing the interior ministers of the federal states to modify the way these statistics are compiled. According to Klein, physical attacks on Jews by Muslims are far more numerous than what is recorded. Jewish representatives, too, have often drawn attention to the many antisemitic incidents caused by Muslims, which are poorly reflected in the statistics. If the states do not accurately report among whom to search for perpetrators, they are in effect assisting the antisemites.

The approval of schoolbooks is another responsibility of federal state governments. A recent study by two German professors, Samuel Salzborn and Alexander Kurth, investigated antisemitism in German schools. Partly on the basis of an earlier study, they found that with respect to textbooks, Israel is often presented as entirely negative and Palestinians as entirely positive in the fields of geography, history, and politics. They note that Israel is mentioned solely in the context of the conflict with the Palestinians. Israel’s military actions and reactions to Palestinian terrorism are often presented as just as problematic as the terrorism itself.

These are but a few examples among many more. In view of Germany’s horrible past and problematic present, an in-depth study should be conducted on how German national and state governments directly and indirectly promote antisemitism and anti-Israelism.

This article is an extended version of an article which was published in Algemeiner on February 19, 2019.

Dr. Manfred Gerstenfeld­­­­­­­­­­­­­­­­­­­­ is a Senior Research Associate at the BESA Center and a former chairman of the Steering Committee of the Jerusalem Center for Public Affairs. He specializes in Israeli–Western European relations, anti-Semitism, and anti-Zionism, and is the author of The War of a Million Cuts.