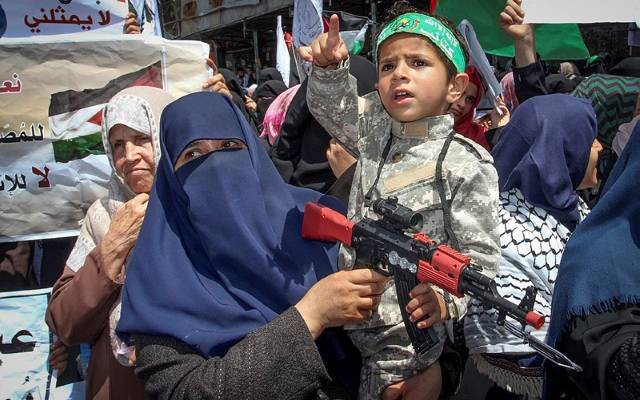 JERUSALEM – Full disclosure: Neither of us has seen an advance copy of President Trump’s Middle East “Deal of the Century.” But we can be certain that for this peace plan – or any other plan – to succeed it must tackle not only the pocketbooks, but the minds and hearts of the signatories.

We are old enough to remember the hope – even euphoria – that greeted the signing of the Oslo Accords at the White House in 1993. And while historians and pundits will forever argue who “lost Oslo,” we believe peace was never attainable because no serious demand came from donor nations to demand changes in the Palestinian narrative about their Jewish neighbors.

Thousands of UNRWA students spent last summer learning how to shoot with live ammunition. Many now camp out near Gaza’s border as Hamas, which dominates UNRWA media, continues its violent assaults on Israel’s border.

The peace plan must include a change in the status of five million descendants of Arab refugees from the 1948 war, which the Arab world waged on Israel hours after its funding. Seventy years on, they live in 59 “temporary” UNRWA refugee camps with the false hope of a “return” to villages that haven’t existed for nearly three-quarters of a century. Not another people on Earth has been able to transfer its refugee status from generation to generation and demand the “right of return.”

Palestinians aren’t blind to a thriving state built on Jewish blood, sweat, and tears. During a meeting a few years ago with Palestinian community leaders in the Hebron area, one former Jordanian official lamented, “we have wasted another generation.” Those among the Palestinian population who seek normalcy and prosperity will (secretly) welcome any Trump plan that will deliver a better future for their children and grandchildren.

But if the PA – beholden to the old Palestinian Liberation Organization (PLO) – continues in power, there will be no peace, unless and until the PA cancels its “pay to slay” Jews policy, which provides financial reward to the families of terrorists; unless and until the new PA war curriculum in all PA and UNRWA schools is expunged; and unless and until these schools teach the next generation that real peace and mutual respect are laudable and achievable goals.

Rabbi Abraham Cooper is the Associate Dean, Director Global Social Action Agenda at the Simon Wiesenthal Center. David Bedein is Director of the Israel Resource News Agency at the Center for Near East Policy Research in Jerusalem.