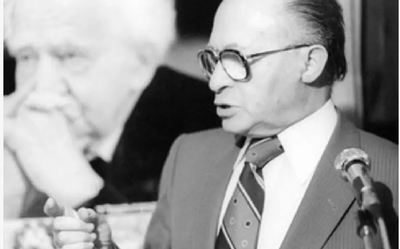 The Israeli press is focused these days on the political and legal travails of Benjamin Netanyahu, the Likud leader who has been prime minister since 2009 and has now been indicted in bribery, fraud, and influence-peddling scandals. No such charges ever attached to Menachem Begin, the scrupulously ethical politician who became Israel’s first Likud prime minister in 1977. During a recent visit to the Israeli capital, I spent a few hours reliving the career of the country’s sixth prime minister at the Menachem Begin Heritage Center, a museum and archive akin to a US presidential library.

I can’t say that my visit provided me with any blazing insight into current Israeli politics. But one exhibit got me thinking about US politics, and about the culture of contempt that pervades American society.

The display told the story of Israel’s 1981 parliamentary election, in which Begin and Likud were facing a powerful challenge from Shimon Peres and the opposition Labor party. Polls showed Labor in the lead, and it was widely expected that Begin’s first term as premier would be his last. But two days before the election, at a vast Labor gathering in Tel Aviv, the entertainer Dudu Topaz took the stage to rally the crowd. Amid cheers and laughter, he mocked Begin’s supporters as trashy lowlifes, using a racial slur — “chakh-chakhim” — for the darker-skinned Jews from North Africa and the Arab lands that were the core of Likud’s base.

The following night, Begin addressed a Likud rally at the same location. He recounted Topaz’s bigoted put-down — deliberately mispronouncing “chakh-chakhim,” as if to emphasize how distasteful and alien he found such language. Then he told his supporters about two fighters in the pre-statehood Jewish insurgency, who committed suicide in their prison cell rather than be hanged by the British. One, Meir Feinstein, was of Polish descent; the other, Moshe Barzani, was Iraqi. They died in each other’s embrace, a grenade lodged between them. As Begin told the story, he emphasized, with shuddering emotion, that the two young men had laid down their lives not as a European and an Iraqi, but as “Jews! Brothers! Fighters!”

It was a moment of extraordinary power, and it changed the trajectory of the election.

“At that moment we already knew: Labor was defeated and the battle was over,” the leftist Israeli journalist Gideon Levy wrote years later. Likud won a plurality of seats, and Begin continued as prime minister.

I don’t know what goes through the minds of Israelis when they view that exhibit. What went through my mind as I watched the old film footage were echoes from modern American politics: Hillary Clinton lumping Republican voters into a “basket of deplorables.” Mitt Romney writing off nearly half the electorate as the “47 percent . . . who believe that they are victims.” Barack Obama, describing small-town conservatives in 2008 as “bitter” people who “cling to guns or religion or antipathy to people who aren’t like them.” Donald Trump smearing journalists as “enemies of the people” and Republican Never-Trumpers as “human scum.”

Of course invective has always been part of politics. Hard-fought presidential campaigns are not a 21st-century innovation. In 1800, one leading supporter of John Adams — the president of Yale, no less — warned that if Thomas Jefferson were elected, “we would see our wives and daughters the victims of legal prostitution.” Andrew Jackson’s foes didn’t just attack him in 1828, they slandered his wife Rachel in terms so poisonous that Jackson blamed them for her untimely death. Lyndon Johnson approved a notorious TV commercial suggesting his Republican challenger, Barry Goldwater, was prepared to kill children in a nuclear war.

What feels different today is how contemptuous political enmity has grown. Candidates, activists, and pundits are no longer content to ascribe bad motives to their opponents or predict bad outcomes if they prevail. Increasingly they see those on the other side of the political divide not as fellow Americans with whom they differ, but as “deplorables” or “losers” whom they despise.

For most of American history, it was suicidal for candidates to sneer derisively at half the electorate. In 1884, a surrogate of James G. Blaine, the Republican presidential nominee, publicly libeled Democrats as the party of “rum, Romanism, and rebellion” — i.e., alcoholics, Catholics, and disloyal ex-Confederates. Newspapers trumpeted the insult in headlines the following day, enraging Irish Catholic voters and fatally wounding Blaine’s campaign. Rough-and-tumble politics was one thing, but to openly scorn a huge swath of the electorate was intolerable.

Those old norms are dead. Gallup reports that now even the most basic institutions of American life — religious organizations, the economic system, higher education, the scientific establishment — are seen by partisans “not as beneficial and necessary, but as part of an effort by the other side to gain advantage and to perpetuate its power.”

It is commonplace to decry the polarization of American society. But what makes it so dysfunctional isn’t that we have sharp disagreements. It’s the caustic contempt with which those disagreements are expressed —the determination not just to win political arguments, but to savor the tears of those who lose them.

More than at any time since the Civil War, America needs what Israel was fortunate enough to have in 1981: a respected leader to take a stand against a spreading culture of contempt. More than ever, voters need to say no to candidates who traffic in defamation and disdain. But we have pulled down the guardrails that used to keep American politics within broad bounds of decency and respect, and no one seems inclined to put them back up.