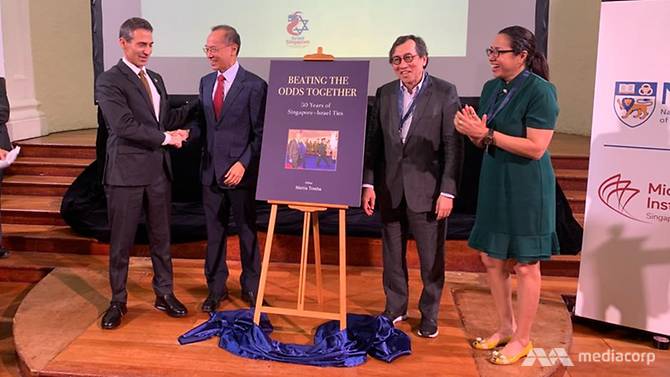 Singapore’s first batch of officer cadets had to wake up at 5.30am, begin training at 7.30am and end their day only at 1am.

When the cadets complained about the tough schedule, then-Minister for Defence and Security Goh Keng Swee told them during a visit to the training school to either strictly follow instructions, “otherwise you will do double”.

This anecdote is from the book Beating The Odds Together, which commemorates 50 years of Singapore-Israel ties.

The book details how Israel helped Singapore establish the SAF when other countries declined the latter’s calls for help. It also shows how that relationship has developed beyond security to fields such as business and technology.

The depth of Singapore’s relationship with Israel has rarely been publicised because of political sensitivities, wrote Emeritus Senior Minister Goh Chok Tong in his foreword in the book, highlighting Singapore’s neighbours’ position towards Israel.

“Today, we can be open in telling the story of the extraordinary contribution by our Israeli friends to our security when few thought that Singapore could survive on its own,” he said.

While the book celebrates 50 years of diplomatic ties between Singapore and Israel, the relationship between the two countries actually dates back slightly earlier to 1965, when Singapore separated from Malaysia.

The split happened amid a communist insurgency and armed confrontations in the region, prompting Singapore to make defence capability an “existential priority”, wrote the former Permanent Secretary (Defence) Peter Ho in one chapter of the book.

Dr Goh Keng Swee agreed to lead the effort to build an army from scratch and approached countries that had done the same.

While India and Egypt congratulated Singapore on its independence, they did not offer military aid. Then-Prime Minister Lee Kuan Yew subsequently gave the green light to approach Israel for help, Mr Ho wrote.

In October that year, a general of the Israel Defense Forces was dispatched to Singapore under conditions of “great secrecy”.

He travelled incognito around Singapore by taxi, studied the terrain and ground conditions, and together with a team developed The Brown Book, a master plan for the creation of the SAF.

“It covered strategy and doctrine,” wrote Mr Ho. “But at its core was the fundamental assessment that the only viable solution for Singapore was to build a citizen army of conscripts, trained and led by a small regular force.”

The Brown Book also proposed the setting up of an officer training school to produce professional leaders that could train future soldiers.

In November, a group of seven different Israeli advisors arrived in Singapore and eventually selected Pasir Laba as the site for the training school.

The Israeli advisors “insisted from the very start that the Singaporean officers were to learn from them so that they could take over as instructors as soon as possible”, wrote Mr Ho.

By the early 1970s, word started going around that Israeli training had been incorporated into the SAF syllabus, and that it was extremely tough and dangerous, with the use of live ammunition and the occasional serviceman injury or even death, said Mr Ho.

“Of course, this was all exaggeration and rumour-mongering in the hothouse of the early years of National Service,” Mr Ho added.

“But I suspect such rumours served a useful purpose, because it persuaded us in those days that our military training was to be taken very seriously.”

In Singapore, the Israeli team also conducted a course for recruits and platoon commanders, and Israel soon became a key source of defence equipment and technology.

“We will always be a student to Israel in military affairs. We should always be eager students,” said Mr Yeo at the book launch event on Monday.

“Our bilateral relationship now extends beyond defence to many other fields, and it has always been our fervent hope that Singapore can be a benefit to Israel to whom we owe a deep, eternal debt of gratitude.”

The 143-page book retails at major bookstores for S$37.