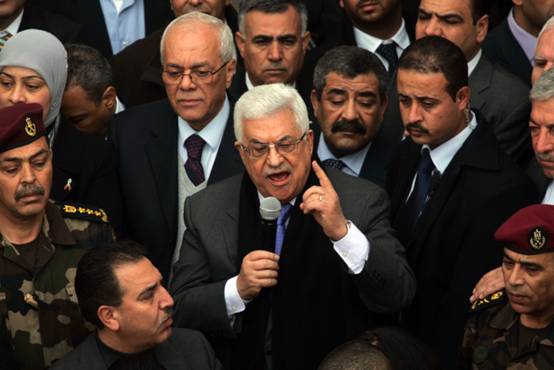 It comes as no surprise that Palestinian Authority President Mahmoud Abbas declared President Trump’s Middle East peace plan “dead on arrival” even before it was presented at the White House this month.

Indeed, the Palestinian Authority arrested the one Palestinian businessman who dared to attend the Trump administration’s international economic conference in Bahrain last year. His crime? Meeting with the heads of the World Bank, International Monetary Fund, AT&T, and U.S. Treasury Secretary Steve Mnuchin, Trump adviser and son-in-law Jared Kushner and other economic experts presenting ways to bootstrap the Palestinian economy into the 21st century.

So, it was inevitable that Abbas should choose the friendly confines of the U.N. Security Council to launch a diplomatic counterattack against the U.S. peace plan. Right on cue, on Saturday, Tunisia circulated a boilerplate anti-Israel resolution at the Security Council where Abbas is slated to speak today. That diplomatic move was accompanied by streets demonstrations and even a headline proclaiming that the Trump plan would establish an apartheid regime.

The draft resolution demands that any two-state solution forces Israel to return to its pre-1967 war lines. That border, in the center of the country, was only nine miles wide between Jordan and the Mediterranean Sea. Today, it would be indefensible — easy pickings for terrorists or Iranian missile strikes against population centers in the Jewish state’s heartland. Bottom line: No Israeli leader could or should agree to such a suicidal move. Abba Eban, Israel’s late foreign minister and founder of the Peace Now movement, labeled the pre-67 lines “Auschwitz borders.”

For good measure, the Tunisian draft resolution defined all Israeli “settlements,” including East Jerusalem, as illegal, occupied territories that must be “returned” to the Palestinians, with Jerusalem as their capital.

None of this should surprise anyone. The United Nations and its constitute parts, including the General Assembly, U.N. Human Rights Council and U.N. Relief and Works Agency (UNRWA), have cranked out endless anti-Israel resolutions and initiatives while giving Palestinian aggression a free pass for decades. At the Security Council, only U.S. vetoes have spared Israel draconian, one-sided condemnation.

Abbas’s goal at this week’s diplomatic street theater is not to secure peace for his constituents but to “punish” President Trump for daring to try to bring a peaceful solution to Middle East turmoil. He can count on Russia, China, Indonesia and Kuwait — and perhaps others — to vote against the United States.

If there is any drama to be played out, is how Germany will vote.

Ever since Angela Merkel became chancellor she has championed close ties with the Jewish state, even speaking in German to the Jewish nation from the rostrum of the Knesset in Jerusalem. During that speech, she declared, “We would never abandon Israel.”

But her stirring declaration has not necessarily been matched by diplomacy. Germany is on the Security Council and its ambassador, Christoph Heusgen, has voted against Israel two dozen times. He compared Israeli actions with those of Hamas, earning him a spot on the Simon Wiesenthal Center’s 2019 top 10 anti-Israel/anti-Semitic list.

How Germany votes on the Tunisian resolution counts for several reasons. First, because of its Nazi Holocaust legacy, Germany has an obligation never to endanger the Jewish state. Second, Germany has an outsized influence in the 28-member European Union and around the world. A “No” vote would signal to the Palestinians that 2020 is finally time for them to get serious about peace and state-building. An abstention or “Yes” vote will only convince the Palestinian Authority that it can continue its ways and rely on receiving open-ended financial and diplomatic support from key European nations.

In the meantime, the clock is ticking on President Trump’s $50 billion offer to help the Palestinians, which expires in four years. The only strings attached: accountability and transparency.

America’s allies, led by Germany, must stop coddling the Palestinians. The U.N. Security Council is as good a place as any to start.

Rabbi Abraham Cooper is the associate dean and director of global social action for the Simon Wiesenthal Center.