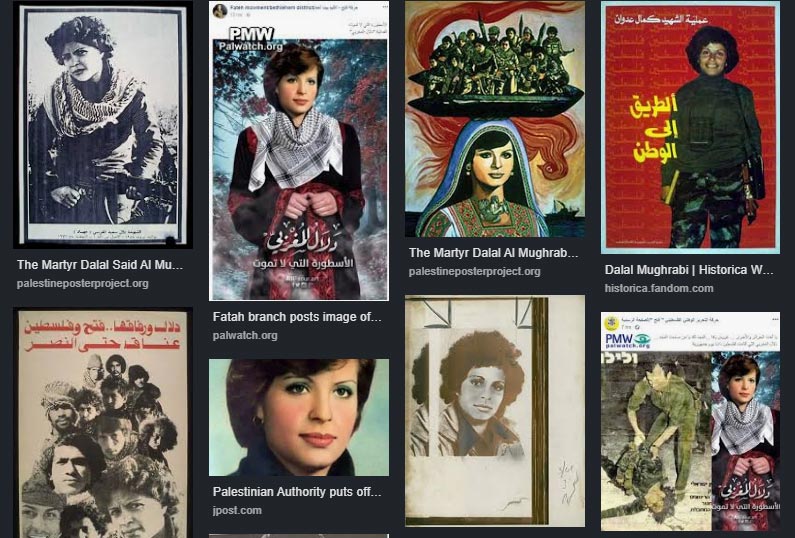 [Follow up question from journalist David Bedein: Does this interview mean that the Dalal Mughrabi posters which dominate UNRWA schools will be torn down?

The phrase “one man’s terrorist is another man’s freedom fighter” may be a cliché, but in the case of Dalal Mughrabi, the difference could define the political landscape of the Middle East for decades to come.

In 1978, Mughrabi took part in the Coastal Road Massacre in which an Israeli bus was hijacked. Thirty-eight Israelis lost their lives in the attack, including 13 children. To Israelis, Mughrabi is a terrorist.

To the Palestinians, she is a national treasure. Children are taught to emulate her example. Five schools under the jurisdiction of the Palestinian Authority are named for Mughrabi, as are town squares, summer camps and a women’s center.

She also pops up regularly in textbooks, where she is lauded as martyr and a hero.

Responsibility for reaching a definitive ruling on Mughrabi’s status – if such a thing is possible – may ultimately fall to Philippe Lazzarini, the incoming commissioner-general of the United Nations Relief and Works Agency (UNRWA) for the Palestinians.

His agency is committed to delivering international quality education to the more than 530,000 children educated within UNRWA’s 708 elementary and preparatory schools in the region. And as we are always told, the children are our future.

So, is Mughrabi a terrorist, or a martyr? What should the children be taught?

“Let’s be clear, there is no glorification of martyrs being taught in UNRWA schools,” Lazzarini told The Jerusalem Post via Zoom from Amman,

Jordan. “There is none of that. No teacher is teaching that.

“We have extremely clear guidance regarding this because UNRWA is also in disagreement with this example [of Mughrabi]. I know this keeps popping up, but UNRWA has given clear instructions that this not be taught in the schools because it can be perceived as incitement, depending on how it is brought to the attention of the children.”

UNRWA is proactive on this issue, Lazzarini told the Post, doing what it can to ensure that incitement is not taught in its schools – while at the same time adhering to the curriculum set by the PA. And therein lies the rub.

In May, the European Union passed resolutions condemning the PA for continuing to teach hate. In response, Palestinian Education Minister Marwan Awartan presented a report to the Palestinian cabinet in which he laid out planned changes to the curriculum. His plans put Palestinian nationalism front and center of the changes, clearly paving the way for a curriculum of heightened division, rather than the toning down the EU had hoped for.

“I recently met the minister of education,” Lazzarini said. “He knows that instructions [not to teach incitement] have been given to the UNRWA schools. I do believe that the UNRWA schools here in the region are definitely a haven for the children to be taught this notion of tolerance.”

He added, “I can tell you that within UNRWA we have a very strict regular process of review of all the materials which are given by authorities and the government to UNRWA to be taught in the schools, and after that we take a decision on what will or will not be taught in our schools, especially if it is crossing the line.”

Does this mean there is a warehouse of confiscated materials somewhere in the region?

“The textbooks aren’t confiscated,” Lazzarini said. “We are telling our teachers how to teach, or we are giving instruction not to teach some part of the materials. UNRWA doesn’t have its own textbooks [it uses those set by the PA] but it has the possibility to say what can be taught or not taught, and whatever crosses the line cannot be taught.”…

UNRWA insists in its publications that its schools uphold a commitment to UN Charter principles, citing the number of girls attending its schools (about half of the pupils in total) as an example of its commitment to gender equality.

But the question is: Can UNRWA truly be apolitical in a region in which even place names – “The West Bank,” “Judea and Samaria,” “The Occupied Territories” – carry political weight?

In an era as highly politically charged as ours, can any public agency be truly objective?

Lazzarini is adamant. The answer to that question, he says, is yes.

“We have zero tolerance for [teaching] incitement or violence. We are focused on human rights values in our schools,” he told the Post.

“We have invested a lot in teaching centers to tell the teachers how to teach some of the textbooks in line with UN universal values. Whenever there is a slightest doubt, we have invested in the neutrality issues.

“I’m not saying it’s easy because of the environment we are operating in,” he added, “but I can proudly say that this is one of the areas where UNRWA has invested the most of its attention and energy.”

Jerusalem Deputy Mayor Fleur Hassan-Nahoum, who has focused for years on the subject of Palestinian textbooks, concurs.

“Either Mr Lazzarini is living with his head totally in the sand or he is misleading the public,” she told the Post.

“UNRWA schools are a hotbed of indoctrination, incitement and total obsession with the right of return. Their schoolbooks are PLO schoolbooks, and their teachers’ manuals are PLO manuals. UNRWA schools are essentially in contravention of UN principles of peace and reconciliation, and are bringing us further away and not closer to a resolution with the Palestinians.

“Their curriculum ensures that the next generation of Palestinian children do not accept our existence, and dedicate their lives to the destruction of Israel. It’s sad that a UN body has ventured so far away from its purpose and today only perpetuates the problem.”

Equity, rather than neutrality, may offer a more productive route to peace, Hassan-Nahoum suggested.

“We hope that in his new role, Mr. Lazzarini will do what his predecessors have refused to do, and that is teach a curriculum of peace and a shared society, and teach Hebrew the way Arabic is taught in Israelis schools, in order to bring us closer together,” she said.

“A country might have more intolerance, but this is not the UN’s policy. At UNRWA, we stick to UN principles and policies.” Lazzarini said.

“How do you be apolitical in a highly political environment?” he asked rhetorically. “I believe… [in] the UNRWA mandate, which is primarily [about] delivering humanitarian and human development services under the [UN’s 2030] agenda’s broader framework, ensuring that no Palestinian refugee could be considered as being left behind, through the 17 sustainable development goals. I do believe that this is the way to promote all rights without any discrimination. It’s not an agenda al la carte, it’s a comprehensive agenda, and I think that this is certainly the only way to go.

“We are not talking about being selective with rights. All of them apply. Some of them might be more difficult because of the nature of the region, but just because they are more difficult doesn’t mean they should not be addressed.

“Since the agenda is non-controversial it should be a vehicle for being apolitical in a highly political environment.”

For the time being, then, a commitment to “neutrality” seems to be the order of the day.

Meanwhile, in the coming days, tens of thousands of Palestinian children will return to school, where they will again be taught that Israel is the enemy.

In response to examples of hate education found in Palestinian textbooks from 2017 and 2019, supplied and translated by Palestinian Media Watch and the Center for Near East Research, UNRWA told the Post in a statement, “UNRWA does not have a mandate to change or reform host country curricula or the related textbooks.”

“Host governments view curriculum development as a matter of national sovereignty, as do all UN member states,” the statement said. “UNRWA therefore follows the curriculum of the host country, but works to ensure that the textbooks used in its schools support the development of key competencies and skills and are in line with UN values and principles.

“However, whilst UNRWA has no mandate to change host-country curricula or textbooks, UNRWA does have a robust system in place for review of host-country textbooks and to address any issues identified, to ensure that the delivery of education in its schools reflects the values and principles of the UN, such as neutrality, human rights, tolerance, equality and non-discrimination with respect to race, gender, language and religion.

“UNRWA is proactive in identifying issues of potential concern through its rigorous rapid review process, and addressing them through its teacher-centered approach.

“With regard to the issue of Dalal al-Mughrabi, UNRWA teachers in Gaza and the West Bank have all been instructed not to teach about her at all. Instructions to this effect were given to both fields [West Bank and Gaza] in autumn 2018.

“As part of the UNRWA approach to any part of the material that does not align with UN values, UNRWA details what and where the issue is; it also expects all teachers to engage their students in addressing any such issue critically.”