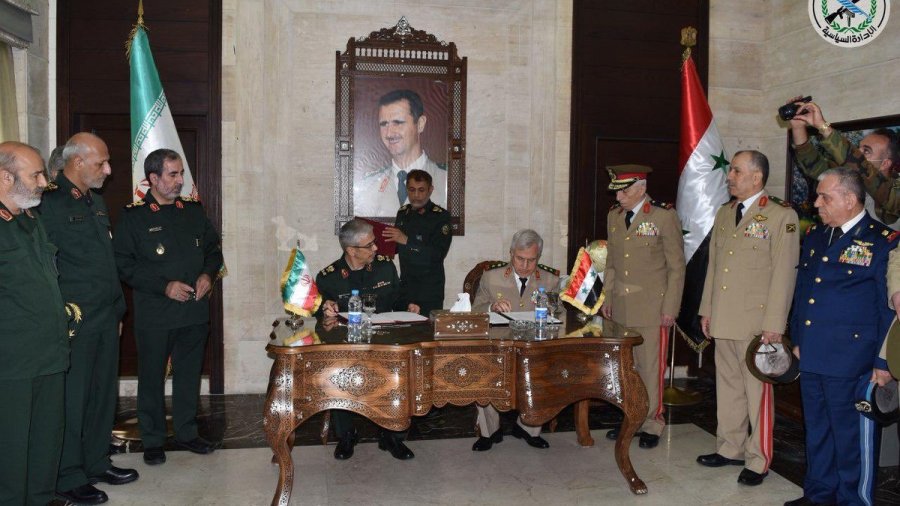 There is little coincidence to the signing of a new military cooperation agreement between Syria and Iran, the recent explosion at the Natanz nuclear plant in Iran, and the implementation of the “U.S. ‘Caesar’ Syria Civilian Protection Act,” which extended sanctions to Syria and to anyone who supports it. The signing of the new Iranian-Syrian military agreement is their response.

Iranian Chief of Staff General Mohammad Bagheri arrived in Damascus on July 9, 2020, and signed the new military agreement with Syrian Defense Minister General Ali Abdullah Ayoub. The most prominent aspect of the deal is Iran’s supply of surface-to-air missiles to Syria to strengthen Syria’s air defenses.

Following the signing of the military agreement in the Syrian Ministry of Defense, Syrian President Bashar Assad welcomed the Iranian Chief of Staff and praised the strategic relations between the two countries.

The critical part of the agreement is the supply of the newest anti-aircraft system developed by Iran. The “3-Khordad” is an air defense system similar to the Russian S-300 surface-to-air missile system, which the Iranians used to shoot down the American Global Hawk drone in June 2019.

According to a report in the Rai al-Youm newspaper on July 13, 2020, one of the commanders of the Iranian Revolutionary Guard, who attended the signing ceremony of the agreement, said, “The rules of the conflict will change.”

According to Syrian sources, Russia refused to give a “green light” to Syrian President Bashar Assad to use the Russian S-300 systems that have been in Syria for more than a year, which are operated by Russian experts. So, the Syrian president turned to Iran for help to contend with continuing Israeli airstrikes on Syrian territory.

Through the new military agreement, Syria and Iran appear to be sending a message to both the United States and Israel that Iran will continue to entrench itself militarily in Syria, that it is a long-term military cooperation, and that the new U.S. “Caesar Act” will not deter them from carrying out their plans.

Iranian Chief of Staff General Mohammad Bagheri said at the ceremony: “Whoever bets on destroying the connection between Damascus and Tehran is living in a delusion and needs to wake up from their dreams.”

Bouthaina Shaaban, political advisor to President Bashar Assad, on July 10, 2020, said on the Almasirah TV channel (run by the Houthi rebels in Yemen) that the new military agreement between Syria and Iran is intended to confront the U.S. “Caesar Act” and strengthen coordination between states in the “axis of resistance.”

A Message to Turkey

Sources in Syria say the agreement is also intended to signal to Turkey that Iran is on Syria’s side when it comes to the Turkish threat in northern Syria.

Iranian Chief of Staff Mohammed Bagheri said at a joint press conference with the Syrian Defense Minister, “Turkey should withdraw its forces from northern Syria and open a dialogue with the Syrian regime.”

In any case, it is impossible to ignore the possibility that Iran and Syria are planning escalation in the region after the explosion at the Natanz nuclear facility, the cyber-attacks in Iran attributed to Israel happening, as well as the continuation of Israeli attacks in the region. Is Iran planning an attack on Israel from Syrian territory?

It is not that clear whether Syria went around the Kremlin and failed to update President Putin on its new military agreement with Iran. The pact strengthens Iran’s position in Syria and makes it a partner of the Syrian Armed Forces.

President Assad is not putting all his eggs in Moscow’s basket. Russian and Iranian rivalry over the control of Syria’s natural resources is no secret, and Bashar Assad is trying to exploit that tension and get the most out of both sides.

Consequences of the Explosion at the Natanz Facility

The assassination of Qassem Soleimani, the explosion at the Natanz nuclear facility, and possibly the damage to its ballistic missile facility in Parchin represent a painful blow to Iran and its strategic ambitions in the region, according to Israeli intelligence assessments. According to the latest satellite imagery of the results from the explosion at the Natanz advanced centrifuge facility, the damage will delay the Iranian uranium enrichment program for some two years.

The Iranians see the blast as the result of close intelligence cooperation between Mossad Director Yossi Cohen and U.S. Secretary of State Mike Pompeo, who once served as CIA chief. The Iranians are awaiting an official report from Iran’s Supreme National Security Council on the official explanation for the explosion before responding.

The assessment by U.S. and Israeli intelligence is that Iran will try to respond without leaving any “fingerprints.” The response is expected to be before U.S. elections in November to avoid a strong response from President Trump and a tough Israeli response with strong American backing.

There are currently disputes in the Iranian leadership about the nature and timing of the Iranian response, all pending the decision of Supreme Leader Ali Khamenei.

The scenarios for a possible Iranian response include:

The military cooperation agreement signed between Iran and Syria is of great importance. There is no smoke without fire, and these two countries are preparing for escalation in the region.