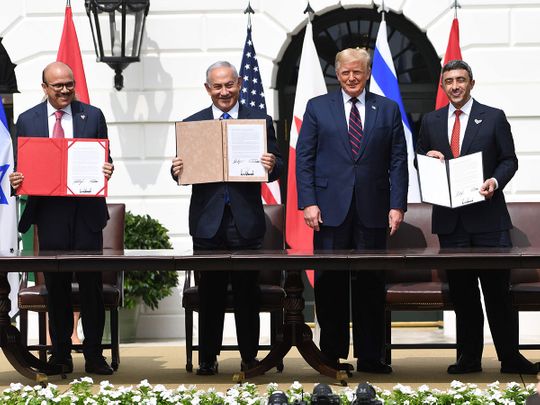 Most Israelis, if they know anything about the United Arab Emirates and Bahrain, know that they’re rich, vulnerable, far from the conflict with Israel, and dangerously close to Iran. It’s this combination of factors that made possible this past week’s White House ceremony.

What many don’t realize is the source of that vulnerability. Just as Israel frets over demography, so too do the Emirates and Bahrain. And any problem that Israel has pales in comparison to theirs.

The United Arab Emirates has a population only slightly larger than Israel’s, about 9.8 million people. But Arab citizens of the country form only about 12 percent—around a million-plus. The rest are migrants who’ve come to work, but don’t have Emirati citizenship or any prospect of getting it. About 60 percent of the country’s inhabitants are South Asians (Indians, Bangladeshis, Pakistanis); the rest are a mix of Filipinos, Nepalese, Egyptians, and others.

In most Arab countries, zealous nationalist regimes oppressed or threw out religious or ethnic minorities, many of them sources of initiative and wealth. In the UAE, by contrast, the Arabs turned themselves into a small minority. They needed migrants to leverage their massive oil wealth into fast-paced development. Otherwise, their huge resources would have languished in distant banks.

So they imported working hands in the millions, confident that they could manage the influx and preserve their own identity and solidarity. So far, it’s worked.

Bahrain is a smaller-scale version of the same dynamic. The population is only about 1.7 million, of whom less than half are Bahraini citizens. The majority are expatriates, although a substantial portion is Arab.

Bahrain’s citizens are divided between a Sunni ruling minority and a Shiite majority. The latter share religion and sometimes ethnicity with Iranians, and constitute the source of most opposition in the kingdom. So far, the monarchy has held its own against opponents, although it relied heavily on Saudi (and UAE) backing to fend off a popular challenge during the “Arab Spring.”

The very rich are different from you and me

They’d have reason enough to feel vulnerable if those were the only numbers in the game. But there are more.

Thanks to Abu Dhabi’s oil wealth, the UAE has a gross domestic product of over $400 billion. Much of this flows to the resident expatriates, but it primarily sustains the affluence of the citizen minority across the seven emirates that make up the union. Bahrain, which also relies heavily on oil (as well as banking and finance), isn’t that far behind the UAE. Just for proportions, the combined gross domestic product of the UAE and Bahrain is equal to Iran’s—and Iran has a population of 82 million.

Over the years, not a few observers have declared that such huge disparities of wealth, and its concentration in the hands of ruling minorities, couldn’t be sustained.

A sample of this view can be found in the book After the Sheikhs, whose author (British academic Christopher Davidson) concluded that the UAE’s rulers “have suffered a serious and likely permanent loss of legitimacy,” and that Bahrain’s monarchy has “the bleakest future” of the Gulf monarchies. His conclusion (in 2012): “Most of these regimes—at least in their present form—will be gone within the next two to five years” (emphasis in source).

The end-is-nigh trope is an old one. In fact, the rulers are perfectly aware of their vulnerability, unlike those Arab rulers who were toppled during the “Arab Spring.” So they have perfected survival strategies that work amazingly well.

The most important is to secure and keep the support of the West, and especially the United States, as a counterweight to the forces of envy that surround them.

But it goes beyond that. After all, Egypt’s Husni Mubarak had U.S. support, and it didn’t save him. So the UAE, in particular, has tried to look, sound, and feel like a showcase of the West. True, it can’t embrace democracy, but it’s embraced a degree of cultural and religious tolerance that has impressed the West.

Whether it’s a branch of the Louvre museum (visited by the recent Israeli press delegation to the country), or an outpost of New York University, such talismans are there for a rainy day. Should the UAE get in trouble with grasping neighbors, public opinion in the West will say: “Let’s save them, they’re one of us.”

A friend of a friend

It’s here that normalization with Israel fits in. Yes, Israel has lots to offer the UAE and Bahrain, and they have much to offer in return. But the real attraction of normalization for the UAE and Bahrain is that good relations with Israel are the default of all enlightened Western countries. An Israeli embassy goes perfectly with a branch of the Guggenheim art museum.

Why now? The United States is pulling back from some of its Middle Eastern commitments. From some, but not all—and certainly not its commitment to Israel, which Americans of all stripes see as “one of us,” even if they disagree with some of its policies. Full and normal relations with Israel raise the UAE and Bahrain to a new category: from “friendly Arab countries that sell us oil” to “best Arab friends of our own best friend, Israel.”

Not only does that strengthen the U.S. insurance policy, it also lines up the pro-Israel lobby in America on the side of the UAE and Bahrain. They’ve always had their own hired lobbyists in Washington, but they never had any grassroots support in America. Now they will.

It’s an upgrade, and it’s become a need-to-have in a time of American retrenchment. It’s also an open-sesame for bigger and better arms deals, and a deterrent against would-be aggressors, above all Iran.

Israel reached this landmark because it’s strong. The Gulf Arabs have reached it because they’re vulnerable. Israel seeks to translate its strength into recognition. The Gulf Arabs seek to translate their recognition into strength. Just how the two sides will negotiate this unequal partnership isn’t in their formal agreements. It’s in the politics ahead.

Cross-posted at Times of Israel.