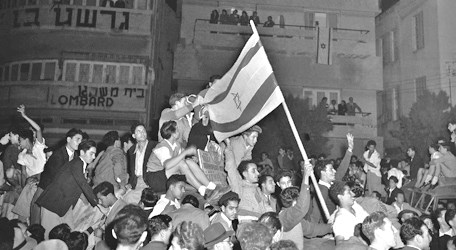 Is it better to rely on diplomatic negotiations or instead to take direct action which promises a far more promising outcome? Is a judicious combination of both more guaranteed to provide success?

These questions have faced Jews throughout their long and tortuous history right up until the present day. At times because of weakness we have had to rely on diplomatic skills to gain a limited breathing space in between crusades, pogroms, expulsions and other myriad forms of hate. Almost without exception diplomacy in these circumstances resulted in very mixed results.

On the other hand, direct and decisive action also did not always end well because of disastrous decisions made by corrupt and self-seeking leaders and destructive behaviour on the part of the rest of the populace. The events of Chanukah which we are about to celebrate exemplify this perfectly. First, we had the inspired leadership of the Maccabees who by their decisive actions led to liberation and the restoration of the Temple in Jerusalem. However soon it was all downhill as their successors, political and religious, lost sight of the real goal and by their actions lead the nation to disaster.

This conundrum of diplomacy versus direct action came to mind because of two momentous events, one occurring 73 years ago and the other as recent as this past week.

On 29 November 1947, the United Nations General Assembly passed a resolution proposing partitioning Mandated Palestine and creating a Jewish and Arab State. This decision was the culmination of intense diplomatic negotiations, backstabbing and reneging of solemn promises stretching back to pre World War 1 times. The Balfour Declaration followed by the San Remo Agreement laid the foundations for restored Jewish sovereignty in the territory from the Mediterranean to the east bank of the Jordan River. San Remo legalized what had been previously just amorphous waffle and it is vital to acknowledge that this treaty was reaffirmed when the UN succeeded its League of Nations predecessor.

True to form the perfidious British Foreign Office managed to unilaterally abrogate signed commitments and established the artificial Hashemite Kingdom of Jordan in part of the territory originally allocated to Jewish settlement. Despite desperate pleas and diplomatic action by Jewish officials the gates of Palestine were slammed shut in the face of fleeing Jews from Nazi threatened Europe. A better example of the futility of diplomacy can hardly be provided. However worse was to follow and with appeasement diplomats in full cry the Nazi and Fascist powers took full advantage of the moral bankruptcy displayed by the democratic nations. Each missed opportunity to seriously confront the looming catastrophe, highlighted to increasingly frantic Jewish leaders in Palestine (if not in the USA) the powerlessness of their situation.

By 1947, just two years after the Shoah, the gates of Mandatory Palestine remained firmly barred to displaced Jews and survivors of the concentration camps. No amount of frantic diplomacy could budge the Jew hating UK Labour Party Foreign Secretary who insisted that Jews trying to enter Palestine be interred in Cyprus or returned to DP camps in Germany. It was only determined action not diplomacy which finally by 29 November compelled the British to hand back the Mandate to the UN. This unleashed a frenetic and frantic flurry of negotiations which culminated in the historic decision to repartition an already portioned country.

The Arabs made no secret of their intention to snuff out any attempt at proclaiming a Jewish State. It was clear that the Arabs had no desire to establish their State in Palestine. Their spokesmen made it clear what their real agenda was: “partition is going to lead to a crusade against the Jews.” (Acting chairman of the Palestine Arab Higher Committee). “The lives of one million Jews in Muslim countries would be jeopardized by partition.” (Arab leaders to the UN).

It was clear that as soon as the British left the combined might of Arab armies would be deployed to annul the UN Resolution and massacre every Jewish man, woman and child. The British trained and led Jordanian Legion stood poised to do exactly that. Not surprisingly the UN remained indifferent and most democratic countries prepared to wash their hands of the “Jewish problem” once and for all. The only reason that this post Shoah genocide did not succeed was because of the bravery, resourcefulness and sacrifices of the besieged Jews. If we would have put all our trust in “diplomacy” we would not be here today to tell the tale. The lessons of the Shoah plus realities in following years have left an indelible impression on Israeli Jews. The bottom line is that we dare not entrust our lives into the hands of duplicitous practitioners of appeasement and endless waffle. Talking is indeed better than war but when the former is merely an excuse to evade tackling the core problem then there is no alternative to being pro-active and confronting evil head-on.

For an insight into the dramas associated with the UN debate in 1947, watch this short video:

This brings us to current events. The elimination of a top Iranian nuclear expert who was involved in developing the means to annihilate Israel has unleashed an avalanche of hypocrisy from every quarter. The EU which never misses an opportunity to avoid facing hard truths issued a statement which should go down in the annals of doublespeak as a prime example of how to incentivize tyrants and plotters of terror: “the EU extends condolences to the family. This is a criminal act and runs counter to the principles of respect for human rights the EU stands for.”  Given the fact that the deceased was a military officer in the service of a country which flagrantly flouts every possible human right possible this EU pontification is unbelievably banal. It is useful to remember that when Eichmann was extracted from Argentina to face trial in Israel, European countries also condemned this as “a criminal act.”

Jumping on the same bandwagon of diplomatic hogwash were Obama era officials now salivating at the prospect of resuming their hypocritical preaching as well as Jewish groups who never will learn the lessons of past fatal accommodations with appeasement of those dedicated to murdering Jews.

Actually, the best reaction came from the Iranian officer’s widow who stated to news media: “my husband wanted to be martyred. His wish came true.”

The bottom line is really quite simple.

Do we continue to put our blind trust in the machinations of those who would prefer to avoid confronting bullies and are prepared to once again serve us up as sacrifices to moral cowardice?

Are we prepared once it is proven that diplomacy has failed, to take our destiny into our own hands and act accordingly?

Given our bitter experiences during the last two millennia one would think that the answers are fairly obvious.