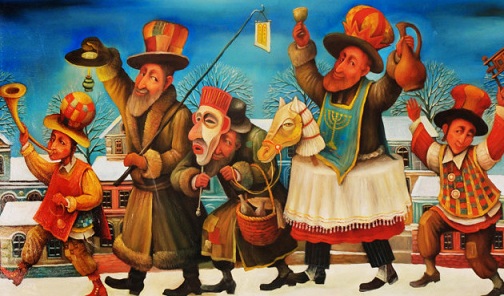 On Shabbat Zachor we reminded ourselves again about the agenda of the Biblical Amalekites and on Purim we celebrate our escape from Persian genocidal catastrophe.

These events have a serious and relevant message for us but the question is, are we listening and have we internalized the lessons being conveyed?

Are we going through the motions of remembrance and celebration but at the same time are we becoming increasingly oblivious to the stark realities of history repeating itself?

It seems that there are once again far too many who prefer to ignore obvious warnings because by pre-empting those who plot to harm us their comfortable lives will be disturbed and disrupted. As in the past, those who sound the alarm are branded as agitators, extremists, misguided and misinformed.

Anyone with a sense of history and who is willing to recognize the similarities of past and present will understand that what we face today is no less a threat to our survival than the events many of us celebrate.

Why did we become slaves in Egypt following the glorious years of Joseph’s administration? As we learn at Passover “there arose a Pharaoh who knew not Joseph.” His new advisors told him that “there exists a group of Hebrews who are multiplying greatly and now pose a threat to the country.”  The rest is history and slavery and serfdom quickly followed.

This may have been the first example of collective conspiracy theories being employed to target us and it certainly set the standard for all subsequent false accusations.

During the forty years trek to the Promised Land (Canaan, not the USA or Europe) the Israelites were attacked by the Amalekites who sensed that there was an opportunity to rape, pillage, plunder and murder a multitude consisting of the elderly, women and children and hitherto not renowned for their military prowess. After all, our ancestors were ex-slaves used to servitude and subservience. The Amalekites became the prototypes for future generations of Jew-haters who seized every opportunity to demonize and despoil us as we were defenceless, weak and unable to retaliate.

We were instructed to deal harshly with the Amalekites and ensure that their successors would not ever have the opportunity to carry out their nefarious plans. Unfortunately, weak leadership and misplaced compassion starting with King Saul ensured that the poisonous seeds planted in the wilderness of Sinai instead of being uprooted would survive, flourish and reinfect every generation. How many religious Jews who listen to the reading on Shabbat Zachor just before Purim take the lessons seriously, preferring instead to partake of the Kiddush waiting at the end of the prayers? Those who never enter a place of worship continue to miss the message and blithely remain disconnected from our historical experience.

The Festival of Purim for those who participate is ostensibly a celebratory occasion of reading about how Persian Jews were saved from genocidal oblivion. It has become a time of mass gatherings for religious and secular alike centred around parades, fancy dress, parties and shpiels, plays and skits lampooning everyone and a great opportunity to indulge in political satire and good old Jewish humour. Basically, there is nothing wrong with letting down one’s hair (if you have any) and having a good time. Heaven knows we have plenty of sad events to commemorate in our calendar.

Unfortunately, we seem to have lost sight of the real message as we indulge in activities designed to numb us to what is really developing in the real world.

What did Haman, the architect of our intended demise, say to convince the King that his Jewish subjects were a dire threat?

“There are a certain people, scattered and dispersed in all the provinces of your realm, where laws are different from those of any other people and who do not obey the King’s laws. It is not in your Majesty’s interest to tolerate them. Let an edict be drawn up for their destruction.”

This justification for expelling and murdering Jews became the “gold standard” of all subsequent pogroms, expulsions, forced conversions, discriminatory laws and ultimately mass murder. Whispering campaigns spreading malicious lies and assertions seeped into each and every society where Jews were concentrated. Unlike the Purim story, subsequent generations lacked the leadership and means to fight back. If there is one clear theme it is that dispersed and vulnerable, Jews would always be at the mercy of rabid haters and with a few notable exceptions could never rely on the protection of rulers. In fact, until post Shoah times Church authorities also actively colluded with and aided and abetted the persecution campaigns.

The Festival of Purim has come to symbolize some sort of a Jewish triumph over evil. We have become so used to tragedies over the millennia that any such event no matter how minor is seized upon as an excuse to make merry. My argument is that instead of losing our sense of reality we should instead sober up and look more closely at the situation.

Purim is the only religious holiday which revolves around exile in a land distant from the Promised Land. It should symbolize the precariousness of Diaspora life rather than glorify a last minute escape from disaster.

Instead, what do we do on this day?

We wear masks (non-Corona variety) which cover our entire face and disguise us. Adults dress up in costumes which divert their attention from who they should really be. True, we give gifts to others but this has become so commercialized that the real meaning is submerged. We make a noise when Haman’s name is read during the reading of the Megilla as if this will nullify his and successive Amalekite hatred of our People. Worst of all is the belief that getting drunk so that we cannot differentiate between Haman and Mordechai is somehow a religious obligation.

This growing inability to distinguish between good and evil is in my opinion the worst corruption of all because it prevents increasing numbers of individuals, young and older alike, from recognizing the threats that are looming in front of them. When academics, media experts and self-loathing others begin to rubbish the idea of restored Jewish sovereignty and instead laud the benefits of exile you know that we are in serious trouble.

We need to reorientate our celebration of Purim so that it more accurately reflects our determination to fight the haters, educates our future generations and secures our security in the Land which has been our inheritance since the time of Abraham.