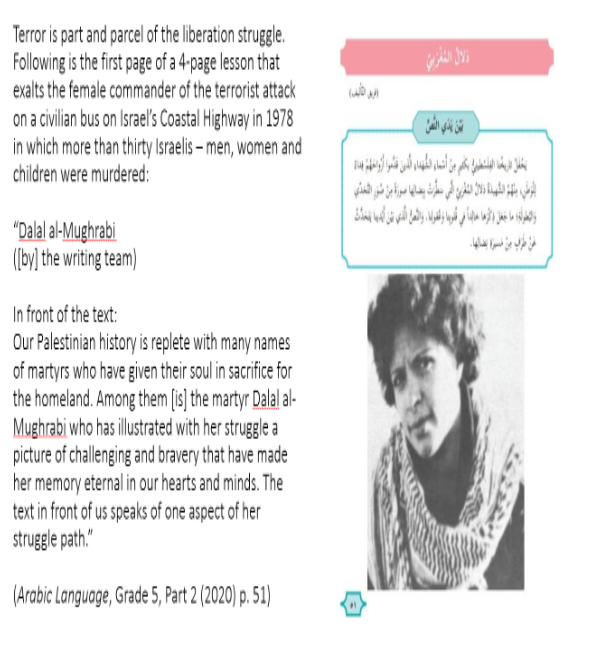 On July 14,  Philippe Lazzarini, UNRWA Commissioner-General of UNRWA.  signed on to a new “memo of understanding” with the US government.

The revolutionary aspect  of this document was  that this was the first time that  a donor nation to  UNRWA actually attached clear conditions to their financial participation in the UNRWA budget – Indeed, this development is a first in the history of UNRWA’s 72 years of existence.

Until 2018, when President Donald Trump decided to freeze all funds to UNRWA, the US had been the largest UNRWA donor from very the very inception of the UN agency. However, the Trump administration concluded that the systemic incitement of UNRWA stood in the way of peace.

Ever since the US administration in Washington changed, all eyes have been on the new President, Joe Biden – who made a campaign promise to find a way to restore financial aid to UNRWA.

In that context, the new US administration , created new conditions for renewed US aid:

(1) utilizing Operations Support Officers in the West Bank, Gaza, and other fields of operation to inspect UNRWA installations and reporting any inappropriate use;

(2) acting promptly to address any staff or beneficiary violation of its own policies (including the policies on neutrality and impartiality of employees) and the legal requirements under section 301(c) of the Foreign Assistance Act of 1961;

(3) implementing procedures to maintain the neutrality of its facilities, including implementing a no-weapons policy, and conducting regular inspections of its installations, to ensure they are only used for humanitarian or other appropriate purposes;

(4) taking necessary and appropriate measures to ensure it is operating in compliance with the conditions of section 301(c) of the Foreign Assistance Act of 1961 and continuing regular reporting to the Department of State on actions it has taken to ensure conformance with such conditions;

(5) taking steps to ensure the content of all educational materials currently taught in UNRWA-administered schools and summer camps is consistent with the values of human rights, dignity, and tolerance and does not induce incitement;

(6) not engaging in operations with financial institutions or related entities in violation of relevant United States law, and is taking steps to improve the financial transparency of the organization; and

(7) in compliance with the United Nations Board of Auditors’ biennial audit requirements and is implementing in a timely fashion the Board’s recommendations.”

The fact that aid is to UNRWA must now meet the above conditions- for the first time – is not only a step in the right direction, and it  may demonstrate that  US habit of showing a blind eye to UNRWA polcies are over.

Indeed, the document signed by Lazzarini  states that UNRWA is ”[…] taking steps to ensure the content of all educational materials currently taught in UNRWA-administered schools and summer camps is consistent with the values of human rights, dignity and tolerance and does not induce incitement” is stated within the context of curricula used at UNRWA which is rife with anti-Semtism and calls for genocide against the Jews in Israel.

From an examination conducted by Dr. Arnon Groiss of more than 1,000 texts published by the education ministries of the PLO and its administrative arm, the PA, responsible for the content of the textbooks, there is not one reference to the existance of Israel – even within its 1949- 1967 cease fire lines.

Perhaps as a sign of good will, UNRWA and the PA dropped a most incendiary a 3rd grade PA/ UNRWA textbook from the school curriculum to be used in the new school year:

I have sworn, I shall sacrifice my blood, to water the nobles’ land and to remove the usurper [code name for Israel] and to exterminate the foreigners’ scattered remnants […]”

Textbooks with such content are undoubtedly not in accordance with UN values and should accordingly be removed from the UNRWA curriculum, especially now that UNRWA has committed itself to resolutely combating any form of hate speech in its facilities.

The question remains: What concrete steps will  UNRWA itake next to finally ban incitement from the rest of its text books.

When asked whether UNRWA is going to revise its curriculum in the course of this, Tamara Al-Rifai, Director of Strategic Communications for UNRWA responded rather defensively, saying that  “UNRWA neither has its own curriculum nor does it issue or print its own textbooks.In line with proven practice in education for refugees, UNRWA uses the host governments’ curricula to help children transition from UNRWA schools to local schools”. The UNRWA spokeswoman went on to clarify that this means that they will continue to use the PA school books in the UNRWA schools.

In other words, in the new school year, the Palestinian Authority textbooks, which incite  war with  Israel, will stll  be used in UNRWA schools.

If that remains the case, the anti-incitement memo of which UNRWA signed with the US will be rendered useless, unless the US and the other major UNRWA donor nations step in and question content such as the following examples from UNRWA schools. 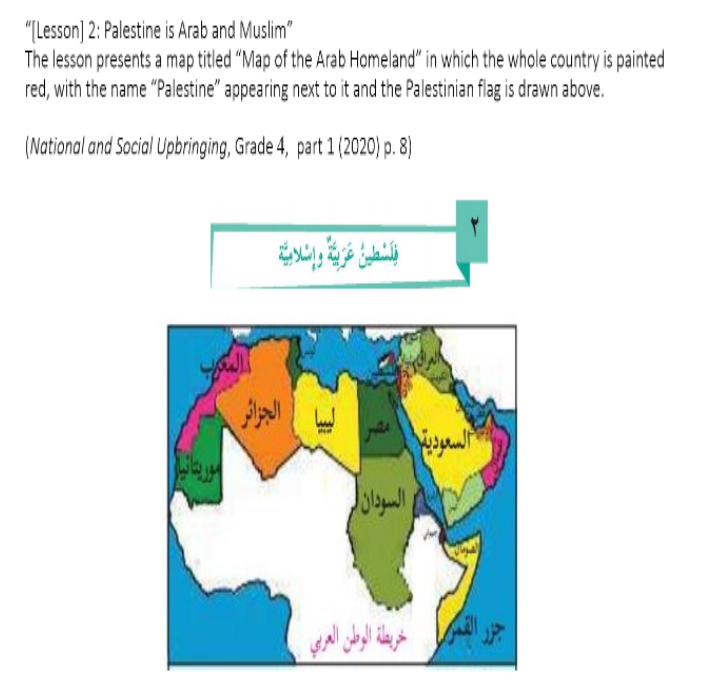 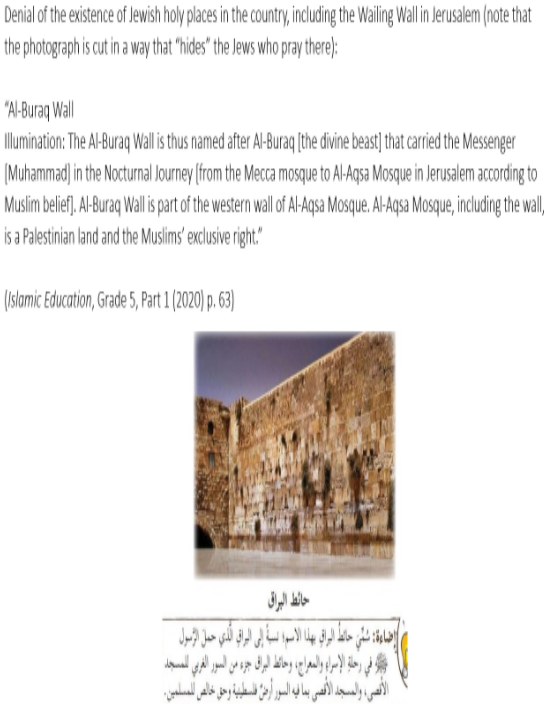 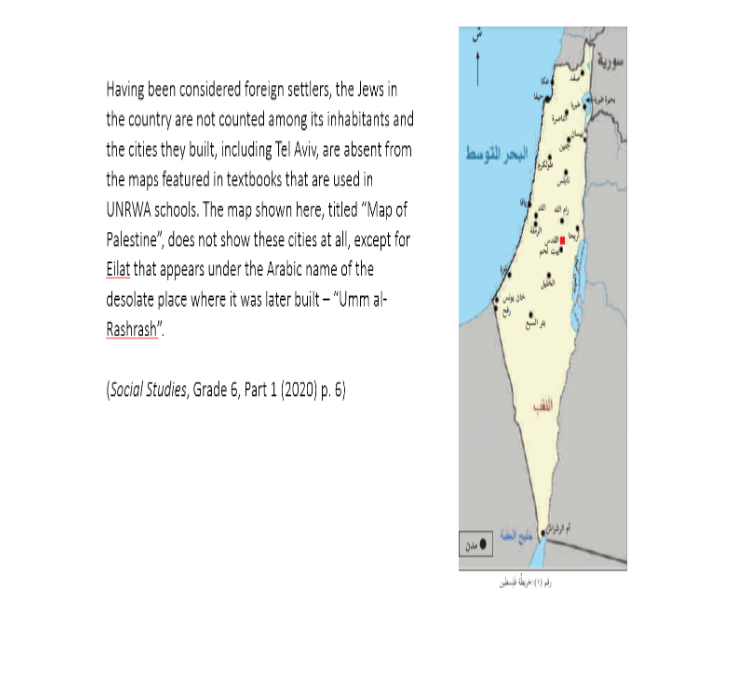 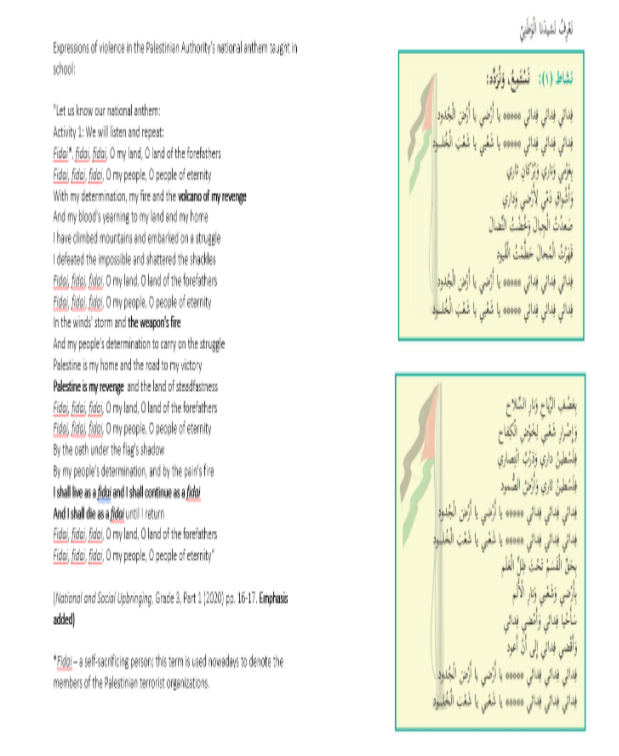 Yet the unkindest cut of all, occurred on August 1st 2021, when the respected organization known as ‘UN WATCH’ issued a scathing comprehensive report which documented more then 100 UNRWA teachers who conducted classes in UNRWA schools, which incited hundreds of UNRWA students to engage in the act of violence. https://israelbehindthenews.com/2021/08/02/report-un-teachers-celebrate-deaths-of-israelis/