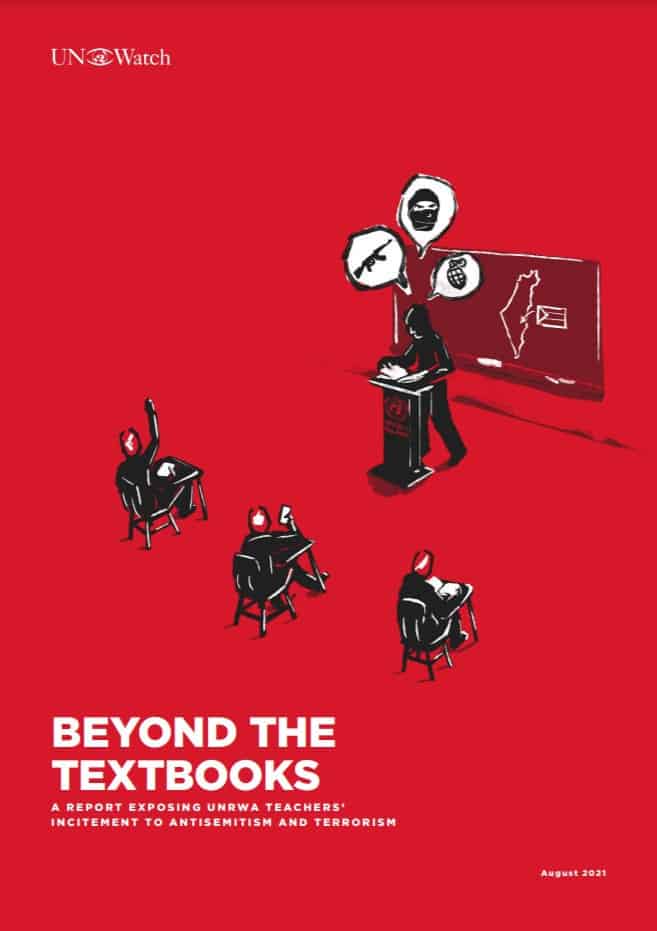 The UN agency that runs schools and social services for Palestinians is facing calls to fire employees using social media to celebrate attacks on Israelis and promote anti-Jewish hatred.

Over 100 UNRWA educators and staff have publicly promoted violence and antisemitism on social media, according to a new report published by the non-governmental organization UN Watch, an independent human rights group based in Geneva.

The report, entitled “Beyond the Textbooks,” uncovers 22 recent cases of UNRWA staff incitement which clearly violate the agency’s own rules as well as its proclaimed values of zero tolerance for racism, discrimination or antisemitism. UN Watch is calling on the agency’s major funders — including the U.S., Germany, the UK and the European Union — to hold UNRWA accountable to its own standards and commitments.

As revealed in the report, UNRWA staff stationed in Gaza, the West Bank, Lebanon, Syria and Jordan have publicly incited antisemitism and terrorism. Among the educators who have used their personal social media channels for such propaganda are UNRWA Gaza math teacher Nahed Sharawi, who shared a video of Adolf Hitler with inspirational quotes to “enrich and enlighten your thoughts and minds.” Husni Masri, an UNRWA teacher in the West Bank, posted antisemitic conspiracy theories according to which Jews control the world, created the coronavirus and seek to destroy Islam.

UN Watch’s report lists a total of 113 cases that it managed to capture from UNRWA employees’ public pages alone, all celebrating and promoting violence, even among young children. The watchdog group only examined a sample of Facebook users who publicly identified themselves as UNRWA employees, and estimates that the actual number of UNRWA staff who incite violence and hatred includes many more of the agency’s 30,000 staff.

UN Watch further reveals that despite its numerous prior requests and submission of detailed evidence, UNRWA has failed to fire teachers who incite to racism and terrorism, nor has it taken any other meaningful action. UNRWA should therefore be considered complicit in its staff members’ misconduct, says UN Watch.

UN Watch Director, Hillel Neuer: “Around the world, educators who incite hate and violence are removed, yet UNRWA, despite proclaiming zero tolerance for incitement, knowingly and systematically employs purveyors of terror and anti-Jewish hate.

“We call on the governments that fund UNWRA to take action to stop the vicious cycle of generations being taught to hate and violently attack Jews. We demand that UNRWA address the core problem, and demonstrate its genuine commitment to basic norms of education in its schools, by publicly condemning UNWRA employees who incite terrorism and antisemitism, removing them from their positions, and creating an independent and impartial investigation of all of its staff.”

Among UNWRA teachers and staff exposed in the report are the following:

The Executive Summary follows below.

A REPORT EXPOSING UNRWA TEACHERS’
INCITEMENT TO ANTISEMITISM AND TERRORISM

This report documents systematic incitement to antisemitism and terrorism by teachers, school principals and other staff at the United Nations Relief and Works Agency (UNRWA), and calls on its major funders, including the U.S., Germany, the UK and the European Union, to finally hold UNRWA accountable to its own rules and commitments.

On April 7, 2021, the Biden administration announced its decision to renew funding to the Palestinians, including $150 million to UNRWA. By July 2021, it was reported that the U.S. funding to UNRWA for 2021 rose to $313.8 million.

In this regard, the State Department’s proposed FY22 budget contains provisions requiring the State Department to report to the Senate Appropriations Committee prior to the release of funds to UNRWA on whether UNWRA is “acting promptly to address any staff…violations of…neutrality and impartiality” and whether it is taking steps to ensure the content of UNRWA’s educational materials “is consistent with the values of human rights, dignity, and tolerance and does not induce incitement.”

In a June 8 hearing before the Senate Appropriations Committee on the proposed budget, Secretary of State Blinken confirmed that the U.S. is “determined that UNRWA pursue very necessary reforms in terms of some of the abuses of the system that have taken place in the past,” particularly dissemination of “antisemitic or anti-Israel information” in education.

According to a senior State Department official, “UNWRA has made clear their rock-solid commitments to the United States on the issues of transparency, accountability, and neutrality in all its operations,” adding that “what neutrality means in the context of the United Nations is zero tolerance for racism, discrimination, and antisemitism.”

Similar commitments were given by UNRWA in its Framework for Cooperation agreement with the U.S., signed on July 14, 2021, in which the agency condemns incitement to violence and antisemitism, undertakes not to support terrorism directly or indirectly, affirms that UNRWA and its staff “cannot take sides in hostilities or engage in controversies of a political, racial or religious or ideological nature,” and promises “clear, consistent and prompt administrative action for staff violations of UNRWA’s Neutrality Framework.”

Contrary to these claims and commitments, however, UN Watch has found that UNRWA has a very high tolerance for antisemitism. As summarized in the list of perpetrators published as Annex A of this report, UN Watch has exposed more than 100 UNRWA staff and school Facebook pages containing incitement to antisemitism and terrorism. These were revealed in six separate reports published between September 2015 and September 2019.

Although UNRWA received our reports and is well aware of the problem, the agency continues to systematically employ schoolteachers, principals and other staffers who openly support terrorism and antisemitism.

In the last several months, UNRWA has fundraised extensively for its education, which it claims shapes UNRWA students to be “responsible global citizens with an appreciation for human rights and hope for the future.”

This report, however, documents more than 100 UNRWA staffers, including 22 new examples, of UNRWA staffers in Gaza, the West Bank, Lebanon, Syria, and Jordan, who incite antisemitism and terrorism, in gross violation of United Nations and UNRWA internal policies concerning staff neutrality and impartiality.

Were UNRWA itself to examine its employees, on and off Facebook, it can reasonably be estimated that thousands of UNRWA employees would be implicated.