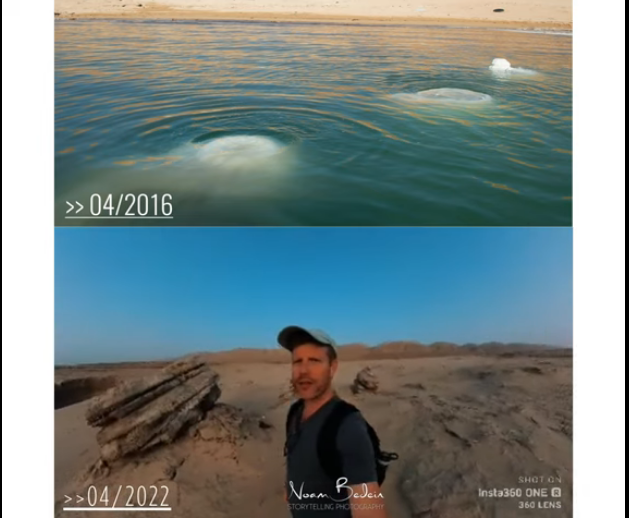 Israel’s National Water Authority and Israel Chemicals Ltd. are the addresses in Israel with the main power to influence the restoration of the Dead Sea. In the last year alone, the Dead Sea has lost more than 540 million cubic meters of water, equivalent to 219,000 Olympic swimming pools.

Earth Day 2022, marks exactly 6 years since the founder and director of The Dead Sea Revival Project, Noam Bedein started exploring in depth and documenting the decline of the Dead Sea’s water level. The changes in the landscape are very dramatic and yet incredibly beautiful. It’s an illusory beauty.

In order to stabilize and maintain the water level of the Dead Sea, 750M of cubic water is required. Freshwater and not salt water. Historically, the Jordan River has been the main source of water, providing over one billion cubic meters of water. Today, the flow of the southern Jordan River into the estuary of the Dead Sea reaches 10% of its natural flow.

How much is 750M cubic water? Israel’s five desalination plants, which together supply up to 75% of Israel’s drinking water, together reach 550M cubic meters of water.

The Dead Sea needs even more than that.

The natural water sources of the Dead Sea (the Jordan and the Sea of Galilee) are disconnected from each other. The historical flow of water does not reach the Dead Sea today.

Although last winter was considered the fourth consecutive year of a blessed rainy season that filled the Sea of Galilee – Israel’s national water lake, it does not affect the Dead Sea, as there is no flow to it.

The State of Israel allocates annual amounts of water from the Sea of Galilee and the Jordan River to its thirsty neighbor from the Kingdom of Jordan. In fact, the amount of water to Jordan has doubled this year, to 100 million cubic meters.

Why is there no demand from the National Water Authority to allocate water flow from the Sea of Galilee in order to stabilize the Dead Sea, the World Wonder shared with the Jordanians?

Where are the discussions about the conditions for opening the Degania dam of the Sea of Galilee for water flow in the Jordan River that is supposed to eventually flow into the Dead Sea, especially during rainy seasons when the water level is high?

The Dead Sea Revival Project, together with the residents of Kibbutz Kalia who live on the shores of the receding Dead Sea, call on the National Water Authority for a response.

Beyond that, we ask the Water Authority to be proactive and involve by all means as possible the main address that must take part in the solution – the Dead Sea Works, Israel Chemicals Ltd.

They are responsible for pumping up to 30% of the Dead Sea’s water, and exporting the rich minerals, using the water to fill the salt pools used by Ein Bokek tourism.

Israel Chemicals has the financial capacity to lead the ‘restoration of the historic flow to the Dead Sea’. It must also have a moral responsibility to do so, along with Israel’s tourism industry in the artificial Southern Dead Sea.

A visual archive was built with over 25,000 photographs from recent years taken of our world wonder, showing fascinating life-rich hidden layers exposed at the lowest point on earth, revealed due to the sea level drop that is currently at the lowest level in recorded history.

Earth Day 2022, is the perfect time to use innovative tools to help preserve the ancient water treasure, and give people around the world a chance to own a digital artistic photo memory that testifies this magical water treasure.

Recently, 100 selected images were donated to OpenSea, the largest NFT (non-fungible token) market in the world, creating a digital art collection for the World Heritage Site, hoping to raise environmental awareness in the virtual universe gaining popularity- The Metaverse. The more virtual awareness it spreads, the closer the development of the physical infrastructure for the Arad Dead Sea Museum of Art.

All the subjects and landscapes in these photos are long gone.

Come and hold the momentary digital art of the Dead Sea-