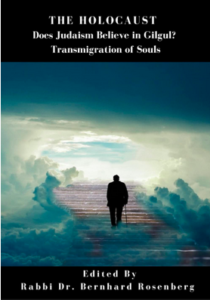 The author of The Holocaust: Does Judaism Believe in Gilgul? Transmigration of Souls begins with a wonderful quote from the famed psychologist Carl Gustav Jung:

“Rationalism and doctrinairism are the diseases of our time; they pretend to have all the answers. But a great deal will yet be discovered which our present limited view would have ruled out as impossible. Our concepts of space and time have only approximate validity, and there is therefore a wide field for minor and major deviations. In view of all this, I lend an attentive ear to the strange myths of the psyche and take a careful look at the varied events that come my way, regardless of whether or not they fit in with my theoretical postulates.” (Memories, Dreams, Reflections)

Children of Holocaust survivors often grapple with the legacy their parents left them. As more of the older generation passes the torch to the next generation, how do we make sense of the greatest tragedy of Jewish history?

For those of us who have grown up in traditional Jewish homes where our parents did their best to give us a proud Jewish identity, how do we make spiritual sense of the Holocaust without sounding trite or superficial? Regardless of the denominational histories of our families, the questions remain the same: What does our faith in God and in faith mean in a generation that is still picking up the ashes of trauma and memory?

Like Jacob in the Bible, our collective Judaic psyche is wrestling with God. The good news is this is not the first time Jews have grappled with loss and disorientation. According to Josephus, the Romans murdered nearly 2 million Jews in their conquest of Judea and Jerusalem. Yet, despite the loss of 6 million, our people remain poised and are surviving against the odds.

As a rabbi and a teacher of Judaic texts, I have marveled at the books written about this subject. In my own writings, I have tried to put the pieces together.

One of the most interesting books I have read in recent years on this topic is Rabbi Dr. Bernhard Rosenberg’s new thought-provoking book. On the surface, Rabbi Rosenberg’s fusion of the Holocaust and reincarnation might seem like he is trying to yoke a donkey and an ox together. What could be more incongruous? The Holocaust is a daunting subject to write about whether one approaches it from a historical or a theological perspective. The belief in reincarnation is also a challenging topic—especially since it is primarily an Eastern religious belief; yet it resonates throughout much of the Kabbalah.

Chief Sephardic Rabbi of Israel Ovadiah Yosef, the leader of Israel’s biggest ultra-Orthodox political party, shocked the Jewish world when he said on Aug, 6, 2000, that the 6 million Jews who perished in the Nazi Holocaust died because they were reincarnations of sinners in previous generations. Yosef called the Nazis “evil” and the victims “poor people,” but he concluded that the 6 million “were reincarnations of the souls of sinners, people who transgressed and did all sorts of things which should not be done. They reincarnated to atone. After all, people are upset and ask why was there a Holocaust? Woe to us, for we have sinned. Woe to us, for there is nothing we can say to justify it,” he said. “It goes without saying that we believe in reincarnation,” continued Yosef. “It is a reincarnation of those souls. Our teacher, R. Isaac Luria, [a.k.a., “Ari”] said that there are no new souls in our generation; all the souls were once in the world and have returned. “All those poor people in the Holocaust we wonder why it was done. There were righteous people among them. Still, they were punished because of sins of past generations.” According to Yosef, the concept of reincarnation anticipates the objection that apparent innocents—children and pious elders—were among the Holocaust’s victims. This could only be due to sins that these souls committed from a previous lifetime.

Rabbi Rosenberg assembled several fine Jewish writers and rabbis who discussed the topic. I must confess that I was surprised when he asked me to contribute some of my thoughts on this topic.

The more I thought about the topic, the more I began to wonder: Can the trauma of the Holocaust be someone mysteriously transmitted to a new generation? We all carry the genetic histories of the human race, but could psychological or spiritual traits also be transmitted to the next generation?

There is much about trauma and genetics we do not know, yet surprisingly, some evidence indicates that trauma may be genetically transmitted. For example, in 2013, a controlled experiment with mice allowed researchers to answer this question. A study found an intergenerational effect of trauma associated with scent. Martha Henriques noted that the researchers blew acetophenone – which has the cherry blossom scent through the cages of adult male mice. The researchers zapped their feet with an electric current at the same time. Over several repetitions, the mice identified the smell of cherry blossom with pain.

Shortly afterward, these males were bred with female mice. When their pups smelled the scent of cherry blossom, they became more jumpy and nervous than pups whose fathers hadn’t been conditioned to fear it. To rule out that the pups were somehow learning about the smell from their parents, they were raised by unrelated mice who had never smelt cherry blossom. The grandpups of the traumatized males also showed heightened sensitivity to the scent. Neither of the generations showed greater sensitivity to smells other than cherry blossom, indicating that the inheritance was specific to that scent. This sensitivity to cherry blossom scent was linked back to epigenetic modifications in their sperm DNA. Chemical markers on their DNA were found on a gene encoding a smell receptor, expressed in the olfactory bulb between the nose and the brain, which is involved in sensing the cherry blossom scent. When the team dissected the pups’ brains, they also found a greater number of neurons that detect the cherry blossom scent than control mice.

It is an interesting question that certainly pertains to the children and grandchildren of Holocaust survivors or virtually any people who have suffered PTSD. Yet, as the psychiatrist Ian Stevenson pointed out, there are ample cases where the recollection of a past life does not have any genetic connection. Ian Stevenson has written over 600 articles on the subject based on his experiences working with Hindu children who had a recollection of past life memories.

The subject did come up, and here is the second part of that discussion, but this time, it is the Dali Lama himself who offered a more detailed answer to the original question:

Frankly, I am astonished that Reb Zalman did not challenge the Dali Lama and his followers. Perhaps they did not want to seem as though they were impolite guests. But fortunately, other leading Buddhist thinkers took issue with the Dali Lama.

In short, I feel glad to have been a part of this literary project. I think the readers will find the subject matter intriguing, if not a bit controversial.

Once again, I extend kudos to the author for writing, Does Judaism Believe in Gilgul? Transmigration of Souls.
*

Rabbi Dr. Michael Leo Samuel is spiritual leader of Temple Beth Shalom in Chula Vista. He is the author of Rediscovering Philo of Alexandria, Maimonides’ Hidden Torah Commentary, and The Forgotten English Torah Commentator (2022). He may be contacted via michael.samuel@sdjewishworld.com