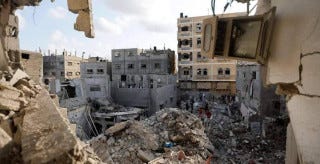 Deterrence — the act of deterring especially deterring a nuclear attack by the capacity or threat of retaliating.

Since Israel’s unilateral withdrawal in 2005, the Gaza Strip has turned into the leading military foe of the Jewish state. There have been at least a dozen mini- and full-fledged wars in which Israel, with one of the most powerful militaries in the world, was unable to defeat the Iranian-aligned Hamas and its allies. With each confrontation, the Iranian proxies have grown stronger and Israel weaker.

Last week, the Iranian-sponsored Islamic Jihad fired more than 1,000 missiles and rockets in a little more than two days, many of them reaching deep into Israel. The projectiles struck Israel’s biggest cities, including Jerusalem, Tel Aviv and Beersheba, overcoming Israel’s air force and Iron Dome defense system. As in previous conflicts, Israel refrained from ground operations in the Gaza Strip, thus leaving its huge missile and rocket infrastructure intact.

“Iran orchestrated everything that happened inside and along the Gaza borders,” Yoni Ben Menachem, a leading Israeli analyst, said in a report for the Jerusalem Center for Public Affairs. “Ziad Al Nakhalah, the Islamic Jihad leader, visited Teheran’s leaders and ran the campaign in coordination with the Iranian Revolutionary Guard.”

Israeli leaders, facing an election, pleaded for an Egyptian-arranged ceasefire and then declared victory. They claimed that the military had prevented Jihad strikes and even killed its entire leadership.

“In the future, if necessary, we will carry out preemptive strikes to protect the citizens of Israel, its sovereignty and infrastructure,” Defense Minister Benny Gantz said. “This holds true to every front, from Teheran to Khan Yunis,”

The mentor is China

If Iran has a mentor, it is China. Over the last 20 years, a patient Teheran has developed the military capabilities of the Palestinians in the Gaza Strip, defying Israeli threats to recapture the area. IRGC has expanded the range of Hamas and Jihad rockets and missiles from eight to at least 160 kilometers, sufficient to reach every major Israeli city. The Iranians have developed attack drones and balloons that could bomb Israeli communities. They have formed a network of tunnels that would allow the Palestinians to capture entire communities near the Gaza Strip.

“During its wars in Gaza, Hamas morphed from an irregular adversary to a hybrid one with qualities that only state actors possessed previously,” the Rand Corp. said in a report in 2017.

To prevent Israel from recapturing the Gaza Strip, Iran uses its allies in Europe and the United States to restrain the Jewish state. For its part, Israel has pledged to Washington and Cairo to preserve the Hamas regime and refrain from ground operations in Gaza, thus ensuring that Palestinian missile wars could last weeks or even months.

Iran has a strategic vision: using the Gaza Strip for a multi-front war against Israel. In the fog of war, Hamas and Jihad have tested weapons for firepower, range and accuracy. So far, the Palestinians have shown they could fire salvos of up to 100 projectiles and reach any strategic facility, particularly the nuclear complex in the southern city of Dimona.

The big day will come when Iran unleashes a much larger proxy — Hizbullah. Based in Lebanon and Syria, Hizbullah commands an arsenal of more than 200,000 missiles and rockets, greater than most conventional militaries. Drawing lessons from Hamas and Jihad, Hizbullah has been training to fire salvos of up to 1,000 missiles and rockets that could destroy major Israeli cities within minutes. It has developed an air defense network in coordination with Syria and bolstered by Russia, which deployed its advanced S-300 air and missile defense system near the Lebanese-Syrian border.

Israel’s victory claims aside, Hamas and Jihad casualties play no role in Iran’s strategy. Teheran regards the Palestinians as little more than cannon fodder, preserving Hizbullah for the big war. The Jihad commanders Israel killed in the latest round are easily replaceable because IRGC directly controls operations in the Gaza Strip.

So, what has Iran achieved in the latest round? Teheran, preparing for the removal of Western sanctions, proved it determines stability in the region. IRGC, in what will have repercussions throughout the Middle East, tested its new command and control assets that maintain direct contact with the Gaza Strip.

Perhaps most important is that Israel has become complacent, its citizens resigned to missile strikes on their cities and dependent on the international community to restore temporary quiet. Therefore, an obedient Israel bolsters Hamas and increases shipments of goods, including concrete, steel and electronics, required by military forces in Gaza. The entry of 14,000 Gazan laborers in the Jewish state has become sacrosanct. In other words, Iran pays no price in its war with Israel

“Hamas emerged intact, and the benefits Israel gives it and its image as the leader in the Palestinian system were not eroded,” Israel’s Institute for National Security Studies said.