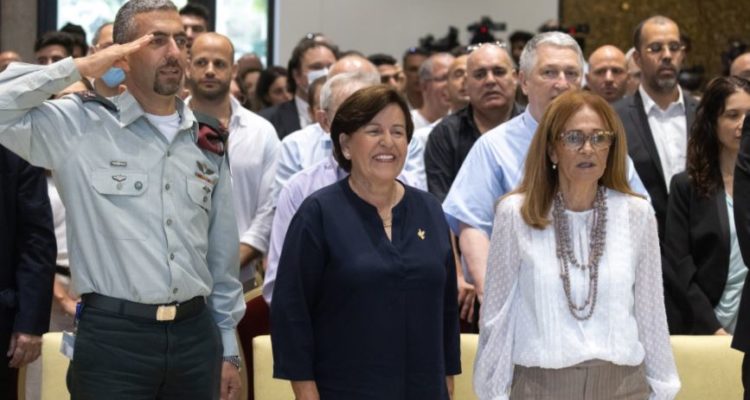 The families of the 1972 Munich Olympic Massacre victims said they plan to boycott a memorial ceremony marking the 50th anniversary of the attack in protest over the German government’s “degrading” offer of compensation.

The ceremony is scheduled to take place in Munich in September, with President Isaac Herzog slated to attend.

“We expect President Herzog to also announce, immediately, that he is not coming,” Ankie Spitzer, whose husband Andrei was one of the 11 murdered Israelis, told The New York Times.

“If the families don’t travel, he shouldn’t travel either because if he is there, even to lay a wreath, it will legitimize this cruel German behavior,” she added.

According to The New York Times, Berlin has paid out $4.8 million in compensation and has offered a further $5.58 million to 23 remaining family members, but the families are seeking 20 times that sum.

Ilana Romano, widow of Israeli weightlifter Yossef Romano, said Germany “threw us to the dogs. They mistreated us for 50 years.”

“The offer is degrading, and we are standing by our stance that we are boycotting the (anniversary) ceremony,” she told German newspaper Süddeutsche Zeitung. She added that the compensation would be rejected.

Palestinian terrorists from the Black September terror group broke into the Olympic Village where the Israeli athletes were staying, killing two and taking others hostage. They demanded the release of 234 Palestinians in Israeli prisons as well as members of the German leftwing Baader Meinhoff terror group in German jails.

The hostages and a police officer were killed during a failed rescue attempt by West German police.

“They decided to take responsibility — very nice after 50 years,” Romano said, adding that she expected real compensation, not “pennies.”

“If the German government thinks it can wrap up this matter according to terms set for of a domestic terror attack, they are wrong,” she said. “They will pay in accordance to international standards in terror attacks. The Palestinian terrorists cannot be given more money than the victims.”

“Three of the terrorists survived, and were soon freed after a trumped up plane hijacking, and the pursuant negotiations, with $9 million,” she said.