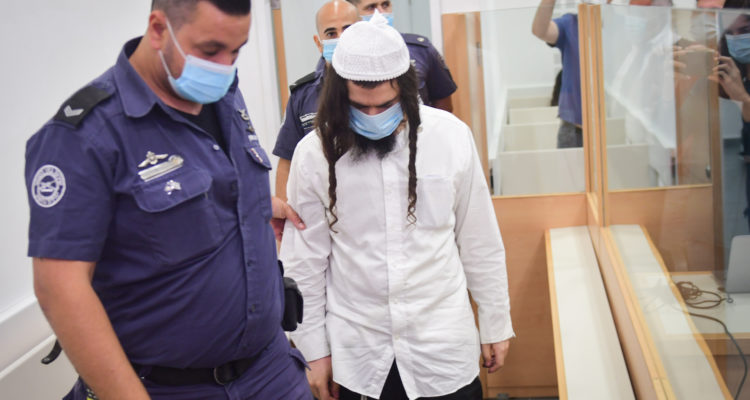 Are Israelis willing to deal with the implications of a contradiction-laden criminal case and demand that the justice system conduct a serious self-interrogation, essentially putting itself on trial?

Because of the many contradictions, listed below, it is difficult for much of the public to trust the verdict in the Amiram Ben-Uliel trial; he was found guilty of setting fire to a house in the Palestinian Arab town of Duma in 2015, causing the deaths of three members of one family and leaving a four-year-old boy orphaned and badly burned.

On Thursday, the Supreme Court rejected the latest appeal submitted by attorney Avigdor Feldman on behalf of Ben-Uliel, bringing him back into the news.

The Israeli public consistently stands against violence and terror, and if the terrorist is a Jew, that position does not change. If that is not clear to all, then just consider the overwhelmingly agonized reactions when the brutal murder of Mohammed Abu Khdeir by Jews came to light. The reaction to the disclosure of the Duma arson was similarly immediate: shock and horror.

Given the verdict, it makes sense that news reports refer to Ben-Uliel as a murderer and terrorist. However, when the story first broke, articles pointed out the possibility that, in spite of how it looked at first, because of the Hebrew graffiti on the wall, it was possibly not a Jewish crime. Therefore, contradictions that have not been sufficiently addressed render much of the public wary of fully trusting the outcome of the case.

Before listing the contradictions, none of which are being raised in the media at present, it is important to discuss the use of torture – enhanced interrogation – to produce the confessions upon which the conviction was based.

Feldman, a human rights lawyer who generally represents anti-Israel activists, took on this case of an ultra-Orthodox “hilltop youth” — nationlists who establish illegal outposts in Judea and Samaria — because of his concern with the use of torture in obtaining confessions. He was not trying to prove Ben-Uliel innocent but, rather, attempting to vacate the confessions. He lost.

Ben-Uliel maintained his silence for 17 days before the torture began. He had not seen a lawyer. On the 21st day, his captors would have been required to let him see legal counsel and they began the use of “enhanced interrogation” in these last few days. Finally, they got their confession.

I, in fact, was once questioned under caution because of a lie someone had told about me, and, while I knew that I had done nothing wrong, I shook throughout the interrogation and was not sure the police officer would believe me until I walked out of the station.

It is safe to say that torture is traumatic, especially for a 21-year-old man who had never been arrested before.  To have spent 17 days under arrest, cut off from the rest of the world, undergoing repeated interrogations with officers who were convinced of his guilt, was already traumatic. Add to that the torture, descriptions of which Feldman said he found difficult to read. The impact of that experience does not dissipate in 36 hours and perhaps not even in 36 weeks or 36 months, especially when these later confessions were given within the same environment and to the same people who had tortured him.

Why was a confession needed?

In Israel, enhanced interrogation is allowed only when an individual is deemed to be a “ticking bomb,” meaning that intelligence information has shown that this individual is part of a terrorist organization planning an imminent attack. But Ben-Uliel was deemed by the court not to be a member of a terrorist organization, and he certainly could not carry out an attack while in prison. This means that the only reason for the enhanced interrogation, in his case, was to force a man stubbornly sticking to his claims of innocence to say what they needed him to say.

Why did they need Ben-Uliel to confess? There was international pressure to find a culprit for this crime. Given the Hebrew graffiti, it was accepted that the perpetrator must be a Jew. Months later, with growing frustration at the lack of progress, Ben-Uliel and two minors were arrested. It has never been made clear what led to the arrest of these particular three people. But they had to be found guilty. It was important to show that Israel prosecutes Jewish murderers of Palestinian Arabs and not just Palestinian Arab terrorists.

In the end, one of the minors was found guilty of helping Ben-Uliel plan the attack and Uliel was found guilty of carrying it out. Shortly after their arrests, however, Internal Security Minister Gilad Erdan and Defense Minister Moshe Ya’alon both said there was insufficient evidence to prosecute.

But the fact that Ben-Uliel and his alleged accomplice were ultra-Orthodox hilltop youth — a group vilified by the elite leftist members of the Israeli population and leadership — may have made it appear the conviction would go unchallenged by the public. And this is true to some extent.

Were the court to have decided, in this latest appeal, that all confessions obtained through torture are inadmissible, the case would need to be retried. And given the contradictions listed below, a retrial would possibly exonerate Ben-Uliel.

Should that happen, the public would be exposed to a serious miscarriage of justice and the search for the real perpetrators of murder would have to be resumed in the now-cold case. It could result in suits being filed against those involved in the original interrogations and trial, not to mention an explosion of wrongful conviction cases added to the 21 out of 28 convictions retried since the establishment of the State of Israel that were found to be wrongful. Perhaps these are the reasons behind the latest rejection of the appeal.

On the other hand, if Ben-Uliel were to be found guilty in a more transparent re-trial, faith in the justice system would be restored and we could sleep well at night knowing that the man in jail really is guilty.

Look at the inconsistencies and contradictions reported in the media when the case broke and see what you think might be the truth. And remember – these are not necessarily facts but pieces of potential evidence that should be brought to a trial and substantiated or refuted under oath. Then we could say that justice has been done.

– There were several cases of arson in Duma before and after this particular one. It was common knowledge that arson was committed among the Palestinian Arab inter-clan conflicts rampant during that time.

– Initial eyewitness reports claimed there were either two or four arsonists and that they got away by car. Ben-Uliel was accused of working alone and being on foot.

– His wife said he was with her all night and his voice could be heard when a friend called at night – neither the wife nor the friend was called in to give statements. He could not have gone out after the phone call because from 5 a.m. he was looking after his daughter and would not have had time to commit the crime and get back home in time.

– The houses torched were deep in the town and not the more easily targeted buildings at the edge. How did he get into town, commit the crime, write two graffiti messages on walls — and get away without having been caught? And why did he not have anyone with him in case he was in danger? Analyst Martin Sherman of the Israel Institute of Strategic Students questions how a militarily untrained young man could have had the ability to carry out the attack on his own.

– An expert graphologist determined that the two graffiti messages, one of which was a specifically Chabad-type message rather than a nationalist one, were written by two different people and that Ben-Uliel was not one of them. Furthermore, Ben Uliel is not affiliated with the Chabad Movement. The writing style also suggested Arab calligraphy.

– The house of Ibrahim Dawabsha, a key witness for the defense, was set on fire, and it was believed to be in retaliation for his evidence that more than one person was involved in the crime.

Will people demand a search for the truth? Or will complacency leave questions unanswered and a young man condemned for a life in prison for what can, perhaps, be considered a trial of political expediency and one that had international import?