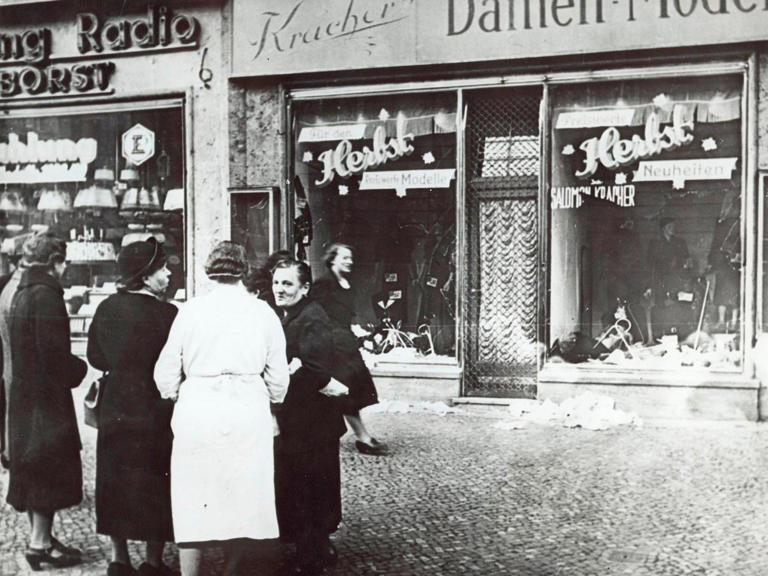 On November 9th 1938, mobs burned synagogues, destroyed Jewish homes and businesses, vandalized Jewish hospitals, orphanages and cemeteries, and dragged thousands of Jewish men, women and children into the streets, where they were beaten and humiliated. The Germans later called this night “Kristallnacht” – The Night of Broken Glass – because of the tons of shattered glass that scattered throughout German cities, after it had taken place. The Jews began to call that date the beginning of the Holocaust because of the tremendous violence, which started on that night and grew even more dreadful as time had passed. The cost of the broken window glass alone came to millions of Reichsmarks. The Reich confiscated any compensation claims that insurance companies paid to Jews. The rubble of ruined synagogues had to be cleared by the Jewish community. The Nazi government imposed a collective fine of one billion Reichsmarks (about $400 million in 1938) on the Jewish community. After assessing the fine, Hermann Göring remarked: “The swine won’t commit another murder. Incidentally…I would not like to be a Jew in Germany.”

On November 7, 1938, the Third Secretary of the German embassy in Paris, Ernst Von Rath, was murdered by Herschel Grynzpan, a 17 year old German-Jewish refugee. Herschel wanted to avenge his parent’s expulsion, together with 15,000 other Polish Jews from Germany to Zbonszym. The Nazis used the murder as an excuse to start the mobs and riots that began the “final solution,” the extermination of Jews. Herschel Grynszpan carried a revolver and thoughts of revenge with him as he walked through the streets of Paris on the morning of November 7, 1938. The 17-year-old German refugee had just learned that his Polish-Jewish parents, along with thousands of other Jews, had been herded into boxcars and deported from Germany. From the day Adolf Hitler rose to power in 1933, anti-Semitism had become encoded in the governmental policies of Nazi Germany. For years, Jews experienced state-sponsored discrimination and persecution, and Grynszpan had seen enough.

The young man who had emigrated to France two years earlier walked into the German Embassy on Rue de Lille in search of the German ambassador. When Grynszpan was informed that the ambassador was out on his daily walk, he was brought in to meet with diplomat Ernst vom Rath. Pulling out his revolver, Grynszpan fired five times at vom Rath and shouted, “You are a filthy kraut, and here, in the name of 12,000 persecuted Jews, is your document!”
Hitler sent his personal physicians to Paris to treat vom Rath, but two days later the diplomat died from his wounds. The Nazi regime found the murder to be a welcome excuse to launch a vast pogrom against the Jews living inside its borders. Until then, Nazi policies toward the Jews, such as boycotts and deportations, had been primarily nonviolent, but that all changed in the hours after vom Rath took his last breath.
The German government attempted to disguise the violence of those two days as a spontaneous protest on the part of the “Aryan” population. But, in reality, Kristallnacht was organized by the Nazi chiefs and their thugs with technical skill and precision. The Nazi chiefs commanded the Gestapo and the storm troopers to incite mob riots throughout Germany and Austria.
Kristallnacht marked the beginning of the plan, to rob the Jews of their possessions for the benefit of the Reich and then to sweep them forever from the German scene. Furthermore, thereafter, Jews had no place in the German economy, and no independent Jewish life was possible, with the dismissal of cultural and communal bodes and the banning of the Jewish press.
During the week after Kristallnacht, the Jewish Telegraphic Agency’s Berlin reporter called that night “The worst outbreak of anti-Jewish violence in modern German History.”
During Kristallnacht, over 1,100 synagogues were destroyed, as well as 7,500 Jewish businesses and countless Jewish homes. Several hundred Jews were killed and 30,000 wee arrested and sent to the concentration camps at Sachsenhausen, Buchenwald and Dachau, where thousands more died.
Today, many historians can trace a pattern of events, occurring before that night, that would suggest that such an atrocity was to happen. In 1933, when the Nazis took power, German anti-Semitism adopted quasi-legal forms. One of the new anti-Jewish forms of action, which had began with the Nuremberg laws of 1935, included the separation of the Jews from the daily structure of German life. The Jews, systematically, were deprived of their civil rights; they were isolated from the general populace through humiliating identification measures. The Nazis boycotted the Jewish shops and took away their jobs. Then they made the Jews declare the value of their possessions. The Civil Service and the police often arrested the Jews and forced them to sell their property for a pittance.
One may ask, how could the entire world stand by and allow such a disaster to occur? The fascist or authoritative regimes in Italy, Rumania, Hungary and Poland were governments who approved of this pogrom and wanted to use the pogrom as a case to make their own anti-Semitic policies stronger in their individual countries. The three Great Western powers – Great Britain, France and the United States – said the appropriate things but did nothing to save the Jews. Hitler, in the late 1930’s told the world to take the Jews but there was just no one willing to take them in. Even in our own country, President Roosevelt and his administration kept on expressing their shock over the terrible events which were occurring in Germany and Austria, but when it came time to act and help save the refugees by bringing them to the United States, the United States government refused and replied by saying that they have no intention to allow more immigrants to enter the United States.
Kristallnacht teaches us many things. Among them that we must remain vigilant and not permit even the smallest seed of anti-Semitism to take root.