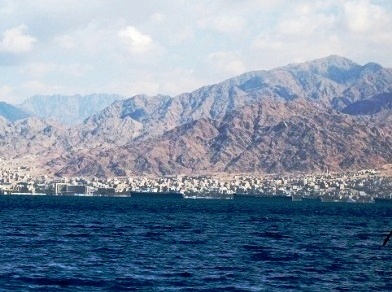 Usually, when war breaks out in Israel, I am right in the thick of things–missiles fly by my kitchen windows, my life is made chaotic and I can’t hear myself think it’s so noisy listening to the BOOM BOOMS.

That’s why, it was the strangest feeling for me being in Eilat on vacation when this past week’s war with Hamas broke out.

Here I was trying to relax in Eilat with my husband and our friends Meyer and Jeanette from Netanya.

In fact, I was so relaxed down here in Eilat, between the pool and the beach, the beach and the sunset, that I didn’t even have the slightest clue there was a war going on.

Believe it or not, I first learned of the war when Rhonda Spivak, editor of the Winnipeg Jewish Review called me from Canada on my cell phone late at night her time to see how I was. “I’m fine, we’re having a great time,” I said, telling her about the relaxing pool area in the hotel, with the enjoyable “happy hour.” “Here in Eilat every hour is happy hour,” I replied.

I finally got around to asking Rhonda why she was calling me.

She laughed saying that I wasn’t much of a wartime correspondent.

What do you mean I am not much of a war time correspondent? I said sensing she was getting at something or other that I had overlooked.

“Well, Orli Avior, I don’t mean to interrupt your happy hour but there’s a war going on in Southern Israel. In Ashkelon, where you live or are supposed to live people are in bomb shelters. Didn’t you know about it?”

“Oops, I missed that one,” I confessed. “Aren’t I entitled to miss one war in my life?”

Then Rhonda asked me whether I knew about the riots all week in Jordan over the price of fuel. Did you know about those? she said.

Orli, did you read in Bloomberg news that Jordan is so short of money that it can’t pay for the cargoes carried by two fuel ships docked in the port of Aqaba, according to Jordanian Prime Minister Abdullah Ensour?

I had no clue what she was talking about so I answered, “I feel for the Jordanian Prime Minister Abbi Dullah Hot’N Sour. (I hoped I was pronouncing that right). I am also short of money. Will need to go back to my room for money to pay for my cruise ship this evening.”

Rhonda then asked me if I knew that Jordan was suffering financially because Saudia Arabia hadn’t given it extensive foreign aid this year since it felt Jordan wasn’t backing the Syrian rebels strongly?

I had no knowledge of what she was talking about but I am a wartime correspondent, and I didn’t want to be caught slacking off so I replied “If am grabbing my binoculars right now, I can see from my Eilat hotel room past Aquaba right into Saudia Arabia from here. Everything looks good from here. Sunny and Clear. Over and out.”

Any thing else to report, Orli ? Rhonda asked.

“Yes, I went to the Dolphin Reef in Eilat and watched the trainers feed the Dolphins. The Dolphins also didn’t seem to know anything about the war, and had not changed their swimming routes in any way. After watching the Dolphins I also went into the relaxation pools and enjoyed water therapy. My only complaint is that my cell phone kept going off with all my friends who thought I was in Ashkelon calling me to see how I was. I’ve never been so exhausted in my life fielding all those calls! Who could relax with all those calls interfering. The only time I could escape them is when I climbed a mountain behind my hotel- I must not have had any cell phone reception there thankfully.”

Then Rhonda asked if I had noticed if there were any rockets being fired from the Sinai? The truth is that I hadn’t thought anything at all about the Sinai all week. I had been noticing the new Ice Rink and Mall in Eilat that is now complete. Kids can skate and there are two levels of shops and cafes around the rink.

But, I had to think about something to say about the Sinai since I am a wartime correspondent so I did my best. “I am just looking out at the Sinai now. Everything looks…er..ah.. rather dusty and dry. Over and out ”

[I was hoping that Rhonda wouldn’t notice that the answers I was giving her made things sound like I was a “a weather girl”, not a war time correspondent] But the truth is I hadn’t noticed anything unusual the whole time.

After a relaxing week I left Eilat but when I got back, Janette’s daughter who was picking us up at the airport reported that she had heard on the Israeli news that there were two big explosions in Eilat moments after we had left.

WHAT? How could I have missed them, I thought to myself. What kind of war time correspondent am I that I wasn’t even there for that! All week nothing to report and just when there is a big story I left the scene. I began thinking I had better watch it or I could be fired!

When I next spoke to Rhonda by phone, I told her that there were some sort of explosions in Eilat but I didn’t know anything more.

Most Israeli media hadn’t reported it, except for Ynet which had one line about it. But Rhonda found that Reuters had reported it.

“A number of town residents called to say they had heard an explosion. But after a sweep of the city nothing has so far been found. Police and the army are searching the hills around the city,” police spokesman Micky Rosenfeld told Reuters.

Palestinian terrorists have in the recent past fired rockets at Eilat, using Egypt’s Sinai desert as a launch site.

Eilat is thought to be well out of the range of any rocket in possession of Hamas or other Islamist terrorists in the Gaza Strip.

But who knows, maybe it did come from the Sinai in Egypt?

Shoot, I should have stayed in Eilat another week and if I climbed a few more mountains just maybe I would have found where those two rockets fell.

[Editor’s note: Orli Avior has now returned from Ashkelon and is back and forth in her safe room as sirens go off.

I have been asking myself why Israeli media has not reported widely on the explosions in Eilat.I have wondered why it hasn’t been reported in more outlets. Maybe becasue they haven’t determined for sure it was a rocket explosion. Or maybe if the Israeli government thinks that these are rockets that came from Egypt controlled Sinai, they are downplaying it since Egypt is supposed to be trying to broker a cease fire. I am not sure].