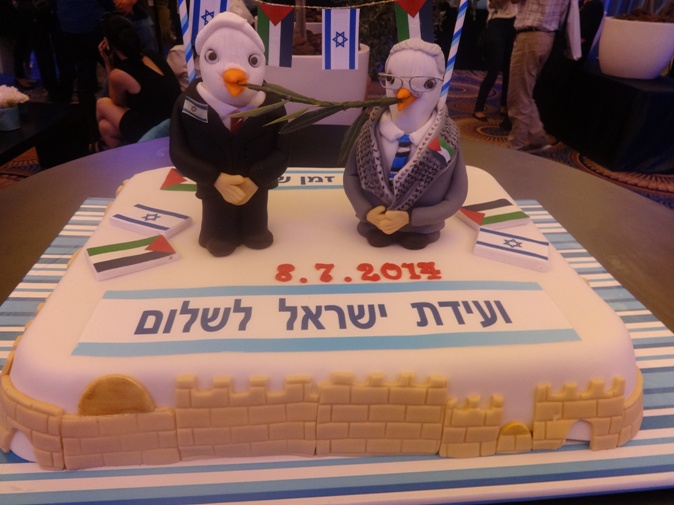 Before I begin describing what I encountered at the Ha’aretz Peace Conference, let me begin by explaining that some 25 years ago, at the age of 25 I co-founded the Winnipeg Chapter of the Canadian Friends of Peace Now. I did so at the time because I genuinely believed that a two state solution, an Israel and a demilitarized Palestinian state was the only possible long term solution to the Israeli-Palestinian conflict which would enable both peoples, Jews and Palestinians to realize their national aspirations. I was not a hawk, and believed that if it would really end the conflict, then Israel could go back to the ’67 lines with land swaps.

My own views began to shift to the right the more I went to Peace Conferences and spoke to Palestinians (whom I naturally assumed would be “moderate” if they took the trouble to attend peace conferences). I found that the overwhelming majority of Palestinians I spoke with were talking about a two state solution whereby there would be a Palestinian state in the West Bank and Gaza, and additionally a state called Israel to which 6 million Palestinian refugees and their descendants would return and eliminate the Jewish state—In other words, while I was talking about two states for two peoples, the Palestinians I met on the ground were talking about two Palestinian states, or in other words the elimination of the State of Israel. What made them “peaceniks’ was not their moderate views, but the fact that they were advocating this without directly advocating violence (or so it seemed).

With the above in mind, at the peace conference sponsored by the Ha’aretz newspaper on July 8, (the day that Hamas stared a war on Israel by firing rockets on Tel-Aviv), I made every effort I could to talk to any Palestinian I could find at the conference (all the high profile Palestinians cancelled attending) to see if I could find any genuine “two staters” There were very few Palestinians at the conference, and there is no question that among the several hundred Jews present, virtually all of them would have gone back to the 67 lines to end the conflict. In other words, the Jews at the conference, ( mostly Ashkenazi, liberal, secular, and many economically well off) were all genuinely two staters.

I met three teenage men (about age 17-19 ) at the Ha’aretz peace conference who were registered as delegates:-Mousa A, Ehsan A, and Majde K. They were, all Muslim Israeli Arabs who lived north of Netanya (I have their full names and contact info).They were very candid about their views of the conflict, and the lengthy conversation in Hebrew left me very discouraged.

Majde K said “I want the Jews [in Israel] to go to another country”, “The Jews can’t live here. The country belongs to us.” Both Ehsan and Mousa agreed.

When I asked Majde how it was that he proposed to get the Jews to leave the country, Mousa piped in that the best way to do this was to offer the Jews “money under the table” so that they would leave.

When I asked Majde what he proposed to do if the Jews couldn’t be bought off, he looked at the others and they looked back at him, and then Mousa said candidly: “Then, it’s a fight.” In other words, the bottom line for these three peace conference delegates was that they would go to war to kick out the Jews -all of the Jews-from the land. I asked if any Jews would be allowed to stay, and the answer was an unequivocal “no.”

Majde continued that he admired the Jews for having a democracy and this democracy is “a good thing” and once “we kick out all the Jews, we Palestinians should have a democracy here just like there is in Israel now.” Majde said “There will be a thawra (revolution) here.” I asked Majde if he had any Jewish friends and he answered “yes, but I don’t talk about this with them.”

At this point in the conversation, I began to wonder why these three extremists were delegates to a peace conference! I asked them how they got there and they explained that they were their because their boss, an Israeli Arab was going to the conference and signed them up as delegates because he had a “bungee jumping’ business and offered other nature, and environmental tours and most of his clients were Jews so he thought it would be good for his business to go to the conference. There were in total about 10 Israeli Arabs in their group, and I tried to talk to a couple of the women who were wearing hijabs but they wouldn’t talk to me. I noticed however that none of the ten appeared to be going to any of the conference sessions, but were enjoying spending time in the lobby with conference food and exploring the five star hotel the conference was in.

I wanted to understand more about the families of these three young men. One of them told me his father was a doctor who worked in a hospital in Haifa, and the father wanted to stay in Israel even if a Palestinian state were to arise in the West Bank and Gaza, since Israel had been good to him and had given him his livelihood. But his son treated his father as a traitor: “My father likes the Jews more than the Arabs.” Another one of these youths, whose father owns a humus restaurant where I was invited to come eat humus told me his father accepts Israel as a state and wants to live in it. He complained bitterly about his father’s acceptance of Israel saying “My father loves the Jews more than Arabs.”

What disturbed me most was that it appeared that these three young men were more radical than their fathers. I can only hope that their views may moderate with time, but that may be a naive hope on my part.

Next, at the conference I met a middle aged Israeli Arab from the Galil and asked him about what brought him to the conference. The conversation was in Hebrew and he did not realize I was a reporter. I asked him if he believed in a two state solution. He answered, “I am not here to get into politics.” I responded. “What do you mean? This is a peace conference. It’s all about politics.” He responded that he was at the conference because his company tried to employ Israeli Arabs from the North and he was there since it was a good business opportunity for him. He gave me his card which I have, but after learning I was a reporter he asked me not to use his name in anything I wrote. I got the impression he wouldn’t want anyone of his Arab friends to know he was even at the conference.

I met another Muslim Arab man Walid from Jerusalem, but when I asked him if he believed in a two state solution, he was not able to answer the question, since it was “very complicated.”

There were very few Arabs at the conference and of the five Arabs above I spoke to, not one, in my opinion, was committed to a two state solution. (In fact, most were there for business reasons.)

It was only at Ben-Gurion airport leaving Israel that I met an Israel Arab man in his twenties from an Arab village who I believe would accept a two state solution. He said all he wanted was “quiet,” so that people could go about living their daily lives and he was fine with living in the State of Israel. He said his father voted for the Labour party and he wanted to be Israeli.