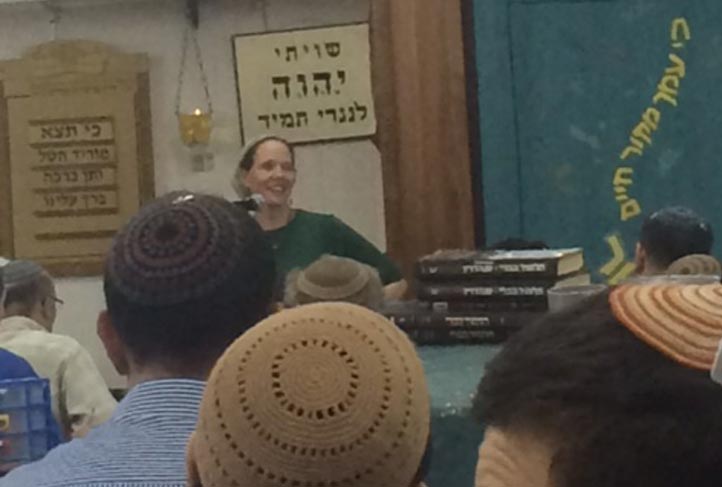 We just returned from the special evening of “Remembering and Continuing,” a program for the entire student body of 350+ boys, Rabbis and parents at Makor Chaim Yeshiva in Kfar Etzion. The yeshiva was not so well known until June 12, 2014, when Gil Ad Shayer, Naftali Frankel, 11th graders at the yeshiva were murdered by Hamas terrorists in the Gush Etzion area, along with Eyal Yifrach, a student from Shavei Hebron, who joined together on their last ride to their deaths. The international Jewish community now knows the name of this yeshiva, which is led by Rav Adin Even Yisrael (Steinsaltz).

The other boys returned a week ago to start Elul with the reunification of the students who survived the early days of ‘search’ for the boys until their funerals, 18 days later. I could tell by the incredible number of cars in Kfar Etzion that this evening would be attended beyond full capacity by all.

We took our seats in the Beit Midrash next to our sons, as their 12th grade classmates were sitting close to the Rabbis and the “Aron Kodesh”. We assembled as one of their teachers began Mincha as the opening program. We had just finished “Ashrei” when Avi Frankel, Naftali’s father walked into the Beit Midrash. He sat one row away from my son and I. I started the silent “Amidah” and had lost my concentration, as I watched Avi Frankel daven with his eyes closed and all of course by heart. The Beit Midrash began to fill up as the chazan began the repetition of the “Amidah.” The seat next to Avi Frankel was empty, and my son told me that Naftali sat there until June 12, 2014.

“Aleinu” was mumbled as the entire Beit Midrash realized that Naftali’s parents were here with us. We finished the Mincha as the mourners said their kaddish, I watched Avi Frankel, who closed his eyes and did not say the kaddish which he is ‘free’ from saying after the 30 days from the burial of his son, Naftali. He was staring and with his eyes closed, perhaps, he was for sure thinking of Naftali.

We took our seats and many parents and students were standing as there was no room to move or stand. As we were trying to relax and start the program, Rachel Frankel walked into the Beit Midrash and sat next to her husband. We stared out of respect at this incredible couple who came tonight to give chizuk to all of us as they sat on the Beit Midrash ‘bench’ without their son, Naftali, z’l.

The small klezmer type band of students began to play a mix of somber and simple music which stopped as Rav Adin Even Yisrael (Steinsaltz) walked into the Beit Midrash. We all stood for this ‘Gadol Hador’ as he walked to the front of the Beit Midrash, first stopping to say hello to the Frankels. The three of the stood together and exchanged thoughts and greetings as the music began again.

Fortunately, I had my windshield wiping sunglasses in my pocket, even though it was 7 30pm and dark outside. The atmosphere was electrifying to say the least.

Rav Steinsaltz spoke for 45minutes and accentuated the ”shvarim” broken notes of the shofar which begin and end with the strong “Tekiah” each morning of Elul until again it is repeated 100 x on Rosh Hashana’s days. The broken people of Am Yisrael are supported by the strength of the solid tekias. He has so much to say that it was impossible to keep track of this amazing human being and prolific author.

More songs, more swaying, more guitars and accordions and more darbukas of music permeated the Beit Midrash. Rav Dov Zinger, the Rosh Yeshiva began to speak about what and why was this evening which he called to “Remember and to Continue.” He spoke briefly and then called up Rachel Frankel to speak to us.

There was total silence as the entire Beit Midrash stood up again for her………not a Rosh Yeshiva, but a heroine and Jewish leader of today for Am Yisrael. Rachel smiled and joked and teared, but brought down the entire ‘house’ or Beit Midrash after 2 minutes! Attached is an audio of what she said, not too clear but her enthusiasm and chizuk of the lives of Naftali, Gil Ad, and Eyal were incredible to hear for us.

Rachel thanked the classmates, the rabbaim, the staff, and am yisrael for becoming her new family. She gave two or three divrei Torah of life with sadness and simcha. Rachel talked about how hard and yet so honored for her and her husband to sit on the ‘bench’ of Naftali. We thought it was over, but then Daniel, a classmate of Naftali came up to Rachel and gave her Naftali’s English book which Naftali had left in Daniel’s area of the ‘bentch’ and table.

Rachel was strong and then lost it for a minute as she began to explain that during the days of search, Rav Steinsaltz promised her that if Naftali would come back safe and alive, that he would be the mesader kiddushin one day in a marriage of Naftali and his zivug in a few years. “This shtar’ was not applicable after the ”shtar” ptira..(death certificate).

We heard one more speech from an IDF officer who was in the ‘search’ team for Naftali et al, and was then sent to Gaza for 2 weeks of war. By this time, it was impossible to function, breathe, or sit any more tonight.

Rachel hugged the mothers of the other 12th grade students. Avi Frankel, together with Rav teinsaltz and Rav Zinger shook our hands with an embrace of us, the fathers, of the ‘surviving lassmates.’

We did not need a shofar tonight, we heard the trumpets of the giborim,  of our 3 murdered boys…………….which is almost 3 months since the day of infamy.

Wishing all of you a shana tova.