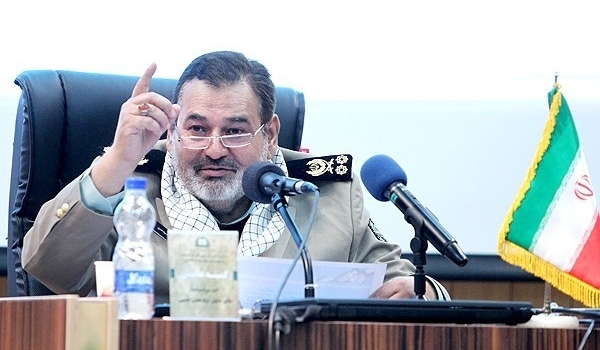 TEHRAN (FNA)- Chief of Staff of the Iranian Armed Forces Major General Hassan Firouzabadi in a message to the country’s team of negotiators on Sunday mentioned specific redlines that should receive due attention in a final nuclear deal with the six world powers.

In his message the General appreciated Iranian Foreign Minister Mohammad Javad Zarif and his negotiating team, describing Zarif as a well-experienced commander on the scene of diplomacy and foreign policy, but warned him to take good care not to be trapped in the political and nuclear talks with the US.

He reminded the Supreme Leader’s recent order to the Iranian military and security officials for blocking any possible pathway that enemies could take to infiltrate “Iran’s defense and security affairs under the pretext of nuclear supervision and inspection”.

“Iranian military officials are not allowed to let the foreigners go through the country’s security-defense shield and fence,” the General said reminding the recent remarks of Iranian Leader Ayatollah Seyed Ali Khamenei. “Iran’s military officials are not at all allowed to stop the country’s defense development and progress on the pretext of supervision and inspection and the country’s defense development and capabilities should not be harmed in the talks.”

“Our support for our brothers in the resistance (front) in different places should not be undermined in the talks at all,” he added.

Firouzabadi further reminded the United States’ bad record in complying with its undertakings and commitments as well as its security, military and intelligence plots against Iran in the past century, and said no one can trust such a state, and Iran’s national security issues should remain safe and immune from such an opponent, reiterating that a final deal should be a comprehensive one envisaging the right for Iran to rapidly reverse its measures in case the opposite side refrains from holding up its end of the bargain.

“Iran’s national security necessitates guaranteed irreversibility of the sanctions removal and this is no issue for bargaining, trade or compromise,” the Iranian chief of staff reiterated.

The General said the final deal should be drafted in a way that if the opposite side violates the terms of the agreement, Iran will not be required to continue fulfilling its undertakings.

He also warned against the alleged rift between the US administration and the Congress and its dire impacts on any final nuclear deal with Iran, saying it would be an unforgivable mistake to open Iran’s security rights to “an administration that cannot and/or is not allowed to comply with its undertakings or actions and attitudes beyond its will affect the agreements”.

The Iranian chief of staff reiterated that all the UN Security Council sanctions resolutions against Iran should be transparently and decisively annulled in one single resolution that would be binding for all the UN Security Council members without any condition, reiterating that such a resolution should also include the necessary assurances and guarantees that it would not be violated or dropped under any kind of condition.

He further warned that the International Atomic Energy Agency (IAEA) should not at all be entitled in a final nuclear deal to the right to visit Iran’s sensitive centers and areas for any purpose other than nuclear enrichment, or without corroborative evidence, proof and documents and only based on suspicion and void excuses and political incentives and provocation, adding that the IAEA should not be granted any exceptional authority and power to supervise and inspect Iran’s nuclear activities and centers (beyond the rules and regulations stated in its statute and in the NPT).

He said a final deal should not at all limit Iran in transferring its nuclear know-how and technology to other countries or in selecting and choosing customers for its nuclear products such as heavy water, uranium products, reactor construction and operation, mine exploration know-how and services and other related technologies or in setting up consortiums, adding that Iran should only be required to conduct all such activities on the basis of the NPT rules and regulations, and a final deal “should not necessitate it to receive the consent of the Group 5+1 (the US, Britain, France, China and Russia plus Germany) in advance”.

The chief of staff also stressed that the six world powers should also undertake in a final deal to accompany Iran in its nuclear disarmament efforts in the region and pave the ground for international inspection of the centers of the nuclear armed states and dismantlement of such nuclear weapons based on safeguard agreements.

Meantime, the General stressed that “dismantlement of Iran’s nuclear infrastructures (i.e. centrifuges) should be reciprocated with a guaranteed removal of the sanctions structure by the G5+1”, adding that “in case the West insists on suspending and not terminating the sanctions, then the Islamic Republic of Iran should only undertake to fulfill all its agreements over restricting its nuclear operations – including (the number of) its working centrifuges, enrichment grade, research and development of centrifuge machines and reactors, including the Arak (Heavy Water) reactor, and change in the application of Fordow enrichment center – merely in the form of suspension”.

Firouzabadi’s remarks came as Iranian Deputy Foreign Minister Seyed Abbas Araqchi said Iran and the G5+1 are resolved to finish the drafting of a comprehensive nuclear deal in the next few days.

Araqchi, who is Iran’s deputy lead negotiator, said that drafting of the final accord started in New York on Thursday along with EU Foreign Policy Deputy Chief Helga Schmidt, who represented the G5+1in the sessions.

“We hope to reach a draft accord in next few days; though being a difficult task, it will serve absolutely as the first draft, being full of differential points, about which decisions should be made later on,” Araqchi pointed out.

He said the draft has a series of appendixes on which experts have also started work and details of the documents will be discussed as well.

“Our goal is to attain an early draft and we will spend as many days necessary for the job in New York,” Araqchi further added.

Also, Hamid Baeedinejad, a ranking member of the Iranian team of nuclear negotiators and a foreign ministry director general, said on Sunday that Tehran and the six world powers (the US, Russia, China, France and Britain plus Germany) will continue drafting a final nuclear agreement in the coming days.

“The meetings for drafting the text of the nuclear understanding are being held day and night and will continue in the current (Iranian) week (which ends on Friday),” Baeedinejad said on his Instagram page on Sunday.

He said that the negotiations on drafting a final deal are held at the level of political directors and experts of Iran and the Group 5+1.

Baeedinejad explained about the method used for reaching a single text on every issues during the talks, and said that the two sides first present their written proposals and in some cases use a video projector to elaborate on them and then both sides’ texts are modified after long discussions until a single text that is agreed by all sides comes out.

“Those issued that are not agreed upon after discussions will be left in parentheses for further talks,” he added.