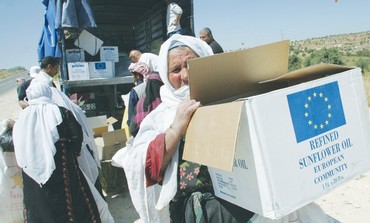 The United Nations Relief and Works Agency (UNRWA) serves five million descendants of the Arab refugees from the 1948 Arab-Israeli War of Independence, who still subsist in refugee conditions, under the premise of the “right of return” – by force of arms – to Arab villages inside Israel that existed before 1948.

UNRWA declares itself to be “one of the largest United Nations programs, with 30,000 personnel working across five areas of operations.” UNRWA manages the education of 492,000 students, who are indoctrinated with the idea that the “right of return” to what is now Israel is the goal for which they must live and die, a recurring theme in the official Palestinian Authority textbooks used in UNRWA schools.

It is an ongoing recipe for disaster. This is one of the greatest human rights tragedies of the 21st century. UNRWA perpetuates stateless status of refugees and their descendants, reinforcing a life of limbo and despair.

The UNRWA Reform Initiative (U.R.I.) was launched by The Center for Near East Policy Research, which has been conducting news investigations and producing films since 1987. Our continued focus remains on pushing policy change at UNRWA, The United Nations Relief and Works Agency.[1] It is understood that the Arab-Israeli conflict is nowhere near an end, however, the UNRWA Reform Initiative’s objective is to put an end to the humanitarian crisis facing descendants of Arab refugees from 1948.

In the recent 2014 war with Hamas, during a regular inspection, 20 missiles were found in an UNRWA school,[2] making this the second account of weapons found in UNRWA operated schools. “‘UNRWA schools were established to educate children in Gaza, but instead they are providing a hiding place for rockets meant to kill children in Israel,’“ said Israeli Foreign Minister Avigdor Lieberman, who also slammed the world body for returning the missiles found in UNRWA schools back to Hamas.

Yet another account of rockets  being found in an UNRWA school in the Gaza Strip, making this the third account of weapons founds in UNRWA operated schools. Israel has repeatedly stated that it’s has been fired on from around UNRWA schools and considering UNRWA admits the presence of rockets in its facilities, it’s hard to deny the Israeli claim.

The United Nations cannot change UNRWA programs unassisted. UNRWA operates under the assistance of 38 donor nations, who could use their financial power to request that UNRWA reforms their programs and curriculum to rightfully reflect their slogan of “Peace Starts Here” and start to put peace and reconciliation on their agenda.

The agenda of U.R.I. is to petition legislators of all donor nations to ask that UNRWA funding be predicated on a change in UNRWA policy. In reality, every citizen of every donor nation can take the initiative to reform UNRWA, by asking each respective legislature to require that UNRWA: Not use textbooks or teachers that encourage children to engage in acts of war, stop support for designated foreign terrorist entities such as Hamas, cease promotion of the “right of return” through “armed struggle,  adopt internationally accepted UNHCR definitions of refugee status and not to bequeath refugee status on descendants of refugees from 66 years ago.

We have filmed UNRWA students in Jerusalem and throughout the region, who openly speak about how UNRWA “education” inspires them to kill Jews. Our most recent film released on May 27th, will now be shown at legislative bodies: ‘The UNRWA Road to Terror: Palestinian Classroom Incitement,’ which portrays war education that has no place in a United Nations facility.

Our agency is preparing a detailed guide for legislative bodies to learn about new textbooks produced by the Palestinian Authority for use in the UNRWA schools. Elected officials of donor nations will listen.

At a time of deadlock in political negotiations between Israel and the Palestinian Authority, the donor nations can use their leverage to find a solution to the humanitarian plight of the refugees. Instead of just throwing money at UNRWA, donors could advance policies that could improve living conditions of UNRWA refugee residents and offer a realistic humanitarian alternative to the current “refugee status in perpetuity” which fosters a “right of return” mantra that UNRWA currently drums into the minds of half a million UNRWA students.

In that context, the donor nations could address six policy challenges, which could guide a new way of UNRWA policy reform:

The Center for Near East Policy Research seeks sponsorship to conduct UNRWA policy reform briefings at those legislative bodies that donate to UNRWA. Our UNRWA policy experts are as follows:

Please consider this most important initiative as a fundamental solution to the plight of Palestinian refugees and a means to an end of the Arab-Israeli conflict. All donor nations have an opportunity to address a pressing humanitarian issue that can be solved.

To lend your support to the UNRWA Reform Initiative: