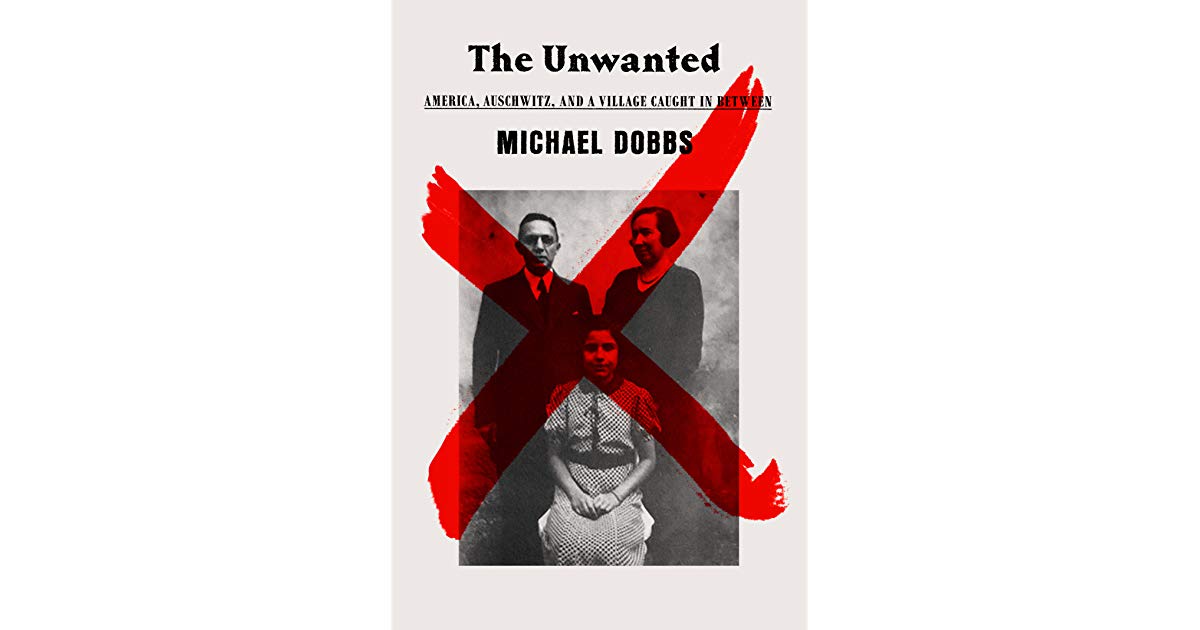 Michael Dobbs’ “The Unwanted: America, Auschwitz, and a Village Caught in Between” is the story of the Jews of Kippenheim, an obscure village of 1,800 residents, located in the Baden region of southwest Germany, where Jews had lived since the 17th century. After Kristallnacht, which began on the night of Wednesday, November 9, 1938, and ended the next day, every Kippenheim-Jewish family (no more than 150 individuals) attempted to seek refuge in the United States.

Between the late evening hours of November 9, and the early morning of the 10th, the rioters destroyed and firebombed 267 synagogues throughout Germany, Austria and the Sudetenland, leaving many of them burning throughout the night in full view of the public and local firefighters, who had received orders to intervene only to prevent flames from spreading to nearby buildings. The shop windows of an estimated 7,500 Jewish-owned commercial establishments were smashed and their wares looted. Approximately 26,000 Jews were incarcerated in concentration camps, and almost 100 were murdered. Those who obtained release from the camps were told it was on condition that they begin the process of emigration from Germany. The goal of Kristallnacht was to compel the Jews to leave.

By the time the U.S. Consulate General in Stuttgart, which served half the country, opened on Saturday morning, November 12, thousands of Jews representing every section of Germany were waiting outside to obtain visas to the U.S. The panicky crowd included the Kempinskis, Wertheims and Rosenthals, three of the oldest and most prominent families in Germany.

Like all Jews who had been picked up during Kristallnacht, the Jewish men and boys from Kippenheim, who had been sent to Dachau and managed to survive the torture, freezing cold and sleep deprivation, arrived home dazed and emaciated. Traumatized by the horrors they had experienced, they and their families resolved to leave Germany as soon as they could find a country prepared to admit them.

As a first step, they were forced to sell their businesses and property. As a result of Nazi decrees, taxes and restrictions against Jews, even those who had once been affluent were reduced to indigency.

Even before Kristallnacht, the uptick in the number of anti-Jewish incidents had been prompting Jews to try to leave Germany. Beginning in 1933, Jews who were taken to Dachau could be let free on condition they leave the country. In the 12 months ending in June 1938, 22,000 Jews applied for visas to leave Germany and enter the U.S. Of these, 14,000 were rejected out of hand and never given an appointment because they did not have the proper documentation. Another 1,200 Jews were declined an interview because of medical reasons or unacceptable affidavits. The remaining 6,800 presumably qualified applicants were forced to wait two, often three, years for an appointment with the consulate.

Widespread anti-Semitism, nativism and a policy of “America First” were the primary forces behind the campaign to exclude Jews. The very word “refugee,” which implied “alien” to the bureaucrats and “secret agent” to the military, was immorally and dishonestly used to rationalize barring Jews. To make matters worse, many Americans, including some members of Congress, believed Jews from Eastern Europe were radicals, perhaps even Communists, who would become a “fifth column” in the US.

To ensure that Jews would not have an easy time finding refuge in the U.S., then-Assistant Secretary of State Breckinridge Long informed his fellow assistant secretary of state, Adolf A. Berl, as well as James Dunn, who served as State Department advisor on political relations, that the department would be able to “delay and effectively stop for a temporary period of indefinite length” the entry of Jewish immigrants to the U.S. This could be accomplished, he said, by “simply advising our Consul to put every obstacle in the way and to resort to various administrative advices [sic] which would postpone the granting of visas.”

This was not at all farfetched. Each American consul general throughout the world had far-reaching latitude in determining eligibility of those who applied to enter the U.S. Using limitations provided by the LPC (“Likely to become a Public Charge”) clause of the 1917 Immigration Act, the consul could deny candidates entry by arbitrarily deciding that they might become reliant on the U.S. government for subsistence.

There were other ways to keep applicants for visas from entering. Ill health could prevent an otherwise eligible applicant from being granted a visa. Before 1930, the LPC clause was used primarily to prohibit the mentally unstable and/or chronically ill from entering the U.S.

All these forces coalesced to form the difficulties encountered by the Jews of Kippenheim who had to cope as well with personal decisions that could influence their fate: Should the family try to travel together, or should the children be separated from their parents? What about the elderly members of the family who might not be able to travel on their own or whose age and ill health made receiving a visa impossible?

By the end of the war, 31 Jews from Kippenheim had died from Nazi oppression, including those murdered in internment camps or at Auschwitz. Some Kippenheim Jews, however, eventually immigrated to the US. For example, in 1939, Freye and Ludwig Valfer managed to secure passage on the ill-fated MS (Motorschiff) St. Louis, which Dobbs describes as “the symbol of international, particularly American, indifference to the tragedy of German Jews.” After spending five weeks at sea, the ship and its 907 passengers, who had been denied entry to Cuba, the U.S. and Canada, landed back in Europe at the Port of Antwerp. From Belgium, the Valfers were taken to their family in England. Then-British Prime Minister Neville Chamberlain had agreed to take 288 (32%) of the passengers. Smaller percentages of the passengers were accepted by France, Belgium and the Netherlands, countries that would be overrun by the Nazis in the months and years to come. It is estimated that more than 250 of the St. Louis’s passengers were eventually murdered by the Nazis. The Valfers managed to reach the U.S. in 1940.

In 1937, months before Kristallnacht, Hugo Wachenheimer had pleaded with a cousin in Chicago to sponsor the immigration of the Wachenheimer family to the U.S., a request the Chicago cousin was unable to fulfill owing to the economic depression throughout America. Upon his release from Dachau after Kristallnacht, Hugo Wachenheimer and his wife decided to send their daughter, Hedy, to England on the Kindertransport, a series of rescue efforts that brought thousands of refugee Jewish children to Great Britain from Nazi Germany between 1938 and 1940.

The Wertheimers, the wealthiest Jewish family in Kippenheim before the Nazis, managed to leave for the U.S. after Kristallnacht, but they left penniless. They had been forced to pay penalties amounting to 90,000 Reichmarks, a sum equal to what an average German could expect to earn over a 20-year period.

In “The Unwanted,” Dobbs, a seasoned reporter for The Washington Post, has made an important contribution to academic and popular understanding of the Shoah. The gut-wrenching experiences of the Jews of Kippenheim provide readers with an appreciation of the problems and dilemmas faced by victims as the Nazis unleashed their assault. Dobbs establishes the role played by President Franklin D. Roosevelt in the refugee crisis, the motivation of the U.S. State Department for keeping Jews out of the country and the fears and concerns of the American public at the very idea of admitting European Jews, who were considered enemy aliens.

Dr.Alex Grobman, a Hebrew University-trained historian, is senior resident scholar at the John C. Danforth Society and a member of the Council of Scholars for Peace in the Middle East. Susan Rosenbluth is the editor and publisher of TheJewishVoiceAndOpinion, an online magazine.