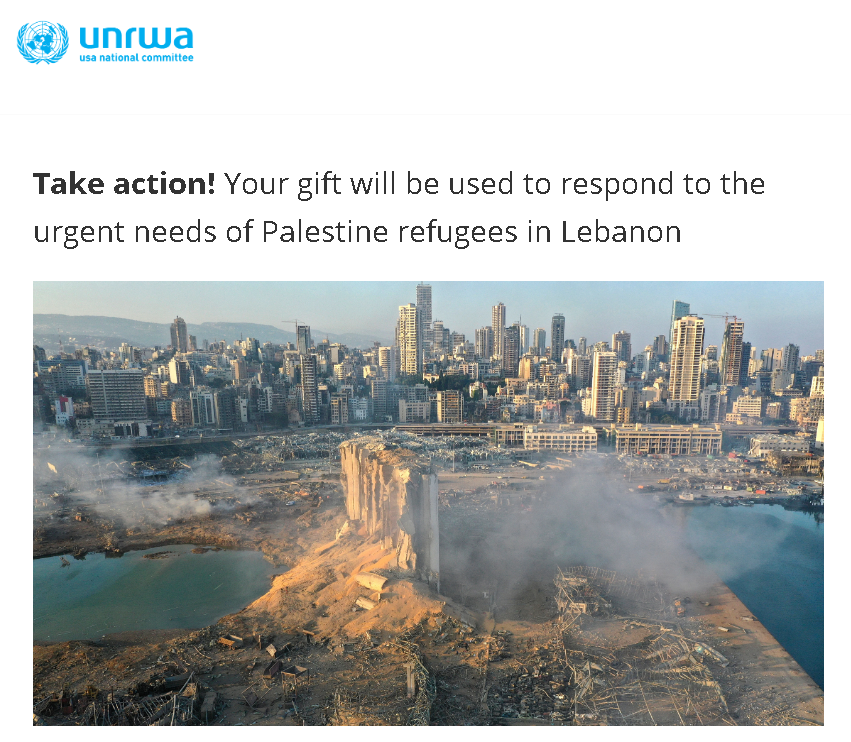 From a fundraising email from UNRWA-USA:

On Tuesday, a massive explosion in Lebanon tragically destroyed or damaged nearly half the capital city of Beirut, left at least 137 dead, thousands injured, and reportedly 300,000 homeless.
Before the blast, this tiny, famously-resilient country, which hosts more refugees per capita than any country worldwide, has been in the midst of a severe economic and financial crisis, while facing a growing number of COVID-19 cases, and an ongoing political deadlock.
Our hearts are with everyone living in Lebanon and with the support of UNRWA USA donors, like you, will provide relief for the population the Agency is mandated to serve — nearly half a million Palestine refugees who, like their Lebanese hosts, are living day by day under very difficult and worsening conditions.
Will you help provide refugees in Lebanon with immediate relief?

The closest UNRWA Palestinian camp (Shatila) is not near where any of the damage from the blasts were.

So if you want to help the Lebanese victims of the blast, UNRWA is not where you should send your money.

UNRWA-USA prefers that you don’t realize that. It is using the explosion as a means to raise money for their own purposes.

Worse, they continue to lie about “nearly half a million Palestine refugees” in Lebanon when there are in fact less than 175,000 living there according to a 2017 census.

A real charity doesn’t need to mislead potential donors. But UNRWA-USA relies on antisemitism, hate and lies to get donations.