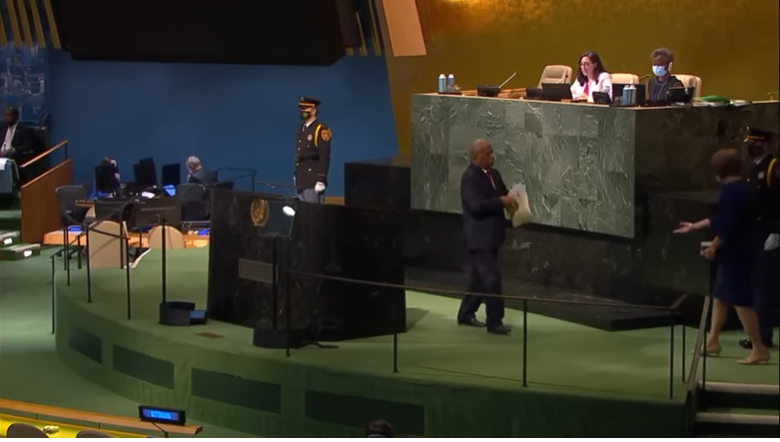 The president of the Palestinian Authority always fails to impress at the annual United Nations General Assembly forum. This year, he outdid himself in spectacular fashion, showcasing why there is no chance for peace anytime soon.

The 48 minute ramble was a disgrace from beginning to end. It is not worth a detailed review of the spouted delusions, but a summary is important to consider the mental and emotional state of this restless people. In short, Abbas believes the world is stuck with him in 1947; deems the Oslo Accords signed between Israel and the PA dead; considers Israelis as racist terrorists; and glorifies terrorists openly.

Abbas said that Israel has been colonizing Palestine for 75 years, since its very founding. He built on his term for Israel of a “painful historic settlement“, illegal as far as he is concerned for the past 100 years, not only since 1967.

He demanded that the United States, the United Kingdom and Israel apologize for the 1917 Balfour Declaration, the 1922 Mandate of Palestine, and the entire Zionist enterprise. He put it forward as an “official request” for the “major crime” and sought remedy and compensation.

Abbas also asked the entire UN to enforce Resolution 181 (@25:30). That resolution was the partition plan put forward in November 1947, which was accepted by Zionists but rejected by the entire Arab world, opting instead for war to destroy the Jews. Abbas said with a pointed finger, “Resolution 181 which you have adopted. Resolution 181 is the resolution that we want to be implemented. We want you to implement Resolution 181.”

It boggles the mind how the party which rejected the resolution – 75 years ago! – launched a war which killed one percent of the Israeli population – just a few years after the European Holocaust! – can somehow state that it has changed his mind. If the Arabs had known then that they’d lose the war and more territory, they might have accepted the plan.

Should Abbas figure out how to bring back the thousands of Jews murdered by Arabs over the past 75 years, I’m sure Israel would agree to go back to the borders proposed by the UN in 1947.

Abbas made clear that he considers the Oslo Accords of 1993 (and 1995) to be dead, as he mistakenly believes that Israel tramples on the accords and only the Palestinians abide by them.

Somehow the multi-year 2000-2004 intifada-terrorism didn’t register in Abbas’ memory. The several wars from Hamas since the terrorist-political group took over Gaza, with over 20,000 rockets fired into Israel, did not trample on the accords. Israel giving the PA Areas A and B and the Gaza Strip was completely ignored.

Did Abbas even read the accords? Nowhere does it say that Israel cannot build homes for Jews in Area C. It says exactly the opposite, that Israel has sole control of the region until it gives more territory to the PA.

One of the conditions of the accords was that the PA would not seek recognition at any UN bodies – which it nevertheless did. Abbas said that the PA will now seek admission to even more organizations.

If Abbas truly wants to end the relationship with Israel established with the Accords, he must realize that he is inviting Israel to take back all of the land that was given to the PA under those same agreements.

Abbas attacked Israel at 12:26, saying “Israel is enacting racist laws, consecrating the apartheid regime. Yes, apartheid, and if they do not like the appellation, this is the truth. They are an apartheid regime.” It was quite a comment, after Abbas had just said at 7:43 of the speech that “Israel did not leave us any land on which we can establish an independent state, in the frame of its frantic expansion. Where will our people live in freedom and dignity? Where can we build our independent state that will live in peace with its neighbors? We want to live in peace with them, with Israel. The settlements unfortunately constitute 751,000 [Jews], or 25% of the total population. 25 percent in the West Bank. The Palestinian land which remains for us. Israel is killing our people with impunity.”

Doesn’t Abbas realize that 26% of Israel’s population is not Jewish? If he believes that so many Jews possibly living in a new Palestinian State prevents Arabs from living in freedom and dignity, how does he possibly suggest Israel take in millions of Arab refugees when the country is only 74% Jewish now? How does he accuse Israel of being an apartheid regime when so many Arabs have full citizenship? Does Abbas blush at his hypocrisy as he demands a new country free of Jews and has existing laws against selling any land to Jews?

To make sure that the entire world and not just Israel was disgusted by his charges, Abbas doubled down on his heinous comment of a few weeks ago in Berlin, Germany when he accused Israel of committing “50 Holocausts” against Palestinians. At 16:30 of his rant Abbas said that “Israel has committed more than 50 massacres since 1948 until today.” The disgusting charge was clearly intended to simultaneously satisfy his Palestinian Arab constituents and repulse the civilized world.

After the long an rambling tirade meant to insult Israel in every manner possible, Abbas wrapped up his speech glorifying Arabs who killed Israelis, and promised that the Palestinian Authority will forever support the terrorists’ families.

For the last seven minutes of his speech, starting at 41:30, Abbas declared that no foreign body can dictate anything to the PA and they will do whatever they choose. (This comment, after demanding the UN and other countries place pressure on Israel.) He used that lead-in to say that he supports the martyrs and prisoners who are Palestinian heroes. They will get the full support of the PA, in the much criticized “pay-to-slay” program, which the world has rightly condemned as funding terror.

Abbas flipped the bird to the world and said he didn’t care.

Abbas specifically singled out Nasser Abu Hamid as a “martyr” and “a hero” several times. Hamid was convicted in 1990 by Israel of killing five people but he was released as part of the Oslo Accords. In the Second Intifada-terrorism wave, Hamid began killing again. He confessed to killing seven people in five attacks between 2000 and 2002, including the infamous lynching and desecration of the bodies of IDF Corporal Vadim Nurzhitz and Yossi Avrahami during the Ramallah Lynching in October 2000.

Abbas called this murderer a “hero” to the Palestinian people over and again.

Mahmoud Abbas demonstrated to the world his intransigence, hypocrisy, insanity, and consequently, why there is no peace with Israel. The Arab world has grown tired of him and his cause, disavowing the terrorism that he and the Iranian regime support, and are beginning to deepen their countries’ relationships with Israel.