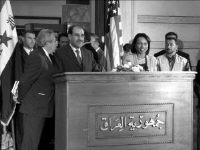 Jerusalem – United States Secretary of State Condoleeza Rice is scheduled to meet with Fatah, the parent organization of the Al Aksa Martyrs Brigade, which the U.S. State Department placed on the list of Foreign Terrorist Organizations on March 27, 2002, and which remains on the official list of terrorist organizations on the U.S. government’s terror “watch list.”

An American government official was asked whether the U.S. government holds Mahmoud Abbas, the head of the Fatah party, accountable for an entity that he heads which the U.S. Government defines as a terrorist organization.

The American government official responded, “The U.S. Government views Abbas as the head of the Fatah, and the Fatah as separate and distinct from the Al Aksa Martyrs Brigade.”

However, just 10 months ago, the U.S. State Department’s Annual Report on Terror linked Fatah and Al Aksa. In its section on the Middle East and North Africa, the report includes what it describes as “extremist groups in this region,” amongst which is listed: “the Al Aksa Martyrs’ Brigades (Fatah’s militant wing).” The report describes the entities on the list as being a “primary concern in the global war on terror.”

The State Department’s Terrorism Report goes on to describe the types of attacks engaged in by the Middle East extremist groups. Those tactics included “suicide bombs, rocket attacks, pipe bombs, mortar attacks, roadside bombings and ambushes, and shooting at Israeli homes and military and civilian vehicles.” Significantly, the report stated that four of the extremist groups already listed, one of which it names as “the Fatah-linked Al Aksa Martyrs Brigade,” were responsible for most of the attacks.”

Concrete evidence of the connection between Fatah to the Al Aksa Martyrs Brigade is available in abundance. Both Fatah and Brigades leaders, Palestinian Authority-controlled media and the documented transfer of money from Fatah to the Brigades for acts of terrorism, have been in the public domain for years.

Such information connecting Al Aksa and Fatah makes it clear that Rice violates American law by giving sanction to an organization which operates a terrorist organization and that has been designated by her own U.S. State Department as such.

This week, a Fatah member and terror group leader told the World Net Daily news service in Jerusalem that the Fatah party does not recognize Israel and that any final accord that does not include flooding the Jewish state with millions of Palestinians will not be supported by the Fatah party and will lead to Palestinian civil war.

“The base of our Fatah movement keeps dreaming of Tel Aviv,

Haifa, Jaffa and Acco. There is no change in our position. Abbas recognizes Israel because of pressure that the Zionists and the Americans are exercising on him. We understand this is part of his obligations and political calculations,” said Abu Ahmed, Fatah member and leader of the Al Aksa in the northern Gaza Strip.

Abu Ahmed went on to say that “there is an opportunistic class at the head of the Fatah leadership that for personal and political interests says it accepts the existence of Israel. There is no change in our official position. Fatah as a movement never recognized Israel. It is the Palestine Liberation Organization who did so for the reasons I mentioned.”

“We are in the Al Aksa Brigades because we are Fatah members. We participate in all political decision making of the Fatah movement.”

“Of course we are loyal to Abbas. He is our elected leader. We would of course prefer if his policy toward Israel was different but we understand his obligations and calculations, and we do not consider ourselves limited by these calculations,” Abu Ahmed said.

The Palestinian Media Itself Trumpets The Fatah-Aksa Link

For example, on February 5th, 2005, a letter was posted on the official website of the al Aksa Brigades. That letter was from the Brigades to the Fatah Revolutionary Council and quotes the late Yassir Arafat who officially declared the Al Aksa to be the “military wing” of Fatah. The Brigades promised in that letter to continue to follow the Fatah leadership of “the brother Abu Mazen.”

On August 4th, 2005, the official web site of Fatah ran an interview with a member of its revolutionary council. In that interview the Fatah council member was asked about the Al Aksa, to which he responded that they remain an integral part of Fatah, and that Fatah takes pride in the Al Aksa Martyrs Brigades.

On January 12th, 2006, the official Palestinian Authority Fatah newspaper Al Hayat editorialized that Mahmoud Abbas would have to use all of the Fatah’s forces in the election campaign, especially the Al Aksa.

Yael Shahar, a researcher at the International Policy Institute for Counter-Terrorism, described documents seized in a raid on Fatah chief Yassir Arafat’s headquarters. Amongst those documents were invoices from the Al Aksa seeking reimbursement for, among other things, explosives used in bombings in Israeli cities.

Another invoice discovered in Arafat’s headquarters was one dispatched by Al Aksa to Fouad Shoubaki, the PA chief financial officer for military operations, dated 16 September 2001. That document outlined expenses through September 6, and asked for money to build additional bombs and to finance propaganda posters promoting suicide bombers.

The documents uncovered in 2002 constituted the first direct proof that the Al Aksa are not a “rogue militia” as Arafat had claimed earlier. Instead, as Shachar put it in her 2002 article, “its members were on the Palestinian Authority’s payroll, its activities are financed out of Palestinian Authority coffers, and that its attacks are carried out with the knowledge and backing of Yasser Arafat’s inner Fatah circle.”

Those internal documents showed that Shoubaki was also responsible for financing the activity of the Al Aksa Brigades in the Bethlehem region, transferring monthly salaries to the organization’s activists in the area.

In addition, documents seized by Israel from Orient House, the PA’s former East Jerusalem headquarters, show that the PA had transferred funds to Fatah’s affiliated fighter groups such as Tanzim and the Al Aksa.

Colonel Miri Eisen, then a senior Israeli intelligence officer and now the Spokesperson to Foreign Journalists for Prime Minister Olmert, was the ranking officer who presented the document to the media at the time. Eisen pointed out that in the time since the letter was sent, the Al Aksa Martyrs Brigade had carried out eight suicide bombings in Israel. In addition, the group had by then carried out about 300 attacks in which Israeli civilians were killed or wounded, including roadside ambushes, drive by shootings, and car bombings. “You could probably call this a terror invoice. How much does terrorism cost?” Eisen asked reporters.